THE KINKS ARE THE VILLAGE GREEN PRESERVATION SOCIETY AT 50 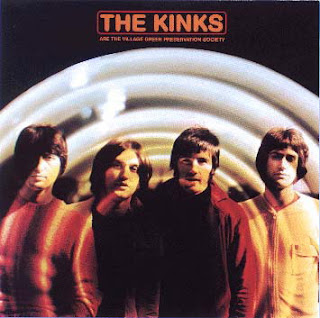 The songs that grace this high watermark in the Kinks discography are some of the finest that Ray Davies would ever submit for public consumption. High praise indeed as he was in the midst of an incredibly inspired composing run. "Sunny Afternoon", "Waterloo Sunset", "Autumn Almanac" and the brilliant Something Else by the Kinks LP had all showcased an embarrassment of riches in terms of pure quality.

In part, Village Green offers up a fond, poetic obituary for a fictional place in the distant past. The added bonus comes in the use of interesting stylistic, musical detours which maintain listener engagement throughout. This should have been a universal smash for the group. The release date would not be an auspicious one for the set. Falling on the same day as The White Album, the disc was overshadowed by this seismic event along with the offerings of other heavy hitters during this timeline (Beggars Banquet, Electric Ladyland had also hit the shops at this point). Lacking proper promotion (new albums weren't hyped half as much as they are today) and with the Kinks still banned from touring in the US, it sank commercially. Lyrical subject matter was well out of step with the psychedelic vibe that was prevalent at that time, which also didn't help matters.

"While everybody else thought that the hip thing to do was to drop acid, to do as many drugs as possible and listen to music in a coma, the Kinks were singing songs about lost friends, draught beer, motorbike riders, wicked witches and flying cats."

One additional wrench in the works was a decision to put out a different iteration of the disc for the European market. This version had 12 tracks, omitting "Last of the Steam-Powered Trains", "Big Sky", "Sitting by the Riverside", "Animal Farm" and "All of My Friends Were There" and adding "Mr. Songbird" and the excellent "Days", which had already scored in Britain as a single. The record company restored the aforementioned tunes (removing "Mr. Songbird" and "Days") for the more familiar 15 cut sequence that went out to residents of the US and UK.

Are you with me now?

Fairly weighty thoughts, for a 24 year old, also shape "Do You Remember Walter?". The frustration felt by the inability to reconnect with a childhood friend who has succumbed to complacency is a universal subject. Jeff Lynne tipped his hat to it nearly a decade later in the opening of ELO's "Mr. Blue Sky" which matches the piano and drum intro exactly.

"Walter, you are just an echo of a world I knew so long ago
If you saw me now you wouldnt even know my name.
I bet youre fat and married and youre always home in bed by half-past eight.
And if I talked about the old times you'd get bored and you'd have nothing more to say."

Growing old wasn't a common theme in the music of the late 60's, though the first line of "Picture Book" suggests that you imagine yourself doing just that. Looking over your shoulder at the past, all the usual suspects show up while thumbing through an album of dusty photos. Davies was reportedly going through a patchy period in the mid sixties, suffering a depressive episode. Better spirits recovered, childhood memories of bed and breakfast, seaside vacations in "those days when you were happy, a long time ago" were channeled into his work.

"Big Sky" seems to be an impassive watcher of all that goes on below it, with lyrics that suggest an anti religious sentiment. ("Someday, we'll be free...") The band plays hard here (and on "Wicked Anabella"), without regressing to the sound of their early, almost punkish singles.

Music hall now made an appearance in certain arrangements, yet this would not figure as prominently in Davies’ playbook until the early to mid 70's. Proceedings do take a strange turn, at times. Noel Coward on acid fuels the vari-speeded "Sitting By the Riverside", though the full on psychedelic path is purposely avoided. Because of this, the band also fell out of sync with then current trends. Production values were not at the level of the Kinks' contemporaries, allowing distorted sounding drums, bass rumbles and guitar buzz to remain. Getting sounds to tape without overloading the tracks would have greatly enhanced the overall audio experience.

The material was strong enough to get by this fact, though it's a minor annoyance.

Let it be stated that though the majority of the compositional load fell on Ray, brother Dave contributed a lot in shaping the final product. His input is truly deserving of co-credit. Similarly, kudos are in order for the tastefully solid foundation work of Quaife and Mick Avory. They had stretched as a functioning unit, their touch turning far more subtle in the relatively short journey from the early, proto-metal blasts of pure riff-rock that brought them to prominence in 1964.

Village Green presents a kinder, gentler Kinks, if you will. All is viewed through the lens of a quasi-pastoral existence, "far away from the soot and noise of the city" where life is quiet.

"I tried to write about what I knew, and that was the neighbourhood I grew up in. All of those songs were inspired by characters who lived, probably, 100 yards away from me. But they also pick up on a kind of wistful and ironic facet of English culture. English people are a little bit wistful and mundane - and I like the people that have little quirks in their lives and low-achieving people. I think they're worth writing about. It's something to do with the English culture and dark humor and the way we look at the world."

Bassist Pete Quaife named "Animal Farm" as his favorite track saying that, "the song gave him shivers when he first heard Ray banging it out on piano." "Starstruck" continues on an ethereal path, with mellotron supporting the lyrical reading of an individual that gets caught up in fast living, chasing after a rock star. A promotional film was made for this one, the last featuring the original lineup.

Lovely sonic surprises crop up as the needle travels across the grooves. "Phenomenal Cat" musically echoes what Syd Barrett had been doing on Piper at the Gates of Dawn., with bizarre, sped up elfin voices unsettling the once upon a time, fairy story atmosphere "Monica", by contrast, slips into a latin jazz. Sarcastically funny, "People Take Pictures of Each Other" is a cruel version of picture book in which the author expresses his distaste both for being photographed and being stuck, sitting for hours perusing them.

Completely deflating the yearning, nostalgic theme of the album, it employs a soundtrack flown in from a distant generation to completely kill all that came before. It is nothing less than a masterstroke of sequencing as the curtain drops.

My own trip into the past comes into play here. Being steered toward this record opened another important door in my musical education. Flashback to summer 1981: Twelve year old me is in a familiar place, flipping through the stacks of a local record store. An older man who took notice of the titles that I was looking at approached me.

You really like 60's music? Have you ever listened to the Kinks?

I really hadn't, except for "You Really Got Me".

He went on to explain why they were great and that "The Kinks are the Village Green Preservation Society" was the one to seek out. Prophetically, he also said that I should buy lots of Stones albums as they would probably be making records for another twenty years or so. Never did see that guy again, though he was very wise. It took some time to fully appreciate Ray Davies' genius, though his body of work puts him in the same class as the premier songwriters of the sixties. Should you should sell a family member or a kidney to get a copy of this album?

Concerning the low profile of this wonderful set, Ray himself once jokingly noted that, "Even the people who talk about Village Green probably haven't heard it."

Fortuitously, subsequent generations have been exposed to the magic of this timeless classic via some long overdue repackaging love. First came the 2004 deluxe edition, which shoveled up much of what was recorded during these sessions on three CDs, in better fidelity. 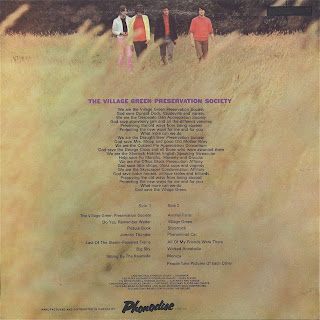 In grand celebration of its 50th birthday, the "Superdeluxe" package leaves no stone unturned, giving the Superfan 11 discs and a staggering 174 selections to become immersed in. Pop into this link for all of the details. Sadly, they don't make 'em like this anymore.
Posted by Sean Coleman at 4:42 PM