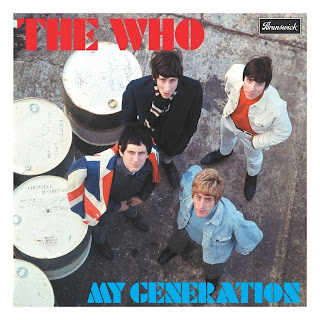 Even after being presented with the sheer significance of this record, the jaded contemporary listener may still stifle a yawn and wonder what all the fuss is about. After all, even casual music fans have had a taste of grunge, punk, death metal, hardcore rap and other genres where volume and violence win the day. So what's the big deal?

Landing on the scene with a force equal to several megaton bombs, The Who's debut set contained elements that were without precedent in 1965. Pete Townshend's forays into feedback, John Entwistle's astonishing bass chops and an eight-armed, teenage dervish named Keith Moon who attacked his drum kit with an intensity unmatched in rock, drove the songs on this remarkable album to greater heights.

Occupying a very curious position in the pecking order of the truly great rock bands that emerged from the UK in the early sixties, The Who managed to both insult and influence their contemporaries all at once.

Getting to the point where they were ready to record their first LP was an arduous process. Their set list was, for the most part, made up of R & B/Motown covers alongside rock standards with the occasional detour into surf music. By 1965, The Beatles had established new rules of engagement for groups going into the studio. If you weren't crafting your own material, your fate was left in the hands of outside songwriters. When that well dried up, so did your career.

Roger liked the status quo, playing songs that people knew and reacted favorably to. The Who needed to grow a writer if they were to progress. With much encouragement from their manager (Kit Lambert) Townshend stepped into this role, though Daltrey was not on board with doing original material at first. There was a power play involving his leadership, as Roger was the one who put things together in the first place. Doing Pete's tunes meant losing part of that power, though it was the only sure way to garner notice from someone who was established in the business.

Townshend had written a song that was intentionally similar in structure to the hits that Talmy had produced for The Kinks. Designed to grab Talmy's ear, he heard it over the phone and was impressed enough to bring the quartet into the studio to lay it down. Management made an extremely lopsided deal with Talmy in exchange for him shopping the disc to his contacts at various record companies.

Remarkably energetic, "I Can't Explain" put The Who on the map in the UK.

Keith Moon provided the band with a built in hydrogen furnace. His gun shot smacks on the snare in the break before the chorus and inventive rolls provide the fire, pushing the rest of the band to play harder. The follow up single ("Anyway, Anyhow, Anywhere") was greater still, with early guitar pyrotechnics courtesy of Townshend's growing bag of tricks.

Rehearsals for the sessions that would produce My Generation kicked off in the fall of 1965. Captured in mono, the sound is aggressive, with most every song aiming to tear your head off. In many respects, the Who engine was likely far too powerful for the studio frame of that time. VU meters are buried well into the red, unwittingly creating the "indie" style well before its time. Leading the attack is Moon, who shreds all rock drumming conventions and proceeds to set new skin-bashing standards on each track. There is a small concession to Roger as the three covers offer a glimpse of the band's "Maximum R & B" personality. Hindsight being what it is, it's quite easy to see that the Who would have had very slim prospects for success had they not forged their own musical identity. These performances are alright, though they represent the most dispensable portion of the LP.

There is a cockiness that pervades here, drop-kicking convention over the ledge from twenty floors up, watching it smash to bits on the ground. This exact energy went into the execution of the title track, which destroyed everything in its path in 1965. Leaping out of the speakers today, it is no less compelling. Moon beats the living shit out of his kit, Townshend and Entwistle ride the crest of his madness as they hug those power chords and Daltrey spits out the lyric with a contempt that's palpable 45 years away.

Topped by four "fuck you" bass solos from Mars

Entwistle ripped the strings off of three Danelectros (he had to buy a new instrument for each pass as it was the only way to get the strings that came with it) before completing his mission and sealing his position as one of the most innovative rock bassists of all time.

Ratcheting up the tension with a key change, the end game comes with anarchic feedback as Moon flies over every tom, empty paint can and anything else within striking distance. There was nothing to touch this in its time. In the intervening years, Townshend has talked himself down a long hallway, past the ice machine, through a fire exit and up his own arse trying to explain away that infamous line. No matter, as it doesn't detract one iota from this ridiculously inspired performance.

Sure enough, the runner up in the pack is "The Kids Are Alright" which makes use of the poppy, close harmony driven style of some of their contemporaries, though they bring it home with enough of an edge that it avoids being cute. Both Moon and Townshend have solo moments that soar (you can't miss them). Townshend's writing style was definitely unique from the beginning and he would continue to flower in astounding fashion. "A Legal Matter" pounds along, aided and abetted by the imaginative keyboard work of Nicky Hopkins who battles it out with Moon over a droning chordal structure. (Hopkins provides the glue that centers several cuts.) The riff creeps in occasionally to tie the whole thing together, though the lyrics touch on unconventional, quirky subject matter for the time. Sort of an anti-love, not going to be happy together forever thing happening. "The Good's Gone" shares the same cynical lyrical mood and the work is quite mature given the tender age of its creator at that point.

Special mention goes to "The Ox" an instrumental which showcases Moon, Entwistle, Townshend and Hopkins performing a mixture of anarchic noise and a British interpretation of "Wipeout", although any lines previously drawn in the surf are crossed here by 100 miles. It is one hell of a performance.

The Keith Moon show was officially in full swing, as it is his drumming that stands out on one of the most ear-catching debuts in rock history.

Of course, the band publicly disowned the album shortly after it was released, citing the fact that it was a rush job.

In the US, the disc was issued in early 1966 with a different cover, title and did not include "I'm a Man", which was replaced by "Circles". It would be another year before the group started to develop a following in North America. 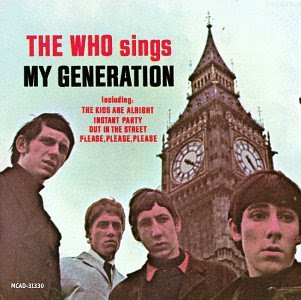 The Who singing My Generation? Much too polite. Slaying their generation by inspiring them out of their skulls is more like it.
Posted by Sean Coleman at 9:18 PM 1 comment: Links to this post 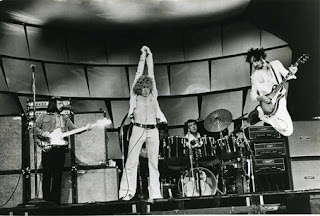 One of the most exciting bands to come out of the UK in the mid sixties, bar none. Their influence was far reaching in terms of musicianship and presentation, especially when you look at the stage acts of their contemporaries. Equipment suffered, audiences were shocked (initially) and the group went deep into debt as many of their early shows culminated in a wave of instrument destruction. They would not be consigned to the garbage heap of gimmicky, one trick ponies in the fickle world of rock, though.

Peter Townshend, John Entwistle, Keith Moon and Roger Daltrey produced a string of the most powerful, imaginative discs of the 20th century. I am going to tackle all output recorded by the original line-up, from their 1965 debut through to their last release prior to the death of Keith Moon in 1978.

Posted by Sean Coleman at 6:06 PM 2 comments: Links to this post