GENESIS - SELLING ENGLAND BY THE POUND 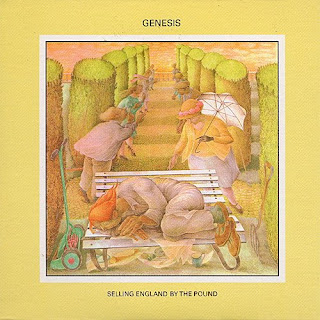 Progressive rock hit a definite stride in the early 70s with a number of groups exploring the outer limits in grandiose fashion. Traditional three minute pop songs disappeared into album length presentations. Themes were varied, solos interminable and audiences were invited to lose themselves in fanciful flights of imagination, which could be mind blowing depending on the quality of your stereo equipment.

Having a decent stash didn't hurt, either.

Your patience is required.

Fortunately, it is rewarded with Tony Banks quasi classical keyboards that enliven "Firth of Fifth", complete with an excellent guitar solo from Hackett. The relatively brief (but great) "I Know What I Like (In Your Wardrobe)" came as close to "a hit single" as this incarnation would manage. Mike Rutherford's sitar lines are tasteful, employed much in the same manner as Steve Howe's work with the instrument.

Incorporating theatrical presentation, costumes and genuine stage presence, Peter Gabriel gave the band an incredible visual dynamic. His vocal style infused their work with soul. The others were hidden behind keyboards or drums (in Steve Hackett's case, seated for the duration of live performances) rooted in place, faithfully replicating the complex arrangements of their recordings.

Banks and Rutherford were driving forces with respect to composing at this time, though everyone contributed ideas in what could best be described as a song writing collective.

There are some interesting glimpses into the future found in Hackett's use of fretboard tapping on "Dancing With the Moonlight Knight", prefiguring Eddie Van Halen's revolutionary expansion of the technique by five years. Phil Collins also steps into the role of lead vocalist on "More Fool Me". His playing is inventive and solid throughout.

Seriously fine contributions from all members puts this in contention as one of their best efforts.
Posted by Sean Coleman at 9:23 PM No comments: Links to this post