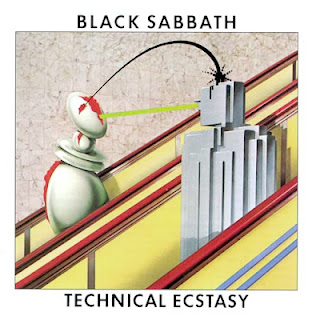 Deemed by many as the first real misstep in the Sabbath discography, Technical Ecstasy was only tepidly received upon initial release in 1976. There was much made of the fact that Birmingham's purveyors of doom had moved well away from the the sonic blueprint that had captured the imaginations of listeners in the early seventies.

Did I really hear strings plastered all over that intro?

And who's that bloke singing the other slow number??

Perhaps some of the die-hards had quit listening after Master of Reality. As early as Vol.4 there had been a piano based ballad ("Changes") which featured string parts reproduced on a Mellotron. Similarly, strings, synths and keys figured prominently on several tracks on both Sabbath Bloody Sabbath and Sabotage.

Another point of discussion was the change in Iommi's guitar tone. Criticism came from those who felt that he had abandoned the sludgy, monumental riffs that had effortlessly flowed from his detuned Gibson in favor of a lighter approach. More of a "light and punchy" sound that the entire family could enjoy.

Yet again, this transition had begun four years earlier with Vol.4. Feeding his signal through a Rotosound effects box on Sabbath Bloody Sabbath gave his sound a swirling, organ-like texture. These changes had a gestation period of several years.

OK, if this is such a great album, why haven't more people heard it?

Simply a case of a band not playing to type.

As evidenced by the expansion of the band's musical horizons over the course of their (then) most recent three studio projects, Technical Ecstasy merely added another layer of experimentation. Fans that wanted Sabbath to continue on their former, heavier path were turned off by the move closer to the middle of the road. For the casual admirer, there just weren't enough hooks on which they could hang their hats. Worse still, soft rock was becoming the prevailing noise heard on radio with the rumblings of disco poised to grab a larger share of the market.

Given these circumstances, Technical Ecstasy didn't have much of a chance. Metal supporters just didn't hear a lot that they could relate to and the leisure suit crowd were likely unaware that it was issued in the first place.

Thus, the LP became somewhat of a curio.

Personally, I have been listening to Sabbath since the early eighties. At that time, this one was hard to find. A good friend, who had obtained a vinyl copy on import from the UK, was kind enough to tape it for me. The songs very quickly entered my listening rotation. This is actually a very solid effort, with much to be commended. Not their finest hour but if you focus on the merits of the best cuts, the rest are certainly inoffensive. The lyrics don't hold up to heavy scrutiny, though that's a minor point.

"Back Street Kids" literally kicks down your door, grabs you by neck and commands attention. Metallic, hard and fast with a refrain that his Ozzness would return to during his solo career, the visceral nature of "nobody I know will ever take my rock and roll away from me" is interpolated by a bridge with a choppy, tango-esque time signature change. The full stop that precedes it has a neat Iommi riff, which competes with flourishes on synth as Ward expertly steers the group with ride cymbal and toms. Highlight reel material.

"You Won't Change Me" is a close runner up. The intro harks back to the doomy figures that once powered the Sabbath engine, though an abrupt halt is brought to this. Dark and spooky organ takes over and the entire performance, paced at mid-tempo, is quite mature in terms of subject matter. Ozzy's vocal is committed, even soulful, while the tune balances melody with a blistering solo from Tony to ice the cake. Cigars for all involved here.

"Dirty Women" takes a bit of build up to get to the point. Worth sticking out the journey to get to those monster salvos that Iommi wrings from his axe. The bonus face melters over the top are welcome. Again, we get a glimpse into how Ozzy would construct future efforts (with plenty of help from his hired guns) in the "walking the streets" breakdown. Very similar to the middle section of "I Don't Know" from Blizzard of Oz. Check it out...

"All Moving Parts (Stand Still)" has a fairly strightforward theme, though it squeaks into this short list by virtue of how expertly the musicians shift gears midway through the presentation. Keeping time to what begins as a slightly plodding construction, Bill Ward unleashes a scattershot drum pattern and the game is raised as the trio brilliantly execute a number of tricky transitions. As quickly as it begins, the listener is unceremonially dropped back into the opening progression which is carried to the fade. Iommi demonstrates a wealth of ideas that he casually drops into the mix of an otherwise nondescript template.

What remains is a mixed bag. You get to hear Ward take lead vocal on the Beatley "It's Alright", where he channels the lighter side of John Lennon. He acquits himself quite well, matter of fact. Melody is highly emphasized, though the selection is quite out of place here. Similarly, "She's Gone" is heralded by a string arrangement that is both economical and avoids overt sentimentality in feel. Acoustic guitar is the only other support to Osbourne's voice, which conveys enough emotion/pathos to allow for the audience to commiserate with him. "Rock and Roll Doctor" and "Gypsy" fill their spots in workmanlike manner, with the former coming close to sounding as if Ozzy was fronting KISS for a session. The latter is a decent idea that is a bit overstretched.

Fueled by a shipment of Newcastle Brown Ale and whatever recreational drugs were around to be consumed by the lads and their crew, the creation of their seventh record saw the quartet at the crossroads. Their immediate future as a functioning unit was tenuous, mostly due to bad habits. Despite these issues, full marks are awarded to them for stretching out a bit further, creatively.

Passage of time has also helped to soften the initial, harsher estimations of Technical Ecstacy. With little trace of quintessential Sabbath to be found, however, it was destined to become a forgotten item.

Now that you do know about it, please give it a little love. You may be pleasantly surprised.

Posted by Sean Coleman at 4:45 PM No comments: Links to this post

George Martin booked The Beatles into EMI Studios on Abbey Road to record the bulk of their first album, Please Please Me.

The sessions began that morning at 10am. The group logged nine hours and 45 minutes of recording time, banging out ten songs live off the floor and adding a few (but not many) overdubs. Further stress came with two members of the band suffering through mid winter colds. You can hear it in the vocals. Medicating their throats with a steady stream of tea, cigs and lozenges, they made it through. It is a remarkable achievement, all in a day's work. Their previously issued singles (with B-sides) were added to bring the total number of LP tracks to fourteen.

These days, simple mic placement can swallow up precious hours...

Exactly one year later, they would be playing their first US concert at the Washington Coliseum. Their reception in the States exceeded all expectations. 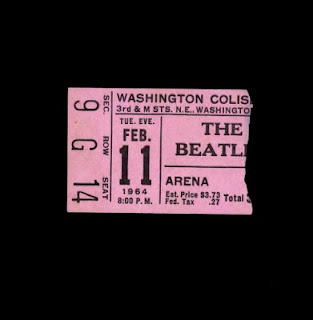 This date proved to be quite auspicious for the Beatles. The rest is history...

Posted by Sean Coleman at 7:30 PM No comments: Links to this post 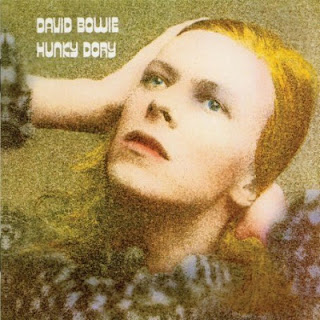 Still relatively unknown at this point, Bowie crafted a very intelligent set of songs that would later be held in quite high regard. Better still, the actor within the musician brought a voice to the sessions that conveyed a maturity well beyond his 24 years. At times, his vocals sound cracked as though they were being delivered by a man in the twilight phase of life. There is also a confidence that emanates from every note, beginning with the brilliant "Changes" and following through on each subsequent track until "The Bewlay Brothers" gracefully fades into the run-out grooves.

Now that you've found another key, what are you going to play?

All of the pieces in the puzzle came together for these sessions. We have the "Spiders from Mars" (Mick Ronson, Trevor Bolder and Mick Woodmansey) great tunes and a major label deal. Adopting the trappings of the burgeoning "glam" movement would be the final step toward attaining the fame that would come during 1972 with The Rise and Fall of Ziggy Stardust.

Bowie also enlisted the services of Rick Wakeman, whose virtuosic piano figures prominently throughout. (I wonder if he wore a cape while he was tracking?)

Orchestral and horn arrangements are deployed effectively, augmenting, but never burying, the great melodies on offer. "Oh You Pretty Things" and "Queen Bitch" foreshadow the sound of "Ziggy". Ronson pulls distinctive, crying notes from his Les Paul adding further depth to the powerful, "Life On Mars". These selections, along with "Changes", provide the highlights on a very strong disc. "Kooks" is a charming runner up, taking a stylistic page from Neil Young's "Til the Morning Comes" with well placed horn solos.

Name checking Andy Warhol and Dylan with fulsome tributes, the lyrics are incredibly well developed. Smart without sliding into pretense, he keeps you interested by carefully pruning each line. Verses contain only what is completely necessary. The extra sweat sacrificed to make this happen was well worth it. Music hall quirks, otherworldly noises and an entirely English sensibility all find their place in the mix with a healthy dose of camp. The recipe works well enough to earn Hunky Dory a place in the top five LPs that Bowie would ever produce. Given his distinguished career output, that speaks volumes.

Posted by Sean Coleman at 11:00 PM No comments: Links to this post