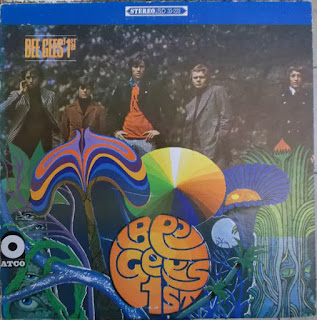 Supposing that this record was a room, then its contents would certainly bear the hallmark of opulence. Rare paintings adorning the walls, with furnishings and fixtures from an interior decorator's wet dream to complete the space. Cracks and blemishes? Sure, a few are present, yet the sheer brilliance of the cornerstone pieces divert your attention from any surface flaws. The brothers Gibb dipped their cups into a well of songwriting riches early on, always coming up with them filled to the brim. Bee Gees 1st was actually their third full length release, though it was the first to be issued internationally.

Truly fine it is.

Even a cursory listen will reveal that these lads possessed sharp melodic instincts, harmonic gifts and an intrinsic knowledge of song craft well beyond their years. To put things in perspective, while in the midst of writing and recording this material, Robin and Maurice were 17. Barry was the elder statesman at the tender age of 19. 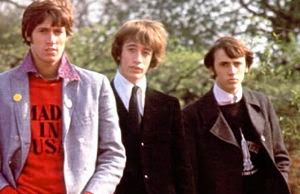 This set appeared at the height of the Summer of Love, a window of time which saw an incredibly eclectic crop of musical styles unveiled to an unsuspecting public. The Beatles had recently set a very high bar with Sgt. Pepper in June, casting a daunting shadow over their contemporaries at that point. To their credit, the Bee Gees held their own, turning out high quality, easily assimilated work on this LP. While some content is redolent of the sonic template that the Fab Four had established on Revolver the previous year (which evolved exponentially on Pepper), they did have their own artistic voice. With Colin Petersen (drums) and Vince Melouney (guitar) on board as full fledged members, the quintet was also a legitimate performing entity. This lineup would stay intact until 1970.

Percentage wise, exceptional songs are the rule here. No less than five tracks from this platter found their way onto their first hits compilation in 1969 (Best of Bee Gees). These selections all have a distinctive flavor, caressing the neural population in your auditory cortex in a manner that will not allow your brain to shake them easily. Catchy yet curiously minor key morose at their core, they played a major role in bringing the Gibbs to the attention of the masses.

"Holiday" sees Barry taking lead vocal honors to set things up ("Ooh, you're a holiday/such a holiday") with Robin's distinctive quaver taking over in short order (beginning with "It's something I thinks worthwhile"). They deliver a lyric that likens a romantic partner to a vacation or trip. Possessing a high haunt count, the melody grabs you immediately. Whether "the puppet makes you smile" or not isn't the point. When writing about love and relationships, they were deliberately vague in framing the narrative. In an excerpt from Daniel Rachel's fascinating book,The Art of Noise: Conversations with Great Songwriters, Robin explains the process:

"Holiday" was written on an autoharp...There have been songs called "Holiday" since, but we were probably the first group to write a song called "Holiday" about a relationship...Songwriting is not so much about the obvious; it's about going around the houses and looking at it from a different angle.

Hitting the top ten at that time in the singles sweepstakes, this one still resonates even a half century removed from that era.

Grim subject matter frames "New York Mining Disaster, 1941", yet they take the plight of those trapped by an underground collapse and turn it into a conversation. Following a very solemn intro, the music breaks out of its straight-jacket, building in intensity and speeding up in an unorthodox fashion.

Have you seen my wife, Mr. Jones?/ Do you know what it's like on the outside?/Don't go talking too loud you'll cause a landslide...

The orchestral arrangement is ideal with those iron clad harmonies tying it all together. Viewed through the Gibb's lens, there is no resolution, only resignation when it comes to the doomed crew, sealed in miles below the surface of the earth. Oddly enough, Rupert Holmes may have taken inspiration from this when he crafted "Timothy", which was a minor chart hit for The Buoys in 1971. In a "you-have-to-hear-this-to-believe-it" scenario, the protagonist is singing about being snagged in a mine cave-in with Joe and Tim. They are located and freed, though only two survive to tell the tale. The inference is that they resort to cannibalism, consuming Timothy to stay alive while awaiting rescue.

Moving to more conventional fare, "To Love Somebody" is a quintessential torch song that Barry draws every iota of raw emotion out of in his vocal. Achingly powerful in a visceral sense, a debt to the Motown sound is quite obvious in the arrangement. This one cuts to the chase beautifully, has been widely (deservedly) covered by other artists and boasts an incredible hook. Anyone who has been on the short side of love can relate. "I Can't See Nobody" emerges as its natural companion, with the refrain again bringing home a universal sentiment: love can blind you to all other available options. All four aforementioned compositions managed to grab the public imagination in a big way, despite having an underlying sadness about them. There is catharsis in suffering, though it helps to have such innovative soundscapes to soften the hard medicine in the messages.

Maurice emerges as multi-instrumentalist extraordinaire in the unique, psychedelic and quite startling "Every Christian Lion Hearted Man Will Show You". Mixing Gregorian chant, mind bending mellotron and a good deal of confidence in pulling this one off, there is much to be commended in terms of its construction. Beautifully "out there", they never attempted anything even remotely like it again. An exercise in good intentions gone right, it remains "trippy" as of this writing.

Circling back to my earlier comment about stylistic comparisons to that quartet from Liverpool, the Klaus Voormann designed cover art wasn't the only linkage to Revolver to be found here. "In My Own Time" runs uncomfortably close to the structure of "Taxman" with jagged, distorted down-strokes on rhythm guitar and McCartney's bass line showing up with little alteration. Drop-dead perfect emulation of John/Paul/George three-part harmony makes you forget about this and marvel at how dialed in the lads were as singers. Sharing DNA didn't hurt, either. The drawing room harpsichord that drives "Turn of the Century" nudges into Pepperland territory ("Fixing a Hole"), though they counter that by running the clock back to examine life through the eyes of those souls that witnessed the last gasp of the 1800s. "Craise Finton Kirk Royal Academy of Arts" is pure English musical hall, very much in the vein that Ray Davies was mining in his work with the Kinks as they turned away from riff-based rock in the mid-sixties. My personal favorite of the deep cuts is "Cucumber Castle". Brief with esoteric strings that serve to enhance the song, rather than smother it, the title would be recycled for a future project. It would represent a difficult chapter in their career that saw Robin leave the fold for a short time to embark on a solo venture. Happily, all differences would be patched up amicably. Flashing back to 1967, hard work and talent aligned perfectly to bring the first taste of fame to the Bee Gees.

Returning to my dog-eared vinyl copy to take in this gem was easy. Even the second tier tunes have merit and properly listening again after a long time away has renewed my appreciation for them as composers. When the band comes up in conversation, people tend to immediately flash on the trio as they appeared at the height of Disco-mania in the late 70s, when the Saturday Night Fever film soundtrack dominated radio playlists. Multi-faceted as writers, musicians and prodigiously talented singers, the ingenuity that fueled Bee Gees 1st was impressive, establishing them as a creative force a full decade prior to this. If it's not already part of your collection, grab it. One of their best records, bar none. 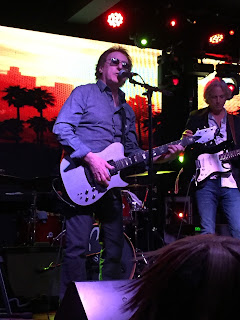 Denny Laine, along with a very talented group of musicians, brought a venerable recording to life last Thursday evening. Performing the Band on the Run album in its entirety, with a further mix of Wings and Moodies selections, Laine and his wrecking crew owned the stage, leaving two packed houses deliriously happy in the bargain. Weaving in some humorous banter between songs, the newly minted member of the Rock and Roll Hall of fame appeared relaxed and graciously shared the spotlight with his band mates. Each took a turn at the mic, flawlessly executing their daunting lead vocal tasks. No mean feat, it is a high compliment to their collective abilities as singers.

Vocal harmonies were impeccable ("Mamunia", "Bluebird"), extended guitar solos inspired ("Helen Wheels", "No Words", "Nineteen Hundred and Eighty Five") while the group maintained a perfect balance of spontaneity and adherence to the arrangements. Laine joked that they were "not a tribute band" because of their resistance to playing the numbers by rote. His comment is given significant weight by virtue of one irrefutable fact.

He was there when these songs first took shape in the studio...

Despite the complexity involved in putting across this LP in a live setting, without a net, it was successful on every level.
The crowd knew every word, with the master of ceremonies delivering on the promise of a high energy performance. Front of house sound was pristine, the size of the venue was ideal to catch every nuance and the set list was a virtual highlight reel. As "Nineteen Hundred and Eighty Five" was building to that classic crescendo, everyone in the was on their feet, swept away by a killer musical experience.

There was more to come

Denny roared through "Time to Hide", one of his underrated gems from Wings at the Speed of Sound and showcased some tasty harp playing. In addition to leading a particularly fired-up "Sprits of Ancient Egypt", the caffeinated version of James Brown's "I Go Crazy" from the first Moodies disc was another welcome surprise. Closing with the ballad that he has long been most closely associated with, "Go Now" wound down the proceedings with class. Truly superb evening and it was an absolute pleasure to be in attendance.

Denny's partners in crime are all top class players in their own right. Most reviewers are remiss in failing to mention those key individuals in supporting roles. All of the following gents may take a virtual bow.

Benjamin Lecourt- In addition to expertly steering the ship through the shifting sands of various time signatures, brought his bilingual skills to the fore during "Picasso's Last Words".

Brian Pothier - Bouncing between acoustic 12 string and electric lead guitar, his feel and tone were spot on. Impressive, precise slide work, as well.

Erik Paparozzi - Serious chops on the low end, though he ran all of Paul's bass lines respectfully and hit impossibly high notes with ease on every vocal turn. Quiet captain of the team.

Special mention goes to the songs themselves. While the adversity faced by Paul, Linda and Denny during the making of Band on the Run has been well documented, the lyrics and melodies themselves reveal no trace of these stresses. Instead there is an underlying theme of escape, flight, speed and joyful confidence infused in every note. The material itself was not tied to any political or socio-economic stances of the era allowing it to remain fresh in 2018. Watching it happen live provided a renewed respect for the continuous creativity that powered the LP.

Message to all who take the time to read this. If Denny is taking his act to your city this year, do whatever it takes to secure tickets. This gifted man is generous with his time and puts on an amazing show. Find out more about Denny Laine's future musical plans at his page
Posted by Sean Coleman at 2:24 PM No comments: