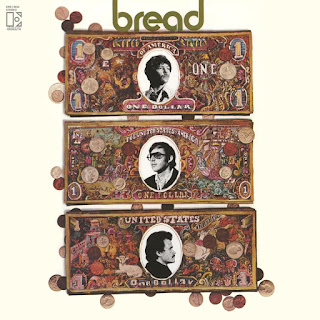 Bread were unfairly written off as insubstantial peddlers of soft rock when compared to their contemporaries, though the quartet that gave birth to that beautifully crafted, eponymously titled first album were all very accomplished writers/musicians. Signed to Elektra Records, label head Jac Holzman oversaw production and Bruce Botnick (who engineered all of The Doors classic LPs and co-produced LA Woman) was behind the board for this timeless debut.

Side one is immaculate, leading off with the one-two punch of “Dismal Day” and “London Bridge”, both composed by David Gates, whose lead vocals would become a signature part of their sound. He split writing duties with charter members Jim Griffin and Robb Royer. The fourth player involved was session drummer Jim Gordon who anchors everything with precision, giving the material a feel and groove at least three summers ahead of their peers. All lyrical subject matter neatly avoids the trappings of the era, with a focus on tightly edited pop/rock. No sprawling, tedious jams find their way into the program, though hooks and melodies definitely take priority. Other highlights include “The Last Time” and “It Don’t Matter to Me” which are the best Griffin/Royer compositions in the pack. While the second side of the disc isn’t as strong as what precedes it, the tunes still maintain the high standard of the overall set. ”It Don’t Matter to Me” finishes as one of the most delicately rendered pieces, featuring brilliant harmonies and Gates gently scraping the stratosphere with his lead vocal. Not satisfied with it remaining as a very worthy sleeper cut, the strength of this beauty moved the group to re-record it and issue it as a single the following year. The fall of 1969 saw some major releases hit the shops with Abbey Road, Led Zeppelin II and Let It Bleed all coming out within the same timeframe. Bread acquitted themselves well, considering the competition. Overshadowed somewhat by the heavy hitters of that period, this quiet masterpiece holds up nearly fifty years on.

Posted by Sean Coleman at 2:18 AM No comments: Links to this post 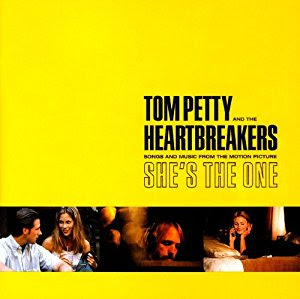 Perhaps the most under-appreciated offering in the lexicon of Tom Petty releases (runner up would be Let Me Up I’ve Had Enough) this subtle, nuanced record is everything that the movie to which it owes its existence is not.

She’s the One (the movie) is forgettable, capable of sending a meth freak into a stupor within minutes.

Not so the “soundtrack”, which is comprised of a mix of off-cuts from the banquet that was the Wildflowers sessions, some new material, two covers and scattershot “in-jokes” that are amusing to the right audience. Conversational marker on that last point. Only five of the fifteen selections found here actually made their way into the film as incidental music.

Before delving into the merits of this album, one sad fact remains. The sudden loss of Tom Petty still seems surreal two months on from the event. While the best of his output may have seemed effortless, it was pure, toughminded craftsmanship that shaped the finished product. Thousands of hours went into producing those melodies, with very little filler allowed to slip past quality control. His is an artistic voice that will be very sorely missed.

I can hear you singin’ on my supernatural radio…

THE BEST OF EVERYTHING

“Walls (Circus)” served as the lead off single, trailer to the full length disc and makes for an incredibly memorable opener. Custom built to lodge itself in the brain, the infectious chorus is hammered home by the 12 sting solo which gently reprises the verse. Out of the gate, an irresistible connection is made with the prospective listener. The other stunner is “Climb the Hill” which indulges Mike Campbell’s AC/DC fetish. Dig those Phil Rudd inspired cymbal crashes infusing the riff that follows the beautifully harmonized hook. Lindsey Buckingham adds his voice to both of these tunes. “Hope You Never” is the sleeper song that closes side one and ranks with anything that Petty ever coaxed out of his Dove acoustic. Straddling the line between beauty and bile, it manages to be charming, hurtful and haunting all in the space of three minutes. Suitable for framing, the same superlatives apply to “Supernatural Radio” which playfully quotes his friends Annie Lennox and Dave Stewart in the lyric. “Hung Up and Overdue” imports the feel of the late sixties in texture, while two ex-Fabs (George and Ringo) lend their prodigious talents to the track. The arrangement is nothing short of perfection, leading the pack in my personal highlight reel here. Harrison puts on a masterclass in understatement with slide guitar parts that play only in service of the song. Leave it to Ringo to steer the ship in perfect time. Rounding out these standout pieces are the delicate “Angel Dream” sequences
(numbers 2 and 4), which are complemented by soothing strings, exquisitely picked acoustic guitars and note perfect harmonies.

“Grew Up Fast” and “California” represent polar opposites in terms of what the Heartbreakers brought to the table. The former brings some shade into play early on. Though he didn’t share his general condition with the world at that time, divorce and a growing heroin habit took their place amongst writing and band activities. Things would get uglier in his personal life before he properly dealt with these issues. There is a down note that creeps into the material throughout, though “California” paints on a plastic smile and keeps things upbeat. Similarly, “Zero From Outer Space” channels mid-sixties Dylan with a muscular nod to Bo Diddley as the band powers through this slight, yet amusing romp. The covers fill out the set without really coming off as memorable. Beck’s “Asshole” is taken at a funeral pace, while Lucinda Williams “Change the Locks” overstays its welcome after the two minute mark. Both are dispensable. Lowlights aside, that still leaves plenty to love. Rick Rubin directed traffic from behind the glass as producer, the guests all add value to the finished product and you could eat your dinner off the pristine mix. This one holds a special place for me as it came out about a week before my 28th birthday. I remember being obsessed with “Climb That Hill” at the time, immersed in the reference points that informed much of the material. This brings us full circle to my comment early on about musical in jokes. The cover art should have depicted the entire band sitting in a smoke-filled room with classic vinyl littering the floor, collectively staring at the camera and sporting matching smirks that even a nuclear blast could not wipe off their faces. This is not a minor work by any stretch of the imagination. Well worthy of reexamination, She’s the One is a document that brings many sonic rewards with repeated spins. These charms are especially magnified by taking in a vinyl copy.

Posted by Sean Coleman at 1:37 AM No comments: Links to this post 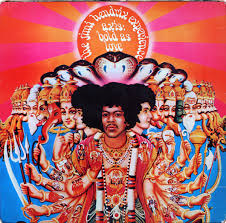 Otherworldly doesn't quite suffice as a description of the sonic delights that the Jimi Hendrix Experience wove into their second full length LP, released a half century ago this past week. The subtle genius who led the trio revealed himself to be a composer of considerable depth, turning in a set of songs that are as arresting today as they were at the time of issue. Let's travel back in time to that final month of 1967, where opaque clouds of smoke hovered over the astounded faces of those lucky souls who repeatedly sacrificed needles on turntables, worshipping at the altar of this incredible record.

It takes about half a day to get there...if we travel by dragonfly

Opening with a short "interview" that could almost be considered as the ultimate inside joke (look up Paul Caruso), the vari-speeded voices in their brief exchange set the stage for a barrage of raging coronal mass ejections, courtesy of Hendrix, which are madly panned across the stereo divide. The swooping, dive bombing assaults fade only to be replaced by the brushed drum fill that kicks off "Up From the Skies". Breezing by with a wink, this jazzy, wah-wah pedal driven flight of fancy is unlike anything from Are You Experienced. Hendrix delivers a subdued vocal that perfectly complements the track. Working against the aural template that he had crafted on the first disc, he and the Experience show a far more subtle side of their collective musical personality. You can almost imagine Hendrix taking his place on the bandstand with a larger group blending in as a contributor, rather than featured performer. Side one, which you could easily frame, then bounces back to rock as Mitch Mitchell morphs from Elvin Jones to a heavier approach as the trio lock in on the majestic “Spanish Castle Magic”. Jimi blasts off a handful of face-melters as Noel holds on to that hypnotic riff, though these type of guitar pyrotechnics are the exception rather than the rule here.

This may very well be the reason that this platter often gets passed over in the lexicon of the Experience. Those listeners expecting six string fireworks find the artist opting to play against type. Funky, tight rhythms are featured in “Wait Until Tomorrow” and note perfect nuance in the all too brief “Ain’t No Telling”. Both are variations on carnal pleasures, with a gun toting Dad to spoil the fun in the former. No room is made for endless soloing. nor is it necessary. Letting the songs breathe, dream imagery accompanied by a dizzying array of colors dominate lyrical subject matter. Hendrix wrote delicate melodies to match these ethereal moods, none finer than what you’ll find in “Little Wing” and “Castles Are Made of Sand”.

Noel Redding even draws in with his very own composition (“She’s So Fine”) singing lead and coming pretty damn close to the Who in places. Out of this treasure trove of inspired song craft, my personal highlight is the sublime “One Rainy Wish”. This is one that I always wish would never end. Dynamic and tasteful beyond description, it is incredible in headphones. Runner up? “If 6 Was 9”, which flies the freak flag proudly as a multi-part, extended freak out that allows everyone some room to rip. The spoken word section is the lone area where shade briefly eclipses the psychedelic rainbow that arcs over just about everything else. Though his other work attracted more attention, I would weigh in and say that this is his grand statement; futuristic and sweeping without ever overstaying its welcome. Wrapping up with the title track, nary a note is wasted. The Experience hit their high watermark with this one, though the tightly edited scripts would be tossed out the window during the sessions for Electric Ladyland, which had its share of high points, yet would fall victim to endless jams and a lack of organization from a production perspective following the departure of Chas Chandler.

Axis was the ultimate holiday gift from one of the masters. If you spot a vinyl copy, pay the asking price regardless of the amount. 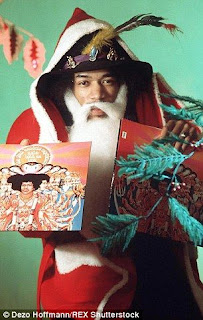 Posted by Sean Coleman at 1:08 AM No comments: Links to this post