SWEETHEART OF THE RODEO TURNS 50 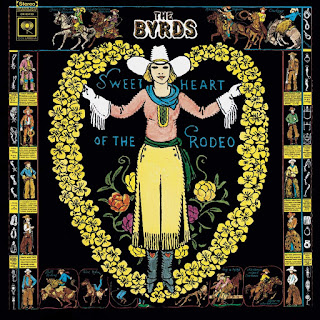 Indulgence in genre hopping seems fairly commonplace in the 21st century, so most contemporary listeners greet these shifts by their favorite artists with a resigned shrug. In 1968, The Byrds full on swan dive into country music was widely viewed by their fans as sacrosanct. The band had flirted with this style on a handful of tracks spread over their previous five LPs, though they never fully committed to it. This type of musical cross-pollination wasn't entirely unprecedented at that time. Jerry Lee Lewis, Buffalo Springfield, Rick Nelson, Dylan and The Beatles all recorded material that bore the stamp of country-fried influences, yet stopped short of total immersion.

Prior to embarking on their path toward the Sweetheart sessions, all was not well with the Byrds. The recording of their last LP The Notorious Byrd Brothers saw the departure of David Crosby and Michael Clarke. The album itself was one of their best efforts. The group, on the other hand, was effectively gutted. Needing to replace the departed in order to play live, their first act was to bring in Kevin Kelley on drums. The trio played some small gigs but it soon became evident that they would need a fourth musician to properly flesh out their sound on stage.

Though his tenure with the band was brief, Sweetheart of the Rodeo may not have happened if he had not come into their orbit. Whole books and articles have been devoted to this subject. In short, Parsons bonded with Hillman while kicking around some old country tunes together. Gram spelled out his plan to intertwine rock with country, something he had first attempted with the International Submarine Band record in 1967. Hillman was game. McGuinn took some convincing when the idea was initially floated to fully submit to the rustic charms of traditional roots music and head to Nashville to lay it all down. He acquiesced and they set to work, aided by session pros JayDee Maness on pedal steel, guitarist Clarence White, John Hartford (who handled banjo, fiddle, acoustic guitar) with Earl P. Ball and Barry Goldberg on piano. Clocking in at just over thirty minutes, the result was a model of concision, glorious harmony and impeccably rendered song craft. Curiously, this incarnation of the Byrds was also done by the time Sweetheart was released in late August. Commercial reception was chilly, though that is understandable considering the jarring 180 degree turn taken by the group. Rock journalism of the era was limited to paper based media. News related to the upcoming projects and plans of "your favorite artists" travelled far more slowly. Promotional ads were utilized by record labels, though in most cases, new releases appeared without months of aggressive marketing campaigns to precede them. The Byrds audience was not prepared for what they heard and were duly perplexed. Airplay was limited in terms of pop/rock radio. Country stations viewed the long-haired hippie boys' foray into their territory with suspicion and also opted not to take up the disc. The Outlaw movement was still in the future. Country music stars remained in their own camp with followers who didn't pay much attention to rock bands or the burgeoning counterculture. Delivering this magic record put them in the vanguard of a particular sound. They would have to wait patiently for the rest of the world to catch up.

Bookended by two Dylan compositions, “You Ain’t Goin’ Nowhere” kicks off the proceedings in grand style. McGuinn renders the unfathomable lyric beautifully, with smooth pedal steel lines supporting the verses. This was one of many tunes that Bob worked on with The Band in the basement of Big Pink. Roger altered a line that Dylan playfully corrected him on when he re-recorded the tune for release on his second greatest hits album in 1971.

"Pack up your money, put up your tent, McGuinn."

Chris Hillman gets nominated next for one of the best lead vocal tracks in the pack. "I Am a Pilgrim" is an old Christian spiritual that dates back to the late 19th century, though its authorship is unknown. Hillman has no trace of affectation in his delivery, bringing home the lyric beautifully with a very even, natural tone. All three singers do a very earnest and admirable job throughout of occupying the space without ever sliding into hokey parody. Both cuts are standouts and were duly issued as singles, though neither selection caught fire on the charts.

There is a subversive genius at work in the arrangements here. The "country-rock" tag is actually a simplification of what is really happening under the surface. "You Don't Miss Your Water" is soulful, R & B in the hands of its writer (William Bell) yet is reworked to synthesize rock drumming, the mellow back-porch strains of pedal steel and iron clad harmonies that veer toward pastoral settings rather than the Stax sound. Similarly, this approach is taken with "One Hundred Years From Now" and the closer "Nothing Was Delivered". On the other side of the spectrum, you have Parsons clearly channeling George Jones on "You're Still On My Mind" as the narrator soaks up booze in a local watering hole to fill the void of the departure of an ex lover. "Life in Prison" is cut from the same cloth, retaining the uptempo honky tonk shuffle with despondent lyrical subject matter. Antithetical to the aforementioned hybrid selections, they provide a listening experience that has variance in theme. Don't be fooled by labels, as you really do hear a subtle, sonic shift in gears as the album progresses. Ranging from the dirt-under-the-nails folk of "Pretty Boy Floyd" to the unabashed "livin for the Lord" overtones of a Louvin Brothers classic ("The Christian Life") you also get the aching beauty of Parsons' ode to his teenage home in Greenville, South Carolina ("Hickory Wind"). The experience is rewarding in every aspect.

"One Hundred Years From Now" is sublime.

Returning to where they begin this set, Dylan's inscrutable “Nothing Was Delivered” wraps up Sweetheart with a combination of elements that make this LP so brilliant. Production, playing and singing are all equally fine with an oblique summary in the refrain:

“Nothing is better, nothing is best / Take care of yourself, get plenty of rest.”

Critical estimations from the era in which it appeared were actually pretty positive. There were dissenting opinions about the new direction, though to their credit, the band did not overplay their hand with their fans in presentation. They do not appear on the cover in ten gallon hats, soberly posing in the garb of the wild west amongst tumbleweeds. Presentation is as subtle as the musical content. No references are made to the political and social turbulence of the late sixties, which has allowed the disc to age gracefully. Outside of and a step ahead of its time, Sweetheart of the Rodeo has lived up to its reputation as an incredibly brave and influential work.

The following year, Hillman and Parsons would team up to form The Flying Burrito Brothers, while McGuinn recruited a whole new cast of players to forge ahead under the Byrds name. The country rock banner would be taken up by subsequent groups to far greater acclaim, though the architects did eventually get their due acknowledgment as true innovators.

McGuinn, Hillman, Marty Stuart and a crack band of pros are currently in the midst of a tour to celebrate the 50th anniversary of Sweetheart. Playing the album in its entirety, along with a mix of other classics, the dates are selling out quickly and the reviews have been glowing. Here's a taste of what to expect from these legendary musicians and upcoming dates as of this writing.