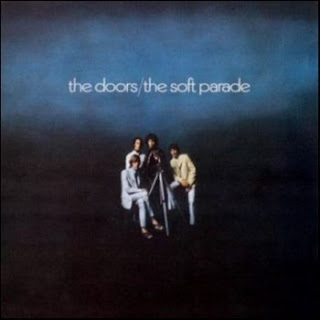 Produced over months of arduous sessions, the $100,000 wet dream that became The Soft Parade was universally panned when it first appeared in 1969. Don't believe for a second that this is simply The Doors buried in "101 strings", though. Jim Morrison would slip into the vocal mannerisms of Frank Sinatra (in places), adding a crooner's voice to their most adventurous music to date. Imagine these tunes drifting from the radio of a '63 Pontiac Laurentian. Don't feel too bad about passing over this disc, as you had probably heeded the warnings of those critics and fans who just didn't care for the contents.

This is actually a very solid record.

Please, please listen to me children

Morrison's contribution is slight on this outing. Waning interest in the group dynamic, Herculean consumption of alcohol and various film projects claimed more of his calendar time than did the business of writing songs. When he did engage, some memorable imagery emerged ("Wild Child", "The Soft Parade"). Robbie Krieger stepped up to fill the compositional gap, though his lyrics were more conventional. Listeners who had become accustomed to the inventive wordplay that had heretofore graced their LPs noticed the variance, contributing to the split personality that presents itself here. You can easily pick out the Krieger penned material as all are augmented by strings or brass. Densmore and Manzarek were intent on bringing jazzier touches to the table, encouraging the experiments with an expansion of their soundscape. "Tell All the People" is heralded by epic fanfare. Reportedly, Jim took issue with the "Can't you see me growing/Get your guns" line, refusing at first to sing it. Sounding nothing like what had come before, this smart opener must have been quite a shock to those who were conversant with the first three albums. They offer a stripped down version here, filmed for "PBS Critique".

The main engine of the band is never sublimated by the layers, with "Touch Me" being the most successful integration of the two worlds. Curtis Amy's Coltrane-dipped sax freakout is stunning, powered by the core instrumentalists pushing the intensity well to the limit. "Shaman's Blues" and "Wild Child" are classic Doors, while "Easy Ride" is fun and slightly reminiscent of Elvis' Sun period.

Not enough mention is made of the tasteful instrumental contributions made by Manzarek, Krieger and Densmore. They sounded like no one else of that time period, with no nods to British psychedelia or the West Coast bands that had a decidedly multi-colored vibe. Darker themes were often explored without hesitation, which would long keep their music in the purview of subsequent generations.

Stylistically diverse, this collection probably threw off listeners looking for some revelation or profundity that Morrison must have hidden within the grooves somewhere.

YOU CANNOT PETITION THE LORD WITH PRAYER!!!!

Though you can return to this thoroughly enjoyable set regularly. Clocking in at just over 30 minutes, it never wears out its welcome. Watch a live performance of the title song on PBS
Posted by Sean Coleman at 10:21 PM No comments: Links to this post

Seano over at Circle of Fits always turns out thought provoking, incredibly well written posts. This one is no exception. For all of you who have collected, worshipped and spun the black circle. Read and enjoy
Posted by Sean Coleman at 9:38 PM No comments: Links to this post