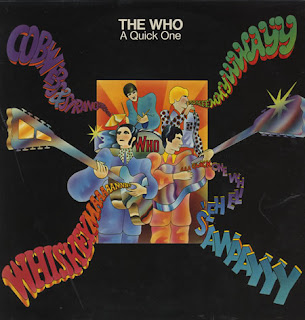 Image plays a significant role in putting a band across to the public. Like all good consumers, we hungrily devour a product when there is a brilliant marketing strategy behind it. The Who began as favorite sons of the Sheppard's Bush Mod scene. 1966 would see them emerge from that chrysalis as brightly colored purveyors of pop art. A cursory glance at the eye-catching cover of their second album would tell you as much. Inside the wrapper was a rather disparate collection which featured contributions from each member of the group.

Wasn't Pete supposed to be the main supplier of original material?

He certainly was, though a band that trashes its gear on a regular basis has a tendency to bleed cash. Performance fees disappeared quickly on repairs and replacement instruments.

Manager Kit Lambert, in an attempt to draw much needed funds, signed the quartet to a songwriting pact with Essex Music. The proviso? Receipt of 500 pounds per man was assured if each wrote two songs for the new LP. The deal really didn't make a great deal of sense, considering that Townshend seemed to be the only one with any real inclination (not to mention aptitude) for composing. Plus, they had just slogged through an internal battle over what artistic course to pursue.

These developments could have spelled disaster.

Fortuitously, the end result produced a solid second writer within the fold who turned out a veritable Who classic.

Keith and Roger managed only three songs between them, none of which would be mistaken for substantial works. Henceforth, Pete would handle the bulk of the songwriting duties, with Entwistle chipping in one or two per disc. 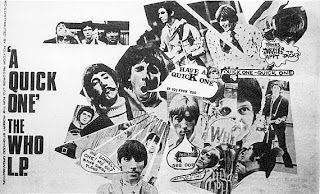 A Quick One has moments where it soars ("So Sad About Us", "Boris the Spider" "Run Run Run" and the title track) but the lesser cuts really drag down the proceedings. The inclusion of "Substitute", "I'm a Boy" and "Disguises" would have made this one of the top long players of 1966.

"Cobwebs and Strange" is a perfect example of a one note joke that was taken too far. Ripped directly from a track called "Eastern Journey" on Tony Crombie's 1960 soundtrack to the U.K. television series Man From Interpol, how Keith was able to claim authorship of the tune is questionable. The saving grace is Moon's vicious assault on the drums as the pace accelerates, punctuated only by his exuberant yelling.

Elsewhere, the power pop of "So Sad About Us" would serve to inspire a slew of cover versions, not to mention stylistic imitations. "Boris the Spider" was ground out under duress following Entwistle's bluff answer when asked if he had a second song ready to fill his quota for the album (and secure his publishing money). This inventive, chromatic romp up the fretboard was born out of a night out, getting pissed with fellow bassist Bill Wyman. Their discussion about why people were afraid of spiders triggered the lyric, which saw the hapless arachnid get squished in the end. The falsetto "creepy-crawlies" contrasted sharply with the "cookie monster" vocal treatment found in the chorus. It's a startling creation for that time and it would remain in their set list for years.

"A Quick One While he's Away" owed it's very existence to a suggestion from Kit Lambert that Townshend write a ten minute suite to flesh out the running time of the LP. Objecting at first, he then took up the challenge and created what Lambert termed as a mini-opera (or "Tommy's parents" as he joked in announcing the song at Leeds four years later). This first stab at the form was quite an ambitious piece of writing from a musical standpoint, but dealt with a fairly mundane lyrical theme.

The plot: A young lady pines for her boyfriend, who has been gone for nearly a year, crying over the distance that separates them. She takes comfort in the arms of Ivor the engine driver. Upon her lover's return, she confesses to her tryst with Ivor and all is forgiven.

OK, so the story is a bit short weight.

Musically, it showcases everyone to great effect. The six distinct themes allow plenty of room to stretch out for each instrumentalist and the close harmonies that open the proceedings are in evidence throughout each cycle. Everyone, save for Keith, plays a character in the framework of the narrative and they sharpened their live performance of this gem to a fine point. The most well-known footage is their legendary rip through this in December 1968 as part of the Rolling Stones' Rock and Roll Circus film, though the Monterey Pop version is more of a "warts and all" live example.

Impeccable playing majestically lifts even the slightest material found here, which makes things a bit more palpable. Despite the critical praise that gets heaped on this record, I really wouldn't go out of my way to recommend it to anyone that was curious about delving into The Who's work. There are far better starting points in their discography to choose from. Once again, the US release came months after it appeared in the UK. Re-titled Happy Jack for the North American market, it also included this song which was only available as a single in Britain in 1967.

Their next full length project would be a huge stride forward for the band, proving the idiom regarding the third time being the charm.
Posted by Sean Coleman at 10:22 PM 2 comments: Links to this post