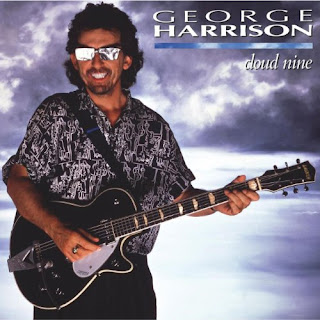 At that point in time, his last outing (Gone Troppo) had clocked in at roughly 30 minutes, contained a number of excellent songs ("Wake Up My Love", "Circles") was woefully under-promoted and failed to make a dent in the charts upon release in 1982. Harrison saw little value in chasing what was trendy or even trying to compete with the disposable pop that began to dominate the airwaves as the MTV craze snowballed. Spectacle now ruled in terms of music PR, twisting a barrage of images around the collective optic nerve of television audiences 24 hours a day. Understatement in song craft and musicianship now had very little traction with the masses.

George downed tools for a few years to spend time on other pursuits, though the urge to create pulled him back to his home studio in January of 1987 to start work on what would be termed as a "comeback" record.

Not that anyone was going to forget who he was

Having gathered a group of high profile friends to contribute to this project, the end product is tightly edited, well paced and the production (handled by George and Jeff Lynne) is pristine. Vocal harmonies and hooks abound, the quality of the material is top class. Among the best of the pack are "Fish On the Sand", "This Is Love" and the in-joke filled, "When We Was Fab". There is some fantastic six string interplay between Harrison and Eric Clapton on the title track. Listening to my vinyl copy (which I snapped up way back in November of '87) while scribbling these lines, it is impressive to hear the attention to detail that went into layering guitar parts. You also get the sense that George reigned in Lynne's tendencies toward throwing a ton of augmentation into the arrangements. Similarly, the pairing with Lynne helped Harrison simplify his approach toward song structure. The overall mix is superb, still sounding fresh nearly 30 years on.

The biggest surprise of the set was the inclusion of an obscure tune by Rudy Clark ("Got My Mind Set On You") which tore up the charts as a leader single and gave the album a massive boost from a commercial standpoint. Speaking of videos, this one and the clip that accompanied "When We Was Fab" both received heavy rotation on MTV, bringing his famous face into the purview of another generation who had missed him in his first incarnation as a pop star back in the sixties.

Ringo shows up to grace the skins here, as well.

Cloud Nine arguably paved the way for the Traveling Wilburys aggregation the following year, which itself was a massive, yet unexpected, hit.

Posted by Sean Coleman at 7:47 PM No comments: Links to this post