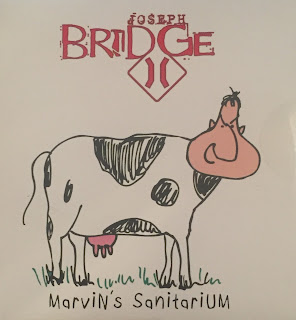 Joseph Bridge has unveiled a very clever, engaging song cycle featuring a cast of characters that are infused with invention, wit and warmth. Stunning in execution, the music supports flights of fantasy that incorporate luscious vocal harmonies, blistering solos and shifting time signatures. Clocking in at one hour Bridge manages to take some very complex paths, yet maintain accessibility in approach. Marvin's Sanitarium allows you to follow the central character (Marvin Penn) musically through 16 songs and a surreal 24 hours. Though he is physically confined, his mind is unfettered. There are multiple chambers to be explored here in the twilight, dawn and dusk...

"Brenda and the Breadheads" is an absolute stunner, serving up several head-spinning, stylistic shifts. Delicate guitar and bass interplay give way to staccato delivery in the verse that breaks out into an uplifting refrain.

It's morning time, in gingerbread land

Rays of sunlight make their way into every corner now, gently waking all and sundry. "Mr. Waterpump" uses the opportunity to get out and take a stroll, embracing the day enthusiastically. Acoustic guitar accompanies him, with otherworldly, layered vocals providing a subtle, psychedelic shiver to the proceedings on the chorus. Morning is filled with both promise and routine. Marvin watches "Phyllis the Parking Meter Lady" on her rounds from a tiny window in cell #85. She represents the workaday world and a semblance of order. Punchy guitar and drum figures push the track, while soaring vocals ice the cake. Decorative trumpet reinforces a clever hook.

The ice age from the sky is here this morning/could it be the first and final warning?

While furious drum rolls whip up a torrent of guitars, violins and mayhem, there is an exhortation to take a little time to get away, seek shelter underground from the returning fire in the sky. It is a powerful jolt away from the peaceful start to Marvin's day. Foreboding, this perfectly frames the next encounter. Inhabiting cell #118, the beady-eyed "Weaselman" is not to be trusted, yet leaves a perpetual mess in his wake. This weasel wonderland is one of illusion and his thin veneer of charm is expertly directed at those who are easy prey.

Sitting on a wooden spoon, in the afternoon

Our protagonist, now in an introspective mood, contemplates what has to be done ahead of the impending tidal wave of inner turbulence that threatens to inundate all. Preparation is necessary, with the only recourse to sanctify and thus purify "The Mind's Eye". This self talk then rolls into "Welcome to the Neighborhood" with the resident, friendly lunatic in the role of tour guide. Resigned to being the "welcome man" in this labyrinth, he decides to get on with it, albeit with one foot on the ground, the other in the clouds.

Here in cell # 61 we have Gregory Hawson. His crime? Setting fire to the bakery that he's been dismissed from. Best of all, the stories of all personalities that are woven into the lyrics actually come to life via musical narrative. Your imagination is all that's required as the wordplay is robust enough to paint a vivid picture. Similarly, "Ricky the Mouse" is befriended by Marvin, who at first comes in search of food and stays on to start a family in Marvin's room. Realizing their connection, the fact that they live together in harmony isn't lost on Marvin. Another delightful and resourceful member of this diverse crew, Ricky is welcomed rather than targeted as a pest. The tune is spectacular.

With the passing of the afternoon, shadows slowly begin to lengthen, intruding on the light-hearted moments. Dusk brings a slight chill as preparations are made for internal battle. Startling feedback heralds war inside against the outside, as a massed army of guitars dominates the sonic landscape of "Landmines". Tension builds as the message is delivered:

So off you go to find your land mines, deep and hidden

Drilling down into the fabric of your psyche, what will it take to illuminate these metaphorical land mines? Can these past shadows be deactivated for good?

WORLDS AWAY IN THE EVENING

This is the point in Marvin's day where he is lifted far beyond the boundaries of earthbound concerns. "Worlds Away" kicks this set into the sublime centre of consciousness itself. Highlights are plenty, though the monster lurking here in the "back nine" is the towering "Triangle Clouds", with fret-melting soloing that perfectly complements the melodic heaviness of the piece. Marvin's journey ends with his feet back on the ground, though that firmament consists of the cottony triangle clouds. The juxtaposition of light and shade are evident, though the need to balance both is Marvin's ultimate quest. Night is falling, bringing next a gentle musical landing pad in the haunting "Winter Blues", which rivals any musical statement made about those short, gloomy days where the simple joys in life are scarce. Curiously, there is an equation of seasonal change as the light fades on his day.

Marvin says the things that he had to say/Could it be that he only has just one more day to find a way?

Or is this "Goodbye"?

Teasing potential outcomes to Marvin's day, it is ultimately left up to the listener to decide what happens next. (Is he closing the door behind him on the sanitarium? Bidding farewell to internal conflict?) Out of all of the melodic, top class work to be found on Marvin's Sanitarium, "Goodbye" stands tall. Dynamic and crackling with electricity, it is a powerful punctuation mark to a head-spinning day. Ending with the exquisitely orchestrated instrumental, "Ireland's Dream", Marvin ends his day and finds rest in deep sleep as a contented feline. Strings are soothing and uneasy all at once, with a nervous tempo that is broken up by tiptoeing guitar figures. There is now time to contemplate where you have been inside of the sanitarium, without words to distract. The question remains: Was all of this real? There is no better way to find out than to go back to the top. With each spin, further nuances will be uncovered.

Simply put, this is a must hear.

Purchase it now and find out more about Joseph Bridge right here
Posted by Sean Coleman at 1:14 AM No comments: Links to this post