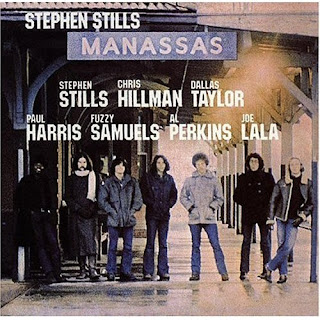 Manassas ranks as one of the nicest bonuses that came out of the CSNY implosion in the early seventies. Stephen Stills assembled a first-rate cast of musicians for this project and they gelled extremely well. No less a light than Chris Hillman was up front with Stills, providing stellar harmonies, second guitar and he was indispensible when it came to lending his blazing mandolin chops to the bluegrass tracks.

Clocking in at 70 minutes and change, your attention is required. If you are not an ADD riddled sort, then your patience will be rewarded. Stills succeeds in presenting an eclectic mix of genres under the banner of cleverly produced ‘roots rock’. His strength as an arranger is frequently highlighted and the material is decent. Stylistically, Manassas doesn’t fly off in as many directions as The White Album, though there’s enough diversity to keep things interesting.

Why then does this disc find itself in the realm of forgotten music?

For starters, there was no huge hit single to be found here ("It Doesn't Matter" should have been). The songs did not possess the big hooks that reel in casual music fans, either. This is not to say that they don't captivate the ear, it's just that the melodies are crafted to sneak up on you. Smart music often needs time to grow and take root in your brain through careful listening sessions. Another strike against this release was the record company's indifference. Atlantic had a vested interest in Crosby, Stills and Nash as they raked in staggering amounts of cash for the company. Manassas was relegated to side project status, which lowered their profile, slackening any effort put into the promotion machine.

Embarking on an extensive tour that took them around the world, the group name (and album cover) was settled while on an early stop in Virginia. Rock, bluegrass, folk, country, blues and Latin jams sound effortless in the hands of this extremely versatile crew. Highlights? "It Doesn't Matter", "The Treasure", "Johnny's Garden", "Cuban Bluegrass" and "Fallen Eagle".

Bill Wyman co-wrote "The Love Gangster" and played bass on the track. Manassas is the band he reportedly said that he would have quit the Stones to join. High praise indeed.

Generally available on CD as an import, though the record can be found fairly easily, "Manassas" is the summit of Mount Everest in the Stills catalog and may be the most fully realized example of this gifted man's talents.
Posted by Sean Coleman at 11:05 PM 2 comments:

Very sad to hear of the passing of Dan Peek, singer/multi-instrumentalist/writer with the band America from 1970 until his departure in 1977. He wrote a number of hits for the group and continued to make music as a solo performer. Here he is, performing one of his many great tunes, "Lonely People". Peek was just 60 years old. 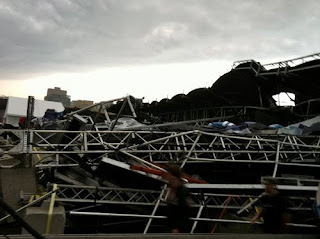 Bluesfest has been a premier summer music event in Ottawa since the mid nineties. This year, the lineup was quite amazing, though I did not make it to any of the shows.

By chance, a good friend of mine asked if I would be interested in checking out Cheap Trick, who were one of several acts closing the festival this year. I have not seen these guys live since the late 80's ("The Flame" was a surprise return to the charts for them at that time).

We had a couple of beer and were kindly given a lift down to the site. Arriving just before the band hit the main stage, we lined up for more beverages and found a spot just as the pre-recorded intro finished. They came out strong with "Hello There" and carried on with an unexpected "Tonight It's You".

So far so good.

About 15 minutes in, an ominous, dark shadow began to creep up behind the audience. People began to point skyward and take pictures of the advancing dark clouds.

Something wicked this way comes

Sensing a heavy downpour was imminent, many of the assembled now began to turn away from the stage, pack up and leave. My buddy told me to turn around and look at the trees in the background. The wind was bending them almost to the ground. Then the mains went dead, though the band still had a monitor mix. A flock of birds was blown out of their planned flight path, toward the stage as 120 kmph winds roared past. Cheap Trick downed tools, fled the stage and thirty seconds later, disaster struck.

The stage was lifted and toppled backward in a completely chaotic and surreal scene. We were stunned, though all of us agreed to calmly find a safe spot as hail, rain and debris pelted the crowd. It is astounding that no one was killed.

I have been to hundreds of shows. This is by far the strangest and most unsettling concert experience that I have ever had. We trooped away from the site as emergency vehicles screamed toward the scene. Hitting a pub after a trek in the rain, pints were hastily ordered and consumed as we tried to make sense of the weather bomb. Not quite the evening that any of us expected, though it will be memorable for all of the wrong reasons.
Posted by Sean Coleman at 10:54 PM No comments:

Western Ninja has a mid-tempo, very catchy single called "Alone In the Crowd", available now. You can check it out and download the song right here 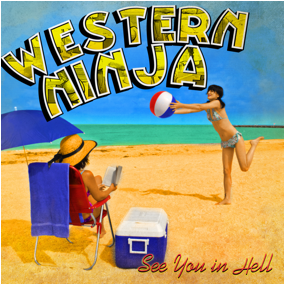 Posted by Sean Coleman at 9:38 PM No comments: 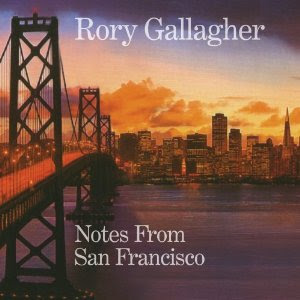 One of the great mysteries in life is how one person can be blessed with copious amounts of talent and not be a superstar, while those who are comparatively lightweight in this respect become world famous. Such is the case with the late Rory Gallagher. His career trajectory aligned with rise to prominence of some of the greatest guitarists of the sixties (Hendrix, Clapton, Page and Beck) so it’s understandable that he may have been somewhat overshadowed in such company.

Musicians have long been singing his praises. He maintained a very devoted fan base who snapped up his recordings and went out of their way to see him shred in person. To the delight of his followers, a long buried treasure has been unearthed and made available recently. These fabled sessions began in 1977, with Rory set to record with producer Elliot Mazer. At the end of a year-long world tour, and without so much as a couple of days off in between, Gallagher and his solo band arrived at Mazer’s studio in San Francisco to begin work on the album which he hoped would capture some of the American musical spirit that he so admired.

Departing from his usual approach, Gallagher conceded to augmenting the core instruments with what would be, for him, surfeit layers of sound. He voiced his dissatisfaction with certain elements of the mix. His brother, Donal, takes it up from here:

“Rory wasn’t really happy with where the album was going. After Christmas, Rory and I returned to San Francisco to do another set of mixes. But remix after remix, there was something radically wrong, in Rory’s view. He just wasn’t happy. So by mid-January 1978, he decided he wasn’t going to go through with it.”

Mazer, no stranger to completing recording projects that would ultimately be shelved (Neil Young’s “Homegrown” LP) watched another one slip by.

Upon his decision that the disc would not be issued, Rory then broke up his band of five years and quickly turned his attention toward a new project. In 1992, he implied that this work would only see the light of day only if all of the tracks could be remixed.

Fast forward to 2011 and the release of “Notes From San Francisco”, which not only gives fans of the late guitar genius the “lost” album but also includes a second, live CD taken from four gigs in 1979 at San Francisco’s The Old Waldorf.

Far from being a collection of outtakes that have been rushed to the marketplace for a quick buck, this is a solid, cohesive set. All that was needed was a fresh set of ears to listen and undertake new mixes of the completed material. Gentle surprises come in the form of "Wheels Within Wheels", an acoustic based piece with very tasteful electric overlays and "Fuel to the Fire" which boasts a stunning solo. Elsewhere, he swings wildly with big overdubs that hit hard ("B Girl"), stinging boogie riffs ("Çruise On Out") and what amounts to a tougher edged Stones vibe (circa Exile on Main Street) complete with horns ("Rue the Day"). All are on target, while showcasing the nimble playing of his band.

As for the bonus live disc, expect no less than a masterclass in guitar technique, with devastatingly tight performances being the rule and not the exception.

This is one of the most satisfying "from the vault" releases that I have heard in a long time. If you are a fan of his work, this will not disappoint. Notes From San Francisco is also sure to attract new and willing converts to his existing army of admirers.

Posted by Sean Coleman at 10:31 PM No comments: