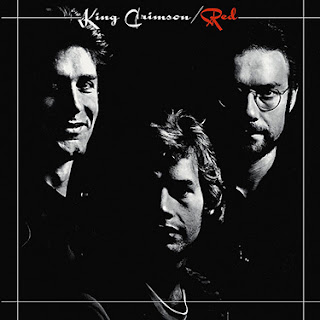 Opening with the powerful instrumental title track, the trio clearly relish the opportunity to play games with time signatures in support of Fripp's ambitious lines. Dark synth sweeps creep in toward the three minute mark, interpolating with the ever inventive guitar work as the rhythm section disappears. Much like an ominous, passing cloud burst, this gives way for the full band to take up the theme all the way to its glorious finish.

Wetton's vocals hit the spot on all three tracks that showcase them, while Bruford brings his usual percussive brilliance to the proceedings. His anticipation for playing the spaces in between the notes and tasteful approach remind the listener that he's top class when opportunities to dazzle present themselves.

"One More Red Nightmare" flies in guitar parts from another dimension.

Ghostly mellotron (courtesy of Fripp) announces the multi-layered "Starless", which is quite engaging for its length. Free form, jazzy sections mingle with dreamier interludes in an extremely successful marriage. Nary a note is left unexplored as all players go for improvisational gold.

Armchair rock critic Kurt Cobain thought this disc to be one of the finest of all time. Tough to argue as your brain takes in clever arrangements, packed with an array of sonic surprises around every corner. Strings and wind instruments are deployed in a manner that bring an air of majesty to the table, yet they do not overwhelm what the core instrumentalists are laying down. Check your pulse if you are not properly inspired out of your skull after spinning this esoteric masterpiece.

Red is the soundtrack of the future...even today.

Fripp walked away from King Crimson before the release of Red in the fall of 1974 and no supporting tour was undertaken. Outside of a live disc (USA) that was issued in 1975, there was no further band activity until 1981.

Posted by Sean Coleman at 9:51 PM 3 comments: Links to this post