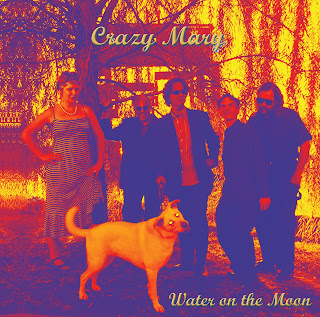 WATER ON THE MOON

"Got to be starting something, everything has got to change"

Opening their latest disc with a call to arms, New York's Crazy Mary convey a positive message in "Eyes Above the Clouds" exhorting listeners to "use the weapon of love". Freewheeling in their approach, each track is infused with stellar playing and a particularly soulful feel that nods in the direction of the late sixties. There is a great sense that these people really enjoy making music together, which bodes well for finding a loyal audience, as that natural ebullience is something which cannot be faked. People know when it's real and get swept up in the energy.

"Gravity" is my personal pick of the pack, with clever shifts in time signature and nice harmonies all wrapped in an ethereal chord sequence.

Reminiscent of the experimental side of the Jefferson Airplane, Crazy Mary at times takes chances in arrangement and form. While their songwriting heads are in the clouds, they do keep their feet on the ground with solid grooves.

Much to be commended here, though I am surprised that I have not heard of them until now. They have been turning out albums for the past decade and I have some catching up to do.

Music of this caliber should be finding a place on the play-lists of contemporary rock stations. We should demand more of that medium. In the meantime, independent ideas still thrive on the net. Time for a change?

Here's one to enjoy from the Crazy Mary archives (2001). Water on the Moon is available now and comes highly recommended. 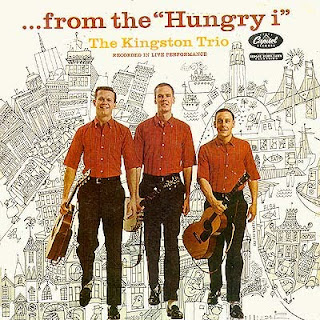 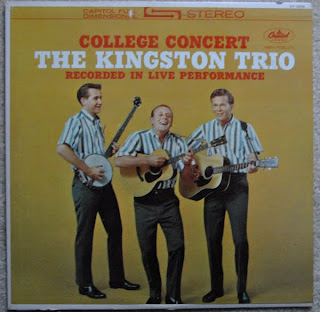 FROM THE HUNGRY i and THE COLLEGE CONCERT

Over fifty years have passed since the The Kingston Trio's close harmonies first made an impact on record buyers. Sporting haircuts that you could set your watch by, with vocal arrangements as sharp as their matching shirts, these guys were also excellent musicians. Their success was a product of possessing a fine ear for arranging traditional tunes coupled with raw talent. Commercially, folk music hit a rare peak in the early 60s due to the pioneering work of Dave Guard, Bob Shane and Nick Reynolds.

Criticized by purists at the time for taking more of a populist approach to the music that they turned out, hindsight reveals more versatility than audience pandering in their material.

From the Hungry i was the second release by the group in 1959 and was excerpted from two nights of recordings made during their month long engagement at this venerable San Francisco venue. "Tic Tic Tic" is my personal favorite. Tight playing and singing is the rule, rather than the exception with nary a note out of place.

Despite their appeal, they were often dogged by a dark, disingenuous cloud for claiming traditional songs that had fallen into the category of public domain as their own. It's one thing to co-opt dusty old melodies from another century (and many artists did so), though when they attempted to take credit for Pete Seeger's (co-written by Joe Hickerson) poignant "Where Have All the Flowers Gone?", he politely asked that they drop any pretense of authorship.

For all that, their rendition is nothing short of perfect. Featured on The College Concert, it is one of many highlights on their first live disc with John Stewart who had replaced founding member Dave Guard in 1961. Guard's departure was apparently not amicable.

Nostalgia has been the primary driver for having these discs in rotation for the past few weeks. My parents had both of these LPs and I used to listen to them quite a bit as a child. (The cartoon depiction of the streets of San Francisco on the Hungry i album cover seemed like a page out of a coloring book to a four year old and I used it accordingly.)

Both sets hold up quite well.

The lads began to fall out of favor in the mid-sixties as more serious social concerns called for stronger language. People who chose to get their folk on now turned to singer/songwriters whose work reflected the turbulence of the times. British invasion bands helped swing the pendulum back toward rock.

Inevitably, they would call it a day in 1967, though the act has been revived with different line-ups in the intervening years.

I have made a few alterations to this write up in light of some great information passed on by writer Jim Moran via the comment section. His blog http://compvid101.blogspot.com/ is a treasure trove of insightful pieces on folk music . Currently, there is an excellent post on Bob Shane which is a must read for fans of the Kingston Trio.
Posted by Sean Coleman at 12:23 AM 6 comments: Links to this post 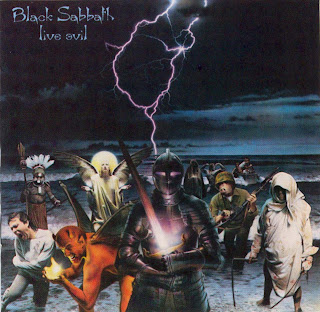 Why can't we all just get along?

Balancing ego and accomplishment within the structure of a band is a tricky proposition. While some are content to play their role without demanding a greater slice of creative control or additional time in the limelight, many groups have fallen apart due to needless power struggles within their ranks. Fights about whose songs should be included, the overall musical direction to follow, image and a host of other contentious points have toppled many acts before they have had a chance to fulfill their initial promise.

Please allow Tony Iommi to break it all down for you.

We'd worked so much and we'd been everywhere, non-stop work for years and then we recorded the live album and I say that loosely because of instead of being involved with it and listening to the sound in the [mobile recording] truck, it was recorded that quick at these gigs and we were more concerned with the gig than getting involved in the recording side.

When we got the [live recordings] in the studio, they were just bloody awful. It was so badly recorded that we had a big problem with it. We were pretty tired and our nerves were on edge and it just led to a bad feeling in the band.

And we said, "You're kidding?" and we broke up because of that! And of course, it was all hearsay and I don't really believe [what the engineer said] now but we did at the time.


Dio walked, taking Appice with him to forge a solo career.

Everything had been going so well...

Live Evil hit the racks not long after this bitterly acrimonious period of mixing, remixing, disowning and quitting took place. Quite good it is, too.

Courtesy of Circus Magazine, I recall reading a review of one of the gigs on the Mob Rules tour (Pine Knob amphitheater in Michigan) at that time, with mention of a forthcoming official live recording. This was the first Sabbath record that I was able to purchase when it originally came out. There were many debates revolving around Dio's handling of the Ozzy-era material, especially as Osbourne had released Speak of the Devil (a double live album of old Sabbath tunes) at roughly the same time. In the summer of 1983, I listened to both incessantly.

There are plenty of highlights, including the marathon version of "Heaven and Hell" welded together with "The Sign of the Southern Cross", complete with Ronnie's stage banter about recording/filming the show for eventual release and the audience participation segment. "Voodoo" has an extra verse, Iommi shreds, while Geezer and Vinny fill the spaces with beautiful noise.

If it's too loud, you're too old

It's worth mentioning that, for audiophiles, Live Evil exists in several formats, all with differences that range from track sequence (cassette has different running order than the vinyl copy), mix (CD vs. the record, UK vs. US masters) with the strangest being a CD release from Castle in 1996 that boiled everything down to one disc and eliminated Dio's between-song chatter. The Deluxe Edition, on the market since April 2010, has righted this careless tampering.

Regardless of which copy you may own, it is a sterling document of this incarnation of Sabbath.

Posted by Sean Coleman at 10:34 PM No comments: Links to this post 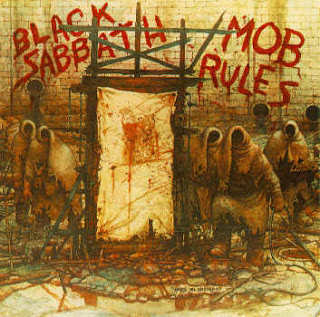 Bolstered by the warm reception that Heaven and Hell received from critics and fans, Sabbath now returned strongly to the commercial arena. Always popular as a live act, their record sales had dwindled sharply from the mid 70s. Those fortunes now reversed, they carried on with an extensive tour to support Heaven and Hell. Plagued by a number of personal issues, Bill Ward abruptly quit the band before a show in the middle of the tour.

Younger brother of Vanilla Fudge drummer Carmine Appice, he brought a different approach, technique and attack to the Sabs. At the time, Tony admitted that Appice's playing gave himself and Geezer "a kick up the arse" on stage, sharpening their focus with live arrangements of both the new and "classic" material.

These changes amounted to a total overhaul in the sound and personality of the group, though it was an "apples and oranges" comparison when matched against the original line-up. Both incarnations produced work of great merit, equally enjoyable on many levels.

Striking while the proverbial iron was hot, the Anglo-American Sabbath went into the studio to record the tracks that would comprise Mob Rules. Once again, Martin Birch handled production duties and the results were impressive. A decade would pass before these four musicians collaborated on another studio recording, though we're jumping ahead a bit.

Much heavier than the last set, Mob Rules kicks off with Vinny Appice applying a balpine hammer to open hi-hats, announcing the arrival of "Turn Up The Night". Setting the tone for a very compelling "side one", it has a great turnaround in the bridge with a frenetic build-up to the guitar solo. Iommi's sound is much brighter in the mix, which Birch ensures is balanced with much more "top end" than usual for Sabbath. Dio's themes deal with madness, violence and black magic blending with his standard recipe for conjuring tales out of the mist. He particularly scores on both the epic "The Sign of the Southern Cross" and the fleet-footed "Falling Off the Edge of the World", which has an inspired guitar figure with tortuous, demanding intervals.

Throw in the pulverizing title track, an incredibly fast exercise in distorted mayhem that reinforced their position as dealers of the weightiest slabs of metal in the business, and the picture is complete. Even somewhat lesser tracks ("Slipping Away", "Over and Over") still have an energy in performance that keep them afloat and give the impression that they are worthy of placement amongst the other giants on the disc.

Interesting to note that the song sequence is quite similar to Heaven and Hell, which suggests that perhaps a bit of branding was afoot. It would have been interesting to see what musical course this aggregation charted next. Following the tour in support of Mob Rules, things went downhill pretty fast, leading to another major shakeup in the Sabbath camp.

Posted by Sean Coleman at 10:48 AM 2 comments: Links to this post