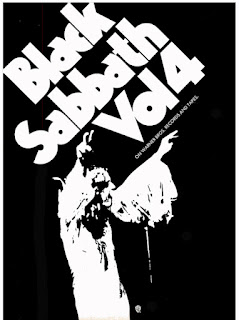 Black Sabbath Vol. 4 was released on this date, forty years ago.

The disc itself is a great listen and has long been a personal favorite of mine. Not sure how much I had to drink when I originally wrote this review but you can read it here.

Worthy of mention: I have a Korean vinyl copy of Vol. 4 that sports a blue monochrome cover photo of Ozzy, instead of the familiar orange. No gatefold either.

I'm sure that everyone who reads this useless bit of trivia will sleep fitfully tonight.

Except for insomniacs and people who harbor extreme feelings of guilt about disturbing acts from their past.

Posted by Sean Coleman at 5:34 PM No comments: Links to this post 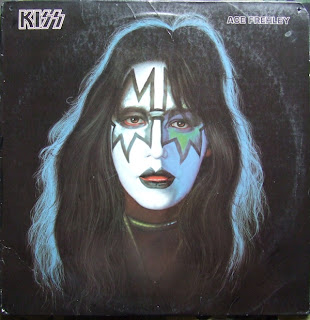 Meet Paul "Ace" Frehley, rock guitarist and former cosmopolitan raver. Back in the early 1970s, he and three friends had testified against some pretty high level bosses of the Cosa Nostra. To guarantee their safety, they were drafted into a music group that would sell truckloads of records and become world famous.

This sounds preposterous! How would such a plan involve anonymity?

I knew that you would ask.

The catch is that their faces would be covered in full makeup at all times, thus preventing them from being discovered. Real names would never be used. It was the perfect plan with no one ever suspecting that these iconic characters were part of the witness protection program.

They just needed a name.

KEEP IDENTITIES SUPER SECRET was a tad too long for most marquees, so they settled on KISS...

From their debut in 1974, KISS played straight ahead rock and roll, with no pretension involved. Combining larger than life stage personas with instant anthems made the kids go crazy and the KISS Army grew steadily. Becoming a brand as much as a band, they were a marketer's dream. 1978 would be the year of apotheosis for our grease-painted heroes. Two double albums (Alive II and Double Platinum) were issued in addition to four solo discs. Eight slabs of vinyl in one twelve month span!

Market duly flooded, this bit of KISStory brings us to the matter at hand.

Ace Frehley had written a select few songs that found a home on their releases up to that point. Gene and Paul dominated the writing and along with Peter Criss, handled the majority of lead vocal duties.

So how would the Spaceman fare in the solo sweepstakes?

His offering outsold the other three by a wide margin.

Whether or not you are a fan of KISS shouldn't really enter the equation here, as this is an extremely strong set of tunes. Frehley tastefully handles just about every instrument, with the exception of drums. Dave Letterman's own Anton Fig admirably took care of that role, joined by bassist Will Lee on three tracks. The lyrics generally amount to tales of drinking ("Wiped Out"), driving at top speed ("Speeding Back to My Baby"), snorting coke ("Snowblind") and more drinking/drugging ("Ozone"). You need only read his biography No Regrets to confirm that he was merely chronicling his own wild, extracurricular activities during this period.

The words themselves are not the selling feature as they just capture highlights of the never-ending party. What is most impressive are the melodies and meticulous arrangements. This is a timeless motherfucker of a rock album, with a narcotic thrill injected into every note that metastasized during the process of its creation. Frehley wisely played to his strengths, deploying harmonized riffs against shimmering acoustic guitars, shifting time signatures, fret-slashing solos and very catchy hooks.

Surprisingly, he even cracked the top twenty singles chart when his cover of Russ Ballard's "Back in the New York Groove" got "forty-fived", attracting much radio play.

Considering the importance of the occasion, Ace stepped up to the mic with a degree of confidence. Personally, I would compare his distinctive singing style to that of Joe Walsh. Within the boundaries of the Eagles, Walsh would consistently upend the over serious Henley and Frey when handed a lead vocal. When Ace was given a spot to sing, his personality came across in identical fashion. Both enjoyed the excesses that rock stardom dumped on their respective lawns, liked a good laugh and kept a virtual "wink and a gun" present in their voices.

Can't beat a sense of humor, nor can you argue with a sick mind...

Bowing out with an instrumental, Frehley gives you a few minutes to contemplate the quality of the previous eight selections before deciding to listen again. Given the fact that everything is tightly edited with no filler, it's a safe bet that you will. Frehley had likely been sitting on some of these tracks for a bit. It is to his credit that he was able to properly document the party in progress without falling into the trap of overproduction and special musical guests. He would sporadically release some decent material after his departure from KISS, though nothing as solid as this. 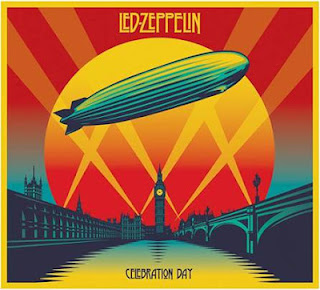 As you may have heard, Led Zeppelin has been posting on their Facebook and Twitter accounts about a huge announcement coming today.

On December 10, 2007, Led Zeppelin took the stage at London ’s O2 Arena to headline a tribute concert for dear friend and Atlantic Records founder Ahmet Ertegun. What followed was a two-hour-plus tour de force of the band’s signature blues-infused rock ’n’ roll that instantly became part of the legend of Led Zeppelin. Founding members John Paul Jones, Jimmy Page and Robert Plant were joined by Jason Bonham, the son of their late drummer John Bonham, to perform 16 songs from their celebrated catalog including landmark tracks “Whole Lotta Love,” “Rock And Roll,” “ Kashmir ,” and “Stairway To Heaven.”

The film of Celebration Day will see a worldwide theatrical release by Omniverse Vision on 1,500 screens in over 40 territories on October 17. The theatrical screenings will follow premieres in London , Los Angeles , New York , and other major cities. Tickets for the public screenings will be available on September 13 via ledzeppelin.com.

Celebration Day will then be available in multiple video and audio formats on November 19 (just in time for Santa) from Swan Song/Atlantic Records. Specific product details will be announced soon.

7. Nobody’s Fault But Mine

9. Since I’ve Been Loving You

12. The Song Remains The Same


Posted by Sean Coleman at 1:39 PM 2 comments: Links to this post 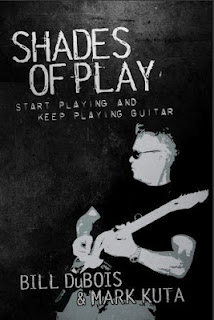 Taking up the guitar requires commitment and a passion for the instrument. Shades of Play is a fantastic new e-book that is perfect for beginners. It will also inspire those who already have a few chords down to build upon their existing skill set.

The Joy of Discovery

Bill Dubois and Mark Kuta have designed a smart, easy guide to the rudiments of the six string that combines instruction with insight and humor. The authors are naturally empathetic to the novice player, sharing their own motivational tips and tricks to keep the process of learning fresh. I had the great pleasure of contributing the foreward to this fine project. After years of playing, there's still so much to know and immense satisfaction when your technique improves.

Shades of Play is available now as a download through itunes and can also be purchased at Amazon.com

You can also check out the Shades of Play Facebook page.

Keep your fingers moving!
Posted by Sean Coleman at 9:53 PM No comments: Links to this post 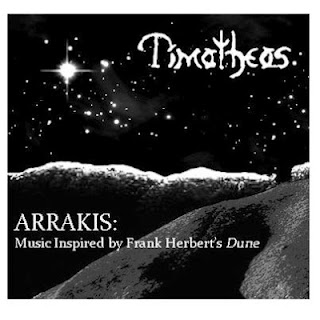 Arrakis is the latest release from Timotheos, comprised of fourteen ambient music tracks inspired by Frank Herbert's 1965 sci-fi novel, Dune. Arrakis is the desert planet which is home to the spice "melange". the most valuable substance in the universe.


Timotheos sets you up with a sonic companion piece to the rich fantasy world that Herbert so expertly created. There is much invention in these soundscapes, so take care to enjoy the textures. Combining austere, slow burning creations with busy synthetic outings, there is also heavier fare as the sudden guitar attack/feedback of "A Fold In Space" bears out. Feel free to revisit the book with this music as your guide.


Posted by Sean Coleman at 6:49 PM No comments: Links to this post