As a postscript to my review of last week's Van Halen show here in Ottawa, I wanted to share the work of a very talented photographer, Mark H, who has graciously sent along a link to a gallery of fantastic shots that he captured during the concert.

Eh! List Images provides Canadian media outlets and artist publicists, management and PR firms with immediate on-line access to photo coverage of music, concert and entertainment events. You can find out more and check out the Van Halen pics here
Posted by Sean Coleman at 10:58 PM No comments: Links to this post 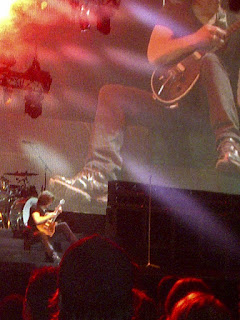 Last time that Van Halen and I were in the same building was the Toronto stop on their 2004 tour. The night before, Chris, Tweed, Red, Jim and Sean sat in a circle around a table with guitars, emptied way too many beer bottles and played tunes far into the wee hours. The next day my head was like a football, I thought that I was going to die. Tell me, me-o-me-o-my, wasn't that a party?

The pre-concert debauchery was far more memorable than the event itself. The sound was dodgy, Eddie was off of his game and Sammy Hagar, while a pro, couldn't save the gig from being merely average.

Flash forward to March 21, 2012. No booze (for myself, Red, Doug or Eddie), Uncle "Diamond" Dave was at the mic and the mighty Van Halen stormed through one of the best live shows that I have seen in quite some time.

Kool and the Gang opened up and they put the assembled crowd in a good mood with a mix of their 70s and 80s hits. Musically, they were tight, acquitting themselves very well in every respect. Showmanship, spot on vocal harmonies, razor sharp horn section...it was clear that this was a group that (for the original members at least) paid their dues with 40 plus years of gigging. No fake vocals/pre-recorded tracks.

Closing with "Celebration", they had a predominantly "rock" crowd on their feet and cheering.

Following the stage turnover, which took some time, Van Halen stepped out in a hail of drum-fire, guitar and bass pyrotechnics, stopped dead and EVH tore into the unmistakable riff that kicks off "Unchained".

David Lee Roth then strutted to his position in the spotlight, wearing a broad smile that only widened as the crowd welcomed him with a roar that could have drowned out a passing 747.

With that began a two hour extravaganza that was louder than God.

My buddies were in the 6th row on the floor and I was seated just a few rows back from them. It was the perfect vantage point to take in all of the action. That being said, footage/pictures were captured. Header photo provided by Red Curtis. Here's "Panama" courtesy of Doug Cameron.

Dave's comment about his "union contract" was priceless. Seeing him take command of the stage was a bit of all right. He has made adjustments to how he delivers his vocals, due to age and the disappearance of his higher register, but if I could do a goddamn scissor kick at 60 then I would surely tell my critics exactly where they could shove their comments about my voice. Speaking of singing, that's where father and son spent the majority of their time during the show. Wolfie and Ed had a great vocal blend and there were some nice three-part harmonies happening. Michael Anthony's voice was missed, though Wolfgang was pretty damn stellar on the four string. He played some great lines throughout the show and has certainly earned his place alongside Uncle Alex and Papa Ed.

Alex Van Halen is a force of nature. Grinning behind ever-present shades and semi-stripped down Ludwig kit, the man was a virtual atomic clock. His solo was brief (but good) and he solidly flew through the evening, playing with the energy of someone half his age.

Brother Edward was no less impressive. Given the string of adversity that has befallen him since the late 90s, it was great to see him melodically shred through both the classics and the new songs, which held their own in the set. Smiling as he peeled off astounding solos and stunningly precise salvos that bit down hard into the collective ears of the crowd, EVH had new tricks up his sleeve that only served to solidify his genius as a musician.

Have to admit that there was nearly a tear during his solo, especially as he wound through "Cathedral". Jaw-dropping excellence...

Pound for pound, there was not one bit of wasted space in the entire show. While I missed "Mean Street" and "Outta Love Again", it was amazing to experience "Girl Gone Bad" up close and personal. Even the little mistakes were fun as hell to watch (Wolf and Dave harmonizing but singing two completely different lines of "Pretty Woman" at the same time, Alex falling out of time with the synths in "Jump" and steering the band right back in time like a pro).

Here's a tip for all of you fakers out there who mime to backing tapes: QUIT and stop cheating people out of hard-earned ticket money. Conversely, here's a word for those who pay to see such fake shows: Don't support that shit.

By the time of the encores, the entire building was euphoric and confetti rained over the stage as "Jump" brought things to a close. Rip Taylor would have been proud.

Highlights? The whole thing! Their backline wall of amps blew my head off, though I would gladly see them again on this tour if I had the chance. Rockers with walkers? No way. Brilliant band who remain impressive in 2012.

Unchained
Running With the Devil
She’s the Woman
Romeo’s Delight
Tattoo
Everybody Wants Some
Somebody Get Me a Doctor
Chinatown
Hear About it Later
Oh, Pretty Woman
You Really Got Me
The Trouble With Never
Dance the Night Away
I’ll Wait
Hot for Teacher
Women in Love
Girl Gone Bad
Beautiful Girls
Ice Cream Man
Panama
Ain’t Talkin’ About Love
Jump 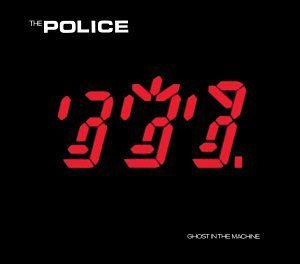 Way back in the mists of childhood, I received an LED (light emitting diode) watch as a Christmas gift. Futuristic mid-70's technology, only minutes ahead of its time. 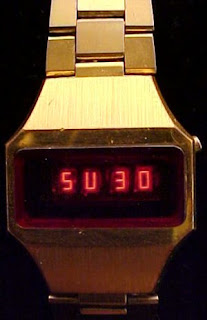 When the watch battery was dying and the magic button on the side was pressed to display the time, this LP cover appeared instead. A full five years before it was utilized by a distinguished, English power trio.

The fourth release by the law enforcers began the process of unraveling their established sound. Copeland's foundation work is solid, though Andy changed his guitar tone to embark on some interesting tangents. Keyboards now figured more prominently in a denser mix.

Sting picks up the sax.

Critical raves have accompanied the very mention of this record, yet only five truly worthy songs stand out.

"Spirits in the Material World" has a bassline that defies gravity. Randy Jackson, a fine bassist in his own right, raved about Sting's idiosyncratic figures to author Daniel Levitin in "This is Your Brain on Music". Rightly so! Mr. Sumner outdoes himself with both the tune and his top class instrumental performance. Similarly, "Every Little Thing She Does is Magic" is so good that it could not be improved upon. The tension that builds in the verse is swept away by joyous abandon in the infectious chorus. High energy playing from all involved makes this work that any pop writer would happily add to the "wish I had penned that one" file.

Things quickly change from upbeat to turgid as the opening strains of "Invisible Sun" come into focus. The count in carries the suggestion of a slowly swinging watch on a chain, lulling the listener into deep sleep. This somnambulistic state can be maintained until Andy's excellent "Omegaman" jolts you awake with a killer riff and explosive dynamics. It would have been a single too, but Sting vetoed it. "Secret Journey" and Stewart's brooding "Darkness" (with madly panned high hat work) bring things to a close.

These gems rank with the best of anything they recorded during their short tenure as a trio.

At risk of being beaten about the head with one of Sting's yoga mats, naive political statements ("Rehumanize Yourself", "One World") mixed with flat out repetitive tunes drag down the rest of the album. Could you honestly spend an hour in a locked room listening only to "Demolition Man"? Six minutes is pushing it. While the grooves are in place, the lack of hooks, coupled with smothering horns add unnecessary weight to the other compositions.

About that album title...

British philosopher Gilbert Ryle used ghost in the machine as a derogatory description for René Descartes' mind-body dualism. Descartes himself had been a ghost for about 300 years at this point (1949), so I really don't think that he cared. Arthur Koestler's 1967 book, which uses Ryle's phrase as its title is cited as Sting's inspiration for the project. The main focus is mankind's movement towards self-destruction.

Speaking of which, you can splice the first two selections with the last three on this disc, remove the filler tracks and take them on a long drive out to the middle of nowhere for disposal. They simply lack the spark that the others have in abundance. The next project would be their last, though it is far more rewarding in all aspects.
Posted by Sean Coleman at 3:51 PM 2 comments: Links to this post 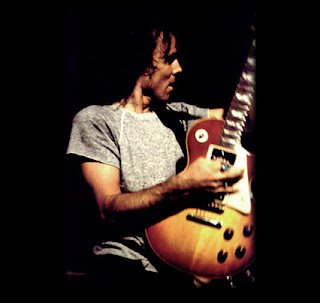 Another rock soldier, guitarist Ronnie Montrose, passed away yesterday after a lengthy battle with prostate cancer. He was underrated, though really quite a brilliant, dexterous player. Adept at various styles, Montrose played with many A-list artists and always raised the game of those around him with his chops.

Remember when people could actually play live without all of the fakery?