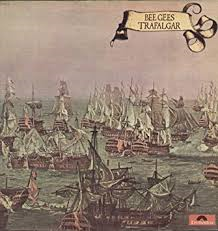 Inspired by the historic naval battle of 1805 that took place west of Cape Trafalgar at the mid-point of the Napoleonic wars, the Bee Gees ninth disc was not a conceptual piece that documented every aspect of the British defeat of the Franco-Spanish coalition. Aside from the cover artwork which featured a reprint of Pocock's painting (The Battle of Trafalgar) and an elaborate recreation of Lord Nelson's death on the inner sleeve, there is little reference to this historical event found in the music. For those who enjoy such trivia, the gatefold shot features Barry playing Admiral Nelson, surrounded by Robin, Maurice, their father Hugh Gibb, Geoff Bridgeford, and an unidentified man in the shadows.

Standing a few feet taller than everything else on this disc is the majestic "How Can You Mend a Broken Heart", which begins with Robin delivering his lines in a vulnerable, almost tentative fashion. Barry joins as the track builds toward the chorus, which has their pitch-perfect harmonies stacked against piano and understated strings. Their melodic sensibility here is balanced by dynamics which draw the listener closer. The full stop before the hook-line isn't anticipated, making that falsetto vocal change-up altogether more surprising. Achingly beautiful, with a universally understood refrain, the Gibbs were rewarded with a their first chart topping single. They run up another contender for stand out selection in the pack with "Israel", which has an ethereal overall feel complements of the orchestral touches and inventive bass work. Their estimable talents as singers lifts the material, though it would be fair to say that the mood here is reserved throughout. Upbeat fare, programmed to move the party to the dance floor, this is not. Primarily focused on song craft, great care is lavished upon every detail in production. Now afforded the luxury of using two-inch, 16-track master tape, this allowed for increased separation of instruments and voices, which inevitably made more refined stereo mixes possible.

Per usual, Maurice is a one-man instrumental army. He also takes (rare) lead vocals on both of his contributions ("It's Just the Way", Trafalgar"). One of the most curious tunes in the "back-nine" is "Don't Wanna Live Inside Myself" which has a verse whose melody is more than reminiscent of "Helpless" (CSNY) and then veers sharply toward "I Shall Be Released" in the approach to the chorus. They had been down this path before with "Marley Purt Drive" from Odessa (think "The Weight"). Subversive humor at work, no doubt. All three brothers could be quite funny in both live shows and interview situations, though that side of their personality was muted in their writing. Closing with the sweeping "Walking Back to Waterloo", Trafalgar ends on a dramatic and classy note. The prevailing tone is one of introspection, which positions this LP as a perfect accompaniment to twilight, adult beverages and headphones. The mix is sublime with enough subtlety to maintain interest. Hypnotic without being soporific, this set has aged remarkably well.

Posted by Sean Coleman at 7:10 PM No comments: Links to this post