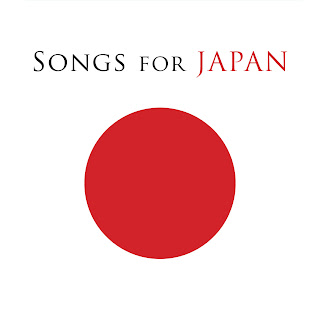 Help spread the word regarding this generous effort.

NEW YORK, March 25, 2011 -- In what stands as a major global music relief effort to benefit those affected by the earthquake and tsunami in Japan, over 30 of the biggest names in contemporary music have joined together for the worldwide release of "Songs for Japan," an unprecedented compilation of 38 chart-topping hits and classic tracks, available worldwide on the iTunes Store for $9.99 starting today (www.itunes.com/songsforjapan). Proceeds from the album's sale will benefit the disaster relief efforts of the Japanese Red Cross Society.

Proceeds from "Songs for Japan" will be directed to the Japanese Red Cross Society (JRCS) to support its disaster relief efforts. The society will use the funds for the ongoing provision of immediate relief and for eventual recovery support to the affected population. The artists participating on "Songs for Japan," the music labels and music publishers have waived their royalties and proceeds from the worldwide sales of the album to ensure that the JRCS receives as much support as possible from this global initiative. iTunes will also donate its proceeds from the album's worldwide sales to the benefit of the JRCS, and has prominently featured the project throughout its stores worldwide.
Posted by Sean Coleman at 1:20 PM No comments: Links to this post 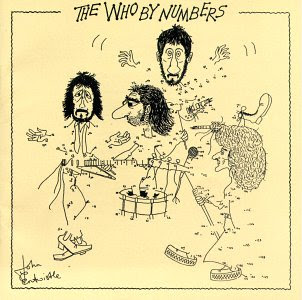 THE WHO BY NUMBERS

Self-referential almost to a fault, the songs that Pete Townshend submitted for approval on "By Numbers" are tough to listen to. Keith Moon was upset to the point that he cried upon hearing the demos. True artistic ambition is realized when the soul of its creator is revealed. Here, every nerve is exposed.

Brutally honest expression wasn't exactly new to the rock scene. John Lennon's "Plastic Ono Band" and Joni Mitchell's "Blue" are works that painted pain in technicolor. This album has always been unfairly relegated to cut-out bin status in the Who catalog. It mines the same territory as the aforementioned LPs and is no less brilliant. That being said, it does not measure up to the grandeur of the work that came before.

What happens to the man who writes about dying before he gets old when he lives to tell the rest of the story?

1975 saw the creative force behind The Who turn thirty. Still a young man, though "old" for the position he held. Pete had driven himself relentlessly to push rock in a cerebral direction, without losing its power. Peering into his future, he came to realize that he could not continue to pour his heart and soul into leaping around the stage and playing the old favorites. Would he rest easy in this deceit?

Self-loathing rears its head as the author refers to himself as a "faker", "a paper clown" in one instance and questions the validity of all his relationships elsewhere.
There is no mistaking titles like "However Much I Booze" and "How Many Friends" for happy, upbeat (brainless) music. Genius coming to grips with burning out under the weight of expectation is more like it.

Called his "suicide note" by the rock press at the time, "By Numbers" actually reflects the early onset of mid life crisis, though that in itself is no less serious. Disillusion even spills over into Entwistle's lone contribution, the excellent, but sarcasm-laced, "Success Story". Only the filthy silliness of "Squeeze Box" manages to break through the gloom.

Musicianship is of the usual high standard that the band had long set for themselves. Entwistle and Moon turn in exceptional performances while Daltrey convincingly conveys the emotion behind each lyric. His interpretive skills were often overshadowed by the blast wave that the other three created when playing live.

"Slip Kid" is the highlight. 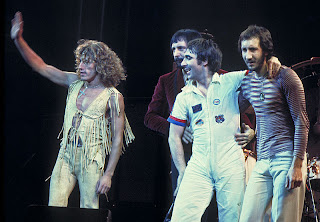 Heartbreaking, given the context, is the Pete-on-ukulele "Blue, Red and Grey".

Glyn Johns produces, bringing the same clarity that made "Who's Next" such a devastating record., though the overall mood of the work is desultory. It still deserves your attention, standing as a pretty brave statement of insecurity from a candid artist, leading one of the most thrilling rock bands of all time.

Playing more like a Townshend solo disc, which is how this should really have been issued, there is a sharp 180 degree turn away from any attempt to create another long form piece. In the grips of a depressive episode, it would have been impossible for Pete to expend the type of energy required to power another monumental spectacular. Quadrophenia had proven to be his last big blast with The Who. Now, he would come around to the thinking of his band mates and settle into touring as a professional entertainer, without the weight of taking "Rock" to yet another level of expression. The band roared through the 75/76 shows, their playing on par with the intensity they had brought to the stage five years earlier. This period would, sadly, herald the final chapter of Keith Moon era Who.

Houston TX, first night of the US leg of the '75 tour.

Posted by Sean Coleman at 1:16 PM No comments: Links to this post