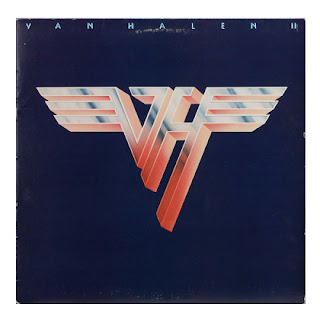 Sophomore Album Syndrome is one of those overused descriptors that those who opine on rock music tend to lean on when tasked with evaluating the much anticipated follow up release from artists who knocked it out of the park with their debut. Upon first spin, the prospective listener may feel that Van Halen II is a bit more restrained in tone when compared to the heart-pounding pyrotechnics that poured from the speaker grills throughout their first effort. Further investigation reveals a concise, impeccably rendered set with subtle charms sprinkled amongst the heavier fare.

Fresh off their first world tour, the musicians were in top form when they trooped into the studio to commit these songs to tape. Completed in a mere three weeks, much of what you hear is the result of first-take magic, without overthinking. That spontaneity is what makes these tracks sound so compelling forty years on.

Easing into side one, "You're No Good" kicks off on an understated note. As the lone cover tune here it is a far cry from the ostentatious opener that "Running With the Devil" provided on Van Halen. A bold move in that they don't attempt to tear your head off from the drop of the needle, yet it really doesn't feel as if the players are fully into this one. Far more successful is "Dance the Night Away" which proves to be melodic, catchy and reveals them to be adept at turning out a perfect pop single without a hint of contrivance. It sounds as if it could have been recorded last week and made a stuck landing on radio playlists. Hard rock swagger with a twist of fun returns with the scorching intro of "Somebody Get Me a Doctor". This one bears all of the hallmarks of "live off the floor" excitement, with Alex Van Halen putting on a masterclass in precision playing. Listen to his ride cymbal work during Ed's solo. Roth rides the wave with a wink and a gun delivery, brilliantly supported by the harmony vocals of Michael Anthony. The laughs continue with "Bottom's Up" and that vocal breakdown where the lads get a case of the giggles on the mic. Anthony pulls off some tasty jazz chops on "Outta Love Again", whereas the Van Halen brothers simply shred and burn right into the run out grooves. Flipping over to the second side, "Light Up the Sky" and "DOA" offer hyper-adrenalized riffing that would make any metal head eternally happy. Multi-faceted in their approach, there is something for everyone in this action packed thirty minutes and change.

The biggest knuckle ball delivered on VH II? Lasting a scant sixty seconds, "Spanish Fly" offers tapped harmonics with a roller coaster run up and down the fret board of Eddie’s Ovation nylon-stringed guitar. All of the doubters who wrote off his finger tapping technique as the product of stomp-box manipulation and studio trickery were silenced in one fell swoop by this stunning display of virtuosity.

Similarly, the crystal-clear, water droplet harmonics that herald "Women in Love" are sonic perfection. If asked to summarize the genius of EVH in a quick clip, this is exactly what I would queue up. No exceptions.

Closing strong with the groovy "Beautiful Girls", you've got a drink in your hand, toes in the sand and Van Halen II cranked. What more could you ask for?
Posted by Sean Coleman at 4:35 PM No comments: Links to this post 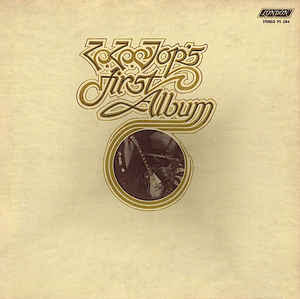 Long before Billy Gibbons and Dusty Hill launched a personal campaign to bring down the Gillette Corporation, they, along with drummer Frank Beard, recorded their debut LP and unleashed it on an unsuspecting public in early 1971. The Texan trio emerged fully formed from their chrysalis, with great tunes, sturdy chops, sexually charged lyrical subject matter and a healthy sense of humor all blended effortlessly in a hypnotizing boogie. The overriding theme here is blues, though they wisely don't stretch the material into the outer limits of tedium, opting instead for concise, punchy arrangements that never overstay their welcome.

The concept of the power trio was honed to perfection in the sixties with Cream and The Jimi Hendrix Experience in the vanguard of what could be accomplished with a dash of signal phase distortion, talent and the will to take Chicago blues to places that it had never been before. In the case of UK based musicians, they were besotted worshippers of BB King, Muddy Waters, Willie Dixon and Howlin' Wolf (to name a few). These legends were unfairly underappreciated in their own country, though the music that they telegraphed across the pond was welcomed warmly by English musicians. They brought this sound back to its birthplace, reminding listeners of the great treasures that they were ignoring in their own back yard. Curiously, ZZ Top felt the same indifference toward their inaugural efforts back in the USA.

London Records to the rescue.

Yet again, the reps from this British label were immediately hip to what they heard and signed the band to a deal. Gibbons and team did not disappoint. Don't buy the line about the group lacking polish here or requiring more time to get their act together. They were already bad-ass. Audiences would eventually catch up and propel them nationwide.

Clocking in at a mere 35 minutes, this platter is heavy on groove, beautiful guitar tone and every note is delivered with authority. Kudos to producer Bill Ham for capturing the warmth of these performances directly, allowing the personalities of each player to shine in a very simple mix. He snags co-writing credits on a few tracks in the bargain.

Right out of the gate, "(Somebody Else Been)Shaking Your Tree" grabs you with a harmony laden hook, complemented by the sweet strains of pedal-steel. Gibbons soulful vocal gives way to a brief face-melter and things wrap up under three minutes. It's a model of economy and surprisingly pop oriented. "Brown Sugar" follows, throwing a 180 degree change-up with a solo intro that delves deep into the blues. Gibbons provides a drop dead imitation of the subtle feedback that Hendrix used to ease into "Foxey Lady". Before you can catch your breath, Hill and Beard kick in hard and make you forget all about the Stones song of the same name. The lads got the jump on Mick and company by a few months in terms of using the title, though the lyrics are far less subtle. Speaking of Jimi, he very generously took Gibbons and his old aggregation (The Moving Sidewalks) out on tour as an opening act in 1968. Billy has spoken in glowing terms in interviews about how Hendrix got the sonic results he wanted out of his gear. One of his tricks in achieving a particular tone was to remove the scratch plate from his Stratocaster so that he could manipulate the toggle switch to stay put in five positions instead of three. This opened a whole new avenue of tonal control, which wasn't lost on his young protégée. The tasty sounds that Gibbons coaxes from his axe on these tracks shows how much he learned from the master and how expertly he incorporated these important lessons into his own style.

Overall, this set is pretty spotless. They prefigure just about every rock ballad that Lynyrd Skynyrd would commit to tape with "Old Man" and provide highlight reel fodder at every turn ("Just Got Back From Baby's", "Squank" and the closer, "Backdoor Love Affair"). Particularly impressive is how they get maximum return out of simple, rotating riffs while subtly deploying shifting time signatures to showcase Gibbons' nimble fingers ("Going Down to Mexico") before returning to the main motif. In the hands of lesser musicians, playing straight, 12 bar can be a stultifying experience for those who are subjected to it. By contrast, Gibbons, Hill and Beard created pure joy in the room, with nary a wasted note to be found. That chemistry is real and rare. While none of these selections found their way onto radio playlists or greatest hits packages, all of the cuts retain a freshness that doesn't pin them down to any era.

Back in the mists of the early 80's, I had a pretty magical introduction to this very fine debut. Eliminator was all over radio and MTV at this point in time. An older friend, who turned me on to a great deal of excellent music, had agreed to give me a lift to join some friends at a party in "the city". It was winter, roads were dodgy and the drive from our rural community took longer than usual. Taking my place in the passenger seat, he handed me a lit joint and popped a cassette into the deck. For the next half hour, I was completely mesmerized by the slippery rhythms and guitar wizardry that emanated from the speakers. There was no need for conversation. 15 year old mind was blown. At my request, he made a copy that would be virtually worn out from nightly listening in headphones. Eventually, I hunted down the vinyl pressing that is with me to this day. Impossible to put a price tag on that type of gift.

Following the massive success of Eliminator, a decision was made to remix their first six releases in an attempt to give these discs a contemporary feel. The results were disastrous, with drums that sounded as if they had been recorded in an airplane hangar and guitars that were pretty much neutered in the process. Do yourself a favor: find an original copy of ZZ Top's First Album on vinyl and avoid the sonically butchered version.

Accept no substitutes.
Posted by Sean Coleman at 11:32 PM No comments: Links to this post