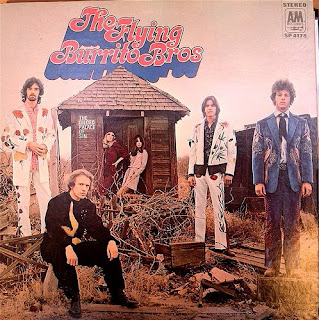 THE GUILDED PALACE OF SIN

This record could very well be the undisputed, heavyweight champion of brilliant, yet forgotten music. Though their debut put them in the vanguard of the country rock style, The Flying Burrito Brothers struggled to find an audience. Groups that followed (The Eagles) would steal and smooth the Burritos’ sound into what Gram Parsons described as, “a dry, plastic fuck.”

Parsons and Chris Hillman put the band together, drafting Chris Ethridge, "Sneaky" Pete Kleinow, plus drummer Jon Corneal to fill out the lineup. The Guilded Palace of Sin was recorded and released in 1969 to critical acclaim, though record buyers barely acknowledged it.

Being a step ahead of the music currents of their time, coupled with internal problems and lack of promotion ended the band before they could get started. Parsons jumped ship after the second album. Critics now trip over themselves, writing about Gram Parsons and his vision of "Cosmic American Music", though not many gave him the credit he was due in his lifetime.

Classic records usually deliver an immaculate "Side One", packing the megaton force of an A-bomb, leaving the listener barely able to comprehend what will be served up next.

This is no exception

"Christine's Tune" is the Everly Brothers on acid. Sneaky Pete's unconventional pedal steel work is incredibly inventive, while the Parsons/Hillman axis do their best "Phil and Don" harmonies. "Sin City" is a fantastic soundtrack to a hangover, filled with imagery that is less than impressed with the LA scene in the late 1960's. It's a glorious creation that reinvents the wheel in four minutes. Both tunes were co-written by Hillman and Parsons.

Soulful covers showcase the versatility of everyone involved. "Do Right Woman" fuses country with an R & B feel (Aretha Franklin had a version of this) and "The Dark End of the Street" is more of the same. Parsons' vocals display a degree of vulnerability that makes each stand out. The arrangements are tasteful with extended jamming muted in favor of playing in service of the songs.

"My Uncle" rounds out this killer side. An uptempo look at draft dodging, it has a great hook and provides subtle comment on what was then a hotly debated subject.

Parsons and Hillman were motorcycle enthusiasts, writing "Wheels" in tribute to the freedom of gliding along on just two of them. Hot Burritos 1 and 2 really deserved better titles. They are the most passionate vocals that Gram Parsons ever committed to tape, impeccably supported by the assembled musicians.

"Do You Know How it Feels" is a real shit kicker, prefiguring Dwight Yokam by about 20 years. Short and sweet. The LP closes with the sombre, churchy organ and piano based Hippie Boy, a spoken word commentary on the 1968 Democratic Convention riots. It is well done, though redolent of its time.

Topical reference is generally avoided ("My Uncle" excepted) so this set has aged quite well. The absence of late sixties, day-glo paint poured over the proceedings also extends the shelf-life of these songs.

Vinyl copies are tough to find and are expensive when you do.

Recent repackaging on CD has given this music that fused country, rock, soul, R & B and gospel a profile in the digital age. Despite the magic that happened to create this disc, it remains woefully under appreciated due mostly to lack of distribution.

Now that you're aware of it, look for a copy. Well worth the price of admission.
Posted by Sean Coleman at 9:16 PM 1 comment: Links to this post

Be careful, lads. It is here that the drugs will start doing YOU!

One of two sets unleashed by the band in 1967, this was unlike anything they did before or since. The US version of this LP cut "Backstreet Girl" and "Please Go Home", replacing them with "Let's Spend the Night Together" and "Ruby Tuesday". Whether this tampering with the running order improved the package or not is subjective. The latter two selections were big hits, duly promoted on radio as well as the small screen. Check out this "live vocals with a backing track" performance, taped for the Ed Sullivan show.

Dividing their time between LA and London while recording, the results run from the barrelhouse fun of "Cool, Calm & Collected" (kazoos? why not?) to the excellent "Connection", which shares honors with "Miss Amanda Jones" as the most driving piece etched into this disc.

"Guess which drug I just discovered?" colors "Something Happened to me Yesterday". Keith sings lead (his debut on record) along with Mick backed up by a prominent tuba. The cover photo reinforces the "trippy" nature of the work, with three of the five Stones immersed in the burgeoning drug culture that enveloped their peers during that era.

Brian Jones turns in his last focused efforts before he was completely dragged down by substance intake and gradually elbowed from the group. In addition to guitar and some vocals, he also handled accordion, vibraphone, harmonica, recorder, percussion, kazoo, saxophone, dulcimer and organ. Four different piano players (Jones included) bang on the 88s throughout.

"She Smiled Sweetly" is the only track that should be buried in a landfill.

Overall, the impression left here is mighty fine, with the Jagger/Richards song writing engine in top form. Underrated and overlooked, this slice of Swinging London is worth checking out.

Now for some trivia from cosmopolitan raver/drummer Charlie Watts:

"Andrew (Oldham) told me to do the drawings for the LP and said the title would be between the buttons. I thought he meant the title was "Between The Buttons", so it stayed." 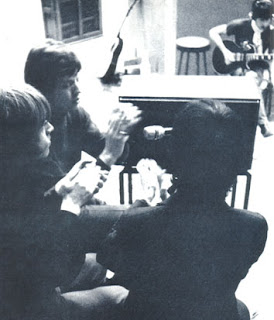 WARNING: Look for a vinyl copy of this, if you truly want a fair evaluation of how it was originally presented.

The original issue of this collection on CD was handled poorly which is really a shame. Extreme liberties were taken with the stereo mix. Some tracks sound as if they have been presented in duophonic format (transferring the mono master to two separate channels, boosting the low end frequencies in one channel and emphasizing the high treble frequencies in the other) which further kills the listening experience.

The 2002 ABKCO reissues are an improvement, though audiophiles are advised to hunt down the London Records CD version (available in Europe and Japan prior to 1997) as it has the best sound of all digital releases.

Naturally, Mick has long since disavowed this material, calling it "rubbish".

Definitely in the top five of all Stones LPs.
Posted by Sean Coleman at 7:54 PM 1 comment: Links to this post

Labels: BETWEEN THE BUTTONS, THE STONES 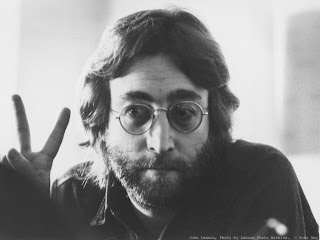 I hope that it isn't too cold in Central Park tonight, so that those gathered have a chance to play, sing, scream and enjoy the timeless music of a guy who crossed into the next dimension 31 years ago today.

It would be interesting to hear what 71 year old John Lennon would have to say about contemporary events. He likely wouldn't mince words. War and poverty still wreak havoc in many areas of the world. Greed drags down our attempts to put a better face on society.

He didn't have all of the answers, though he did question the madness in the methods of authority figures in his time. Remember the jokester, wordsmith and genius by listening to some of his music tonight. Messages of peace, love and hope speak volumes.

Posted by Sean Coleman at 9:07 PM No comments: Links to this post