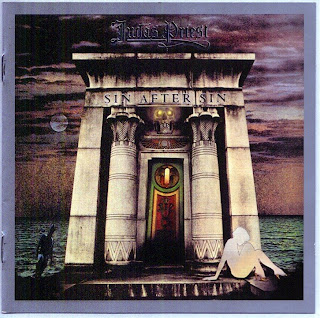 Definitely brings back many hazy memories of high school. Occasionally, side one of this disc would be in rotation in my "soundtrack to pass out for the night routine". Worked like magic, too. "The Last Rose of Summer" provides a lush, soft landing pad for that gelatinous mass of chemicals and electric impulses, settled into a groove on the pillow as it ends your programming day.

It's a phenomenal song, with a touch of Hendrix and the peerless vocals of Rob Halford. Unfairly, it has often been panned as a "Rain Song" rip-off. Have a listen and see why it stands up.

Third album from the "metal gods" and it is a truly fine offering, balanced on the precipice of the sound that they would soon fully embrace and scorch many devoted eardrums with. Roger Glover's production is clean and punchy, playing up the strengths of all involved, with an attack that's fairly advanced for 1977. The group did have "exploding drummer syndrome" so the drum stool was filled here by nineteen year old Simon Phillips, who would go on to become a top class session man. His credits are astounding as is his work on this set.

Honed to perfection, the twin guitar mathematics of Glenn Tipton and K.K. Downing raise the game on a strong set of songs. "Sinner" and "Dissident Aggressor" are standouts, though, as with the bulk of their material, they rarely forgot to employ melodies with the mayhem. Those that have written them off really need to take another listen. Halford should get far more credit than he has, as he is a fantastic singer.

"Starbreaker" from Tokyo in 1978. Les Binks on drums. He was an excellent musician and writer but quit after only two years with the group. He didn't explode, though he takes a nice solo here.

What should have been the closing track? Their ingenious reworking of Joan Baez's "Diamonds and Rust". Worth mentioning that this song, inspired by Bob Dylan, is covered so well by a band that was named for one of his songs ("The Ballad of Frankie Lee and Judas Priest")

Priest would soon undergo a wardrobe change and enter the 80's as a much heavier entity. "Sin After Sin" is an excellent piece of plastic and ranks with the best of their seventies releases.
Posted by Sean Coleman at 11:34 PM No comments: Links to this post