BOC: ON YOUR FEET OR ON YOUR KNEES 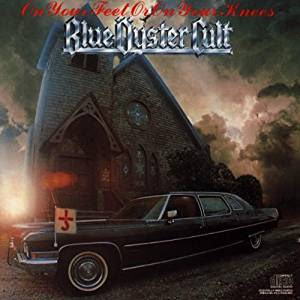 Following the release of three decent (albeit largely unnoticed) studio albums, Blue Oyster Cult decided to package their live show for direct injection into the homes of their fans in early 1975. Two black circles were duly filled with performances culled from a number of venues on their (then) most recent tour. This double live set cracked the US top 30 (topping out at # 22 on the Billboard chart) serving to bring their sound above ground, while deservedly garnering the attention of a wider audience in the commercial sweepstakes.

Hey, I heard a couple of people sayin' Hot Rails to Hell

Relentless gigging will turn any loose aggregate of musicians into a well-oiled machine. Such was the itinerary for the pride of Long Island in the early seventies. While the quintet squeeze every drop of blood from their tunes onstage, they do remember to remove their collective feet from the gas and allow for dynamic downshifts in the arrangements. "Seven Screaming Dizbusters" is one of the best examples of that, along with the moody "Then Came the Last Days of May". Crowd reaction is retained, rather than downplayed in the overall mix. Listen to the faithful as they respond rapturously after getting scorched by a particularly frenetic, extended version of "ME 262" which closes side three. People went nuts for these guys and they packed houses without the benefit of a hit single or any significant unit shifting.

Curiously, the label makers in the industry have been content to brand the output of this truly under-appreciated band as "Heavy Metal" and unfairly rank them below their contemporaries. Part of the equation comes down to a low profile in the lead vocal department. All of them could sing, though there was no Plant, Gillan, Rogers or Mercury that really stepped out front to own the stage. This is what bumps you into the economy class seats in terms of early to mid 70s purveyors of hard rock. Not quite Foghat nor were they Uriah Heep. Traces of prog flirt with "boogie" riffs, though embracing lyrical subject matter that was at times unfathomable (What the hell is "Harvester of Eyes" REALLY about??) was another obstacle to contend with in terms of gaining entry to the mass public imagination. Nevertheless, the lads did bring a not-so-secret-weapon to the party.

Precise, fret-scorching virtuosity lifts just about every cut on this gem into the stratosphere. Why this man does not figure in the conversation when it comes to six string wizards is a puzzle. His partners in crime provide perfectly obstreperous, yet tasteful, sonic support. The Bouchard brothers keep the engine stoked while allowing Roeser and Allan Lanier to shine. Buck's solos defy gravity. "Cities on Flame" is taken at a positively caffeinated pace. All of the material found here comes off far better than the studio versions. Eric Bloom keeps all of the stories straight behind ever present shades.

These guys could really play

Pound for pound, this is the finest BOC live album. Definitely stands as one of the most exciting documents of its kind from that decade, coming across raw, sweaty and real. Some Enchanted Evening (1978) and Extraterrestrial Live (1982) have their moments, though both are uneven, without an eighth of the intensity that crackles from the speakers when this disc is cranked. While it has resided in my CD collection for many years, I have only obtained a vinyl copy very recently while rummaging through the stacks of a used record store in San Francisco. Listening in the intended format inspired this post.