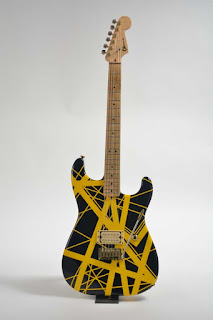 For every person who has been captivated by the look, feel and sound of the guitar, this is an event that musicians and serious collectors alike will need to etch in their calendars. Invaluable is teaming up with Guernsey’s Auctions to present Guitars at Auction. If you don't know Invaluable, they are an online auction marketplace with new collectibleslike the guitars in this auction up for grabs every day!

Featuring 379 live auction lots of an assortment of almost impossible-to-find instruments, there will be several private collections on offer including approximately 20 instruments that come directly from jazz legend George Benson.

There will be live preview showings on February 25th and 26th, each running from noon to 6pm in advance of the big day. Here is a sneak preview of the most noteworthy auction lots:

Lot 439
Eddie Van Halen's 1982 Charvel Guitar
Estimated Price: $55,000 - $75,000
Eddie Van Halen’s 1982 Charvel, made for, owned by, and played by Mr. Van Halen himself, with 1982 video and other full documentation. Eddie Van Halen's iconic original black & white striped "Frankenstein" guitar (which he later modified in the late 1979 with an additional layer of red paint) was built from a body and neck he bought from Wayne Charvel and Lynn Ellsworth in the mid 1970s. Van Halen continued to purchase various parts from Charvel during the late 70s that he used to build guitars, and he even played a guitar built by Charvel based on the single-pickup design of his Frankenstein.

Lot 284
Stevie Ray Vaughan-Owned & Signed c. 1966-67 Fender
Estimated Price: $250,000 - $500,000
Stevie Ray Vaughan-Owned & Signed c. 1966-67 Fender Stratocaster. Serial#: 191460. Stevie Ray Vaughan owned and signed 1966-67 Fender Stratocaster in a three-tone Sunburst finish. The signature is broad and in gold ink, dated " '90," and also present on this guitar are some worn stickers; one group of stickers reads "SRV" and the other, located on the pickguard, is rather worn and faded but the word "Cobras" is visible. Vaughan played with Paul Ray and the Cobras in Austin, Texas from 1975 until 1977. This Fender's silver neck plate is etched in block letters "STEVIE RAY VAUGHAN DALLAS, TX." Paperwork inside the case with more of Vaughan's handwriting.

1966 Gibson LG-1 & Continental Music Company Guitars
Estimated Price: $125,000 - $175,000
1966 Gibson LG-1 & Continental Music Company Guitars, In Cold Blood. 1966 Gibson LG-1 Sunburst finish. This guitar was used in the movie In Cold Blood. They put a substance on the finish to keep it from reflecting on camera. Robert Blake gave the consignor this guitar in 2001. In 2002, the consignor produced a vintage guitar show in Las Vegas at the Hard Rock Hotel and this guitar was featured at this show. The newspaper article from Las Vegas in 2002 is a companying the guitar. Comes with modern case.

Check out all details on this great event here
Posted by Sean Coleman at 12:14 AM No comments: Links to this post 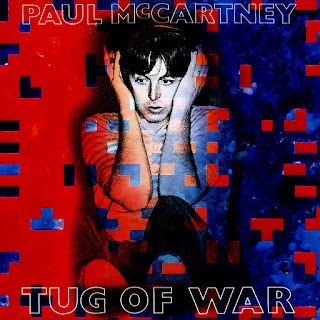 Thirty three years after its initial appearance, which was swiftly followed by commercial success (US and UK #1) and critical plaudits, the Tug of War LP has been given an aural update. Those that own an original vinyl copy may want to try an A/B comparison of both formats while simultaneously screening Caddyshack. Curiously, Judge Smails gets clocked in the pills just as "Get It" ends, with Carl Perkins' laughter timed perfectly to mock his agony.

Ted is dead man, miss him, miss him

Tug of War may have ended up as another Wings record in an alternate universe, though this progressed no further than a few rehearsals. CBS had recently signed Paul to a very rich deal with an advance of 14 million along with a few other perks. Their executive team wanted a retrospective Wings set, stacked with recent hits to offset the poor sales of Back to the Egg. McCartney offered to couple a mix of unreleased tunes with more familiar fare, provisionally titled "Hot Hitz and Kold Kutz".

This plan was given a thumbs down...

Shortly following this series of non-events, recent recruits Laurence Juber and Steve Holley were advised by their boss that their services would not be required in the short term. A legendary producer was now lined up to direct the proceedings, retiring Wings in favor of a solo project. Denny Laine would remain for a while longer.

This true gent was definitely the only person on the planet who could give direction to McCartney without causing the earth to split apart. Recording would begin in Martin's AIR facilities in London, later shifting to his Montserrat location with top flight musicians joining Paul to further enhance the songs that he had been working up. Never again would he attempt to create the illusion that he was "just part of the band." While he was closing a chapter on the previous decade, terrible news was delivered from New York in early December of 1980.

Nothing less than global shock was felt following the murder of John Lennon. It is one thing for fans of his art to be upset, sad and move on. Quite another matter when that person was a mate, writing partner and someone you knew from home. Though never close following their nasty estrangement in the early seventies, relations between the two men did thaw a bit over time. When recording sessions resumed in 1981, Paul had people around him (George Martin and Ringo Starr) with whom he could share stories of times they had spent with their departed friend. You could include Eric Stewart and Denny Laine in that company, as they had all interacted in the sixties, occasionally sharing bills and getting well oiled together in smoky clubs that catered to nocturnal party habits of musicians in London during that era. The return to business carried with it the grim reality that he could never pick up the phone and reach out to his former bandmate ever again.

Opening with the sounds of an epic struggle that play through nearly half a minute, the title track announces itself gently with acoustic guitar supporting a lone voice. Setting the table for the eclectic mix of styles that are woven into the fabric of this set, the arrangement is punctuated with orchestral decoration as it builds to a majestic breakout of slightly muted electric guitar and drums.


Breaking back down to military snare, a brief bridging section yields to a repetition of the first verse and closes with strings that dissolve into the stuttering tom pattern that sets up "Take It Away" in random White Album fashion. Ringo and Steve Gadd share drum duties on this inventive, catchy tune, wisely chosen as the second single. Sonically crisp, with huge background vocals and a razor sharp horn section, this is a dazzling example of what kind of magic resulted when McCartney had a trusted advisor handling production decisions. Too often his solo work had suffered from a lack of dissenting opinion when it came down to what was allowed to pass quality control. Downshifting slightly, "Somebody Who Cares" is framed with exquisite acoustic guitar work (special mention goes to the note perfect solo) and an uplifting chorus. Stevie Wonder makes his first appearance on "What's That You're Doing" and while the groove is decent, Paul sounds like he is guesting on an outtake from Hotter Than July. While not bad, it isn't great either, overstaying its welcome by several minutes.

"Here Today" is sublime, closing the first side with a touch of class. This fulsome tribute to Lennon remains part of his live set. The second side of the disc is stylistically jarring, whimsical on "Ballroom Dancing", close to, though not quite rock on the lyrically clever "The Pound is Sinking" and sweepingly melodic in the grand, piano centric "Wanderlust", which gives Martin much to work with in terms of augmentation. All three tracks lift the proceedings, though none more so than the surprisingly strong "Dress Me Up Like a Robber" which has gained a position in my estimation as one of the most interesting compositions on the record. Back in '82, I was inclined to skip it, though now that viewpoint has mellowed with the passage of time. In contrast, "Get It" is hokey and should have been relegated to a fun B-side. Though "Ebony and Ivory" was a monster hit, impeccably sung by Stevie and Paul and well intentioned in its theme, it has not aged well. Is it a decent piece of pop song craft? Sure, though it doesn't hold up nearly as well as the others. My vinyl copy of Tug of War, purchased within a week of official release in the spring of 1982, holds great memories though it is with very different perspective that I listen in 2016. This is quite a strong collection with a very talented supporting cast, though there is still a sense that he could have put a bit more effort into what he had to say. Tug of War hits some fairly lofty heights from a purely musical standpoint, though that ambition is thwarted by throwaway lyrics that form the basis of "Get It" and "Ballroom Dancing". Weak spots aside, it is definitely the highlight of his eighties output. The follow up (Pipes of Peace) would prove to be a disappointment on many levels and much of it should have remained locked up.

The 2015 remaster is well worth the investment and sonically brilliant. The Standard Edition has an 11 song companion disc, which consists of demos that preceded formal recording sessions for the project and two B-sides ("I'll Give You a Ring" and "Rainclouds"). There are no huge departures from the arrangements that would grace the final product, though completists will be glad for their inclusion.

Posted by Sean Coleman at 1:34 AM No comments: Links to this post 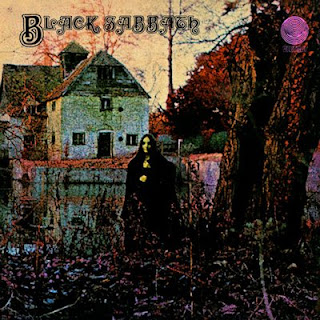 Rainfall, thunder and the distant chiming of a bell herald those ominous three notes that kick off the first Black Sabbath album, which was released 46 years ago today. Recorded quickly in a 12 hour session, their pre-production prep was achieved by playing the songs nightly as part of a rigorous gigging schedule. At the time, guitarist Tony Iommi was criticized for pulling too heavily from the playbook of Eric Clapton (listen to his solo segments during "Warning") and the disc received little in the way of positive mention in the music publications of that era.

Ain't it funny how time slips away

Side one of this set is spotless, with signature guitar riffs, Satan, wizards and exceptional ensemble playing all present and accounted for. In truth, none of the group members pledged allegiance to anything more than making loud, energetic rock. The lyrical subject matter came out of group discussions about how people paid good money to be frightened out of their seats by horror films. It was left to Terry Butler (Geezer to his friends) to craft similarly scary scenarios to accompany their ponderous, inventive compositions. The best of these are the time-signature shifting title track and "Behind the Wall of Sleep", both of which retain their power and originality. The key here is that the material is captured live, without 150 takes to rob the end product of energy.

Side two features two covers ("Evil Woman", pulled as a single and "Warning", which tends to drag) and doesn't come close to the electric thrill created during the first stretch. Ozzy has yet to find his helium voice and sounds as if he hasn't completely cleared his throat at times, though he is excused because of the lighting speed in which this recording was executed.

For collectors, the UK vinyl version included "Evil Woman" and an elaborate gatefold sleeve. The North American release removed this tune, opting instead to insert its B-side ("Wicked World").

Excellent in many respects, "Black Sabbath" is the gold standard in what would soon come to be known as heavy metal. You can crank it up and enjoy right now.

Posted by Sean Coleman at 5:36 PM No comments: Links to this post