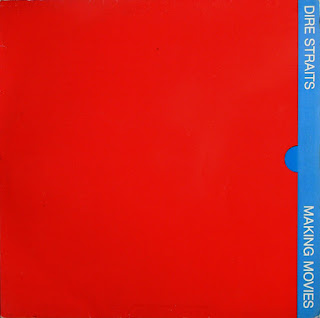 Truly fitting that Mark Knopfler would soon branch out into writing film soundtracks, as his compositional approach on Making Movies successfully completes a transition from small screen vignettes to full blown Cinemascope. He had hinted at these abilities with "Sultans of Swing". You can see the faces of the weary pros onstage in the club, playing because of a long standing passion, the dismissive kids in the crowd who don't have the capacity to embrace or understand the music. There is a bit of backstory on the musicians, though the focus is on Knopfler's dazzling technique as he peels off a number of monster solos. Kitchen sink drama with virtuoso chops.

With Dire Straits third outing the musicianship remains intact, while song craft and production values take a huge stride forward. Jimmy Iovine was brought in to to co-produce, who in turn coaxed E-Street Band keyboardist Roy Bittan to add his nimble fingers to the proceedings. The lyrical subject matter of all three tracks on side one deal with (loosely) love and disappointment. "Tunnel of Love" is a masterclass in how to build mood with a series of guitar breaks that set a bar and then vault over it effortlessly with each new passage. The outro salvos are as close to perfection as you can possibly achieve. Bittan finds space to weave in his parts, always complimenting and never distracting from the melody. Over eight minutes, Knopfler takes you on an emotional journey that ends in a gut-punch as the protagonist realizes, belatedly, what has actually been lost.

She took off a silver locket. She said remember me by this.
She put her hand in my pocket. I got a keepsake and a kiss.
And in the roar of dust and diesel I stood and watched her walk away.
I could have caught up with her easy enough, but something must have made me stay.

Utilizing the amusement park as a backdrop is inspired and as the piece downshifts, there is yet another veiled reference. The Spanish City in question is actually an English fairground in Whitley Bay.

And girl it looks so pretty to me, like it always did,
Like the Spanish City to me when we were kids.

There is a depth to the writing that allows the listener to easily get swept into the narrative, yet it doesn't cross the line into pathos. What comes next is the very clever "Romeo and Juliet", which outlines a relationship doomed by poor timing. Framing the overall storyline with regret over an inability to maintain what was initially a strong bond, the updated version of Shakespeare's star-crossed lovers suggests that the narrator was there in full support of "Juliet" as she aspired to make it in showbiz and was unceremoniously dropped as a partner when that dream was achieved.

Come up on different streets they both were streets of shame
Both dirty both mean yes and the dream was just the same
And I dreamed your dream for you and now your dream is real
How can you look at me as I was just another one of your deals?

One of his best songs, bar none. The stutter-stop "Skateaway" closes out an absolutely spotless 22 minutes of music. Nothing less than a crowning achievement in their recorded legacy.

There is also a second side.

Anticlimactic after being bowled over by what precedes it, the back nine of this remarkable LP is marred only by the closer ("Les Boys") which has no business sitting alongside the other material here. Apparently, they had "Twisting by the Pool" in the can at this point. It would have made a far better substitute. "Expresso Love" and "Solid Rock" are definite highlights of the pack, though both return the set to earth without compromising the high standard that makes this disc so compelling. I would rank it at the very top of their discography in terms of substance and sheer brilliance across the board. Brothers in Arms would be a commercial bonanza for the band a few years later, though this is Knopfler's finest hour. Spin it again, as it has aged beautifully with enough nuance to keep you coming back for repeated listens.

Posted by Sean Coleman at 5:04 PM No comments: 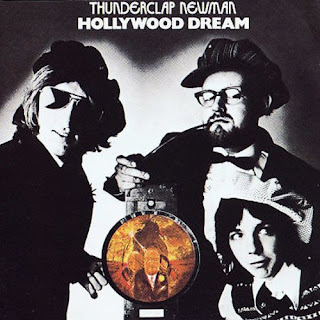 This subtle charmer of an LP is surprisingly solid, considering the mile-wide delta that separates the personalities of the group that were brought together to write and record it. John "Speedy" Keen, Andy Newman and Jimmy McCulloch formed the nucleus of this aggregation. Hollywood Dream features great melodies, strong performances from all involved and excellent fidelity. Pete Townshend was responsible for the fine production job, assembling the aforementioned players and handles all bass work on the record.

Quirky and catchy, "Hollywood #1" leads off with the author lamenting the bygone days of old Hollywood with Newman rolling over the 88s all on his lonesome in the outro, as if there was no space for his part within the body of the tune. "The Reason" follows, bringing another stellar outing from the musicians. McCulloch turns in a scorching, face melting solo (one of a few stunners that he contributes here) that raises the game several notches. Excitement pours from the speaker grills into the fade. Astounding work from a lad who was all of fifteen years old when he did these sessions.

Who aficionados take note: The arrangements on a number of tracks are redolent of the approach that Townshend took while composing the demos for Tommy (think "1921" and "Sally Simpson"). As principal author of the majority of the material, Keen's work bears a similar stamp of that of his former boss. This is a plus, though it doesn't detract from the unique songwriting vision that he brings to the table.

"Accidents" is the cornerstone piece of the pack. Wildly adventurous in the structure, this multi-part composition weds grim subject matter (the untimely ends of several children) with free form experimentation. These flights of fancy were born out of the revolution in sound that began to take root in the mid sixties. Casting off the conventions of 2-3 minute running time, whole sides of vinyl could be swallowed up by a single theme. Clocking in at nearly 10 minutes, this epic cut ends with a relentless mantra that takes you right to the run-out grooves.

Life's just a game, you fly a paper plane, there is no aim

Though it was an unlikely candidate for a single release, it was edited and duly issued as such. It failed to make an impression on the charts and works much better in all of its unexpurgated glory.

Highlights abound on this disc which includes an immaculate Dylan cover ("Open the Door, Homer") the instrumental title track (written by Jimmy and Jack McCulloch) and the closer, "Something in the Air" which had already scored them a number one in the UK in 1969.

Call out the instigators
Because there's something in the air
We've got to get together sooner or later
Because the revolution's here, and you know it's right

Known by contemporary audiences for the dead-on cover that Tom Petty recorded for his greatest hits compilation in the early 90s, it is a shame that the original doesn't get played on classic rock stations with the same frequency as other hits of that era. It is a superb song in every respect. With so much to commend it, it is surprising that Hollywood Dream was a commercial bust when it initially appeared in 1970. Keen's falsetto can be a bit overwhelming in large doses, yet that is the only area where potential points could get deducted. It has been stated that they may have waited a bit too long to deliver on the full-length project following the success of "Something in the Air", though 50 years on that's a moot point. Regrettably, this line up would not produce any further music together. MCA re-issued it with different cover art in 1973, though it did not stir any resurgence of interest in the band. This is the vinyl version that I own and am currently spinning. An original pressing will cost you up to 100 dollars or more. 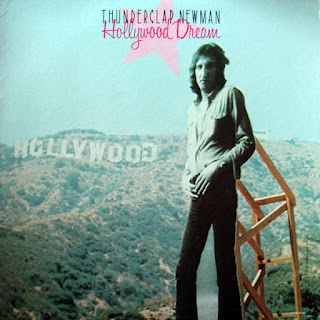 Guaranteed that this unjustly forgotten gem is worth every penny that you'll spend to add it to your collection.

Posted by Sean Coleman at 7:33 PM No comments: