THE LAST WALTZ AT 37 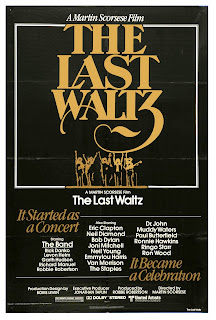 Weary, moribund with a touch of alcohol/drug fueled dysfunction thrown in to make things interesting , the five members of The Band decided to make their exit in grand fashion by serving up one big musical Thanksgiving feast at the Winterland on November 25th, 1976. Bringing a host of famous faces to perform alongside the quintet was an added bonus to those who secured a spot in the audience. Ask Martin Scorsese to capture everything on film? Now it becomes a momentous evening.

Despite having weathered the steady decline of their LP sales as the seventies progressed, internal interest in the group dynamic was waning. The spirit of communal creativity and work ethic that had fired their first two records had all but disappeared. Northern Lights/Southern Cross was a surprising return to form but that disc had to be squeezed out of them, taking a long time to complete. Uninspired in general, Islands could have been just as easily titled "Contractual Obligation". Robbie Robertson did not have much to say at that point, left unsupported by certain players whose debilitating habits had gained control of their calendars. The decision to pull the plug was met with a mix of consternation and relief.

Moving ahead with their plan to stage a monster send off, booze flowed, lines were chopped, turkey dinners prepared and consumed. Whispers that Dylan would show up were abound.

The resulting film is a gripping document, slightly pretentious in places and an unintentional wake for sixties attitudes that were swept away by what Tom Wolfe would christen as the "Me Decade". Given theatrical release in 1978, it remains a very stylish farewell.

Musically, this is an incredibly tight affair with plenty of highlights. Having watched the footage many times over, it still retains a freshness that can mainly be attributed to the timeless quality of the songs. Joyous abandon can be witnessed on the faces of the musicians as they get swept up in moments that we are very fortunate to have etched in celluloid. From this vantage point, all of the big names that grace the stage are still young and in full command of their power as performers. Flashes of brilliance as Dr. John tickles the ivories in an extended solo piano outro to "Such a Night", the wicked grin of complicity that Neil Young and Rick Danko exchange during "Helpless" with Young wired tighter than an E string thanks to a buffet of coke that he had availed himself of before stepping out on stage. Clapton's guitar strap giving way and his neat recovery as both he and Robertson play like madmen, Levon's powerful reading of "The Night They Drove Old Dixie Down" putting 100 years of southern anguish into a perfect few minutes. Van the man, resplendent in his sparkling purple suit, blazing through "Caravan" after a few whiskeys. Joni Mitchell? She turns in a stunning version of "Coyote". It's all there along with a sense that this isn't simply a loud, happy celebration of one of the most understated and influential musical aggregations that ever was. You are watching the spirit of a bygone era making one last, flickering appearance. Mr. Zimmerman strolls out toward the end to cap an amazing night. Drained and exuberant, all of the players assemble to join him and lend their voices to "I Shall Be Released".

With the three main voices of The Band no longer with us, The Last Waltz gives contemporary listeners a chance to experience the ragged, soulful beauty of the music. Make no mistake, these guys were top drawer in every respect. If you do own a copy, throw it on and turn it up really loud. That's what birthdays are for, after all.
Posted by Sean Coleman at 10:07 PM 2 comments: Links to this post