AND NOW, A WORD FROM THE PRESIDENTS...

Twenty years (and change) pass in the time that it takes a ninja to overtake you in a shady grove.

Posted by Sean Coleman at 12:04 AM No comments: Links to this post

DIG, IF YOU WILL, THE PICTURE OF ME, MARVIN GAYE AND THE KIDS...

When Prince started to grab the mass libido in the eighties, I didn't pay proper attention to what he was doing. Caught up a couple of years later, only to find the fingerprints of multi-faceted genius all over the music. "Alphabet Street" and "Hot Thing" are my two favourite individual tunes, though there is so much to explore. (The Black Album and Sign of the Times are great audio spaces to get lost in for awhile.)

If you pay attention to the message being sent, you gain greater insight into the person and their perspective.

This type of artistry is not commonplace and that voice will truly be missed.

Until next time...
Posted by Sean Coleman at 3:24 AM No comments: Links to this post 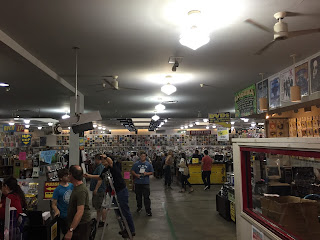 Can't think of a better way to celebrate record store day than paying a visit to Amoeba Records on Haight Street in San Francisco. Flipping through the bins, hunting for albums has been one of the great pleasures/obsessions in my life since childhood. It was truly fantastic to see multi-generational representation on display, especially with respect to those snapping up vinyl.

For a paltry $2.99, I replaced my long lost copy of Pete Townshend's 1982 solo LP, All the Best Cowboys Have Chinese Eyes, a review of which you will find here 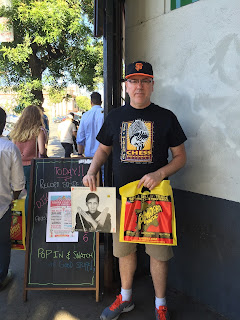 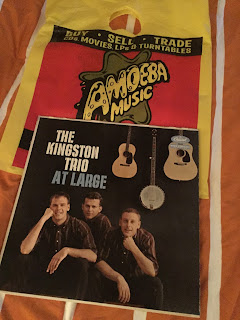 Sincere thanks to those who actually take time to drop by and read these posts. Thousands of hours of listening time have inspired every word. 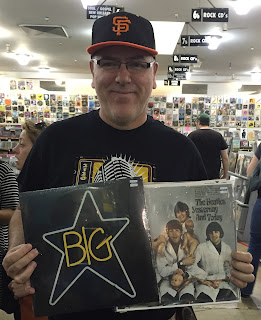 Posted by Sean Coleman at 12:11 AM No comments: Links to this post

HOUSES OF THE HOLY

Representing a massive creative step forward, Zep's fifth saw the "blues" subtly muted in favor of experimentation. There are one or two missteps into genre-hopping, though the other tracks make you forget about that.

Carrying the torch passed from power-trios-with-a-singer (their template being The Jeff Beck Group), Zeppelin upped the ante considerably. Having multi-instrumentalists who play everything equally well is especially fortunate.

Despite this, astringent sarcasm generally crept into any critical evaluation of this band while they were active. "A limp blimp" was one of many dismissals of "Houses of the Holy", however difficult that is to imagine.

Key to the strength of these tunes are the impeccable arranging talents of Page and Jones, Bonham's rock solid foundations and the instrumental prowess of all three. Plant's singing shows greater maturity and style.

"The Song Remains the Same" stands as one of Jimmy Page's finest creations. Multi-part 12 and 6 string overlays do battle with the bass over an almost prog like series of time changes. Exquisite textures color "The Rain Song" which strongly echoes Tony Iommi's employment of mellotron string parts in "Laguna Sunrise". Hard rock detours into "Moody Blues" territory here, though it has an extremely warm vocal track with Page using a Gsus4 (D-G-C-G-C-D) tuning.

Dynamic performances lift "The Ocean" and "Over the Hills and Far Away", which gave guitarists iconic riffs to chew on in garages for years (that samplers could rip in 30 seconds.) "Dancing Days" remains my personal favorite with four on the floor Bonham kicking the ass of an odd chord sequence. Page's mid-eastern flavored refrain is the icing on the cake. While "The Crunge" is a fun James Brown tribute, neither it nor the lead-footed butchery that passes for reggae in "D'yer Maker" should have been included. These musical practical jokes would have been much funnier on "Coda".

Led Zeppelin pursued their craft while flying well below the radar, shunning the glare of the media spotlight. Letting the music take precedence over personality, they didn't even appear on the album jacket. Below is a photo of Giant's Causeway in Northern Ireland where the cover was originally shot. 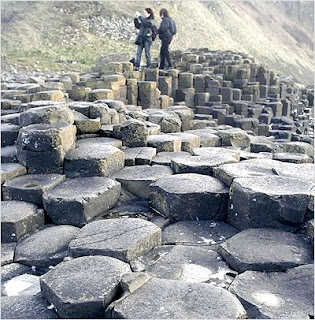 What the band had left on the cutting room floor from these sessions represents a huge missed opportunity. Had "Houses of the Holy" (song) and "The Rover" been substituted for the weaker cuts, it would have been a perfect disc.

Posted by Sean Coleman at 1:56 PM No comments: Links to this post

Posted by Sean Coleman at 11:10 PM No comments: Links to this post 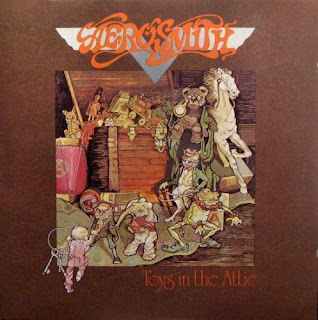 This mighty slab of mid-70s Aerosmith turns 41 today. Young, high and on a creative roll with their third (and best) album, no less than three tunes from this set remain on classic rock radio playlists. These sessions caught the band in an incredibly inspired mood. Opening with the scorching title track, there is an excellent balance struck between aggression and space in the most exciting three minutes that they ever laid down. Tom Hamilton's bass figures almost serve as a lead passage in the break, the drums are given a chance to breathe in the verses and the guitars cut like a dentist's drill. Steven Tyler nails every syllable.

Steering the proceedings toward an auditory version of a breather with "Uncle Salty", there is a definite, trippy late sixties feel achieved with great care taken to accentuate the chiming rhythm guitars. Topped with a jazzy drum pattern and oddly Beatle-like arrangement, it is one of their most underrated tunes. Back in high school, I swapped Def Leppard's High 'n' Dry cassette for this one and listened to it incessantly. Hands down, it's still my favourite Aerosmith track.

It's always a sunny day outside my window...

Boasting riffs that would make their authors cartoonishly rich, "Walk This Way" and "Sweet Emotion" ensured the immortality of this release, though the rest more than hold their own. Lots of tasty guitar interplay from Perry and Whitford makes "Adam's Apple" stand out (great lyrics, too) and "No More No More" is straight up rock and roll. There is even an unsolicited, two minute dick joke for collectors of 78s. What more can you ask for?

Enough stylistic variation is present to keep things interesting, yet it doesn't fly out of control. Definite cigar for Jack Douglas as the production is first rate. There is an adventurous aspect here that they wouldn't ever come close to approaching again.

Posted by Sean Coleman at 1:00 AM No comments: Links to this post Cruelly reduced to a punch line by an SNL skit, here is a band that has received very little recognition despite a solid body of work. Striking gold in the summer of '76 with "(Don't Fear) the Reaper", Blue Oyster Cult gained extra momentum as a first rate touring act, though this good fortune would not survive the early 80's.

"Cultosaurus Erectus" catches them in a tricky period which saw their original style morphing into something much heavier. Producer Martin Birch, who had just finished Sabbath's "Heaven and Hell", helped guide them in this direction and brought a fresh approach to their quirky sound.

Sonically, this is an incredibly pristine record, with particular emphasis on the rhythm section in the mix.

The biggest payoff was bringing out guitarist Don "Buck Dharma" Roeser's inner gunslinger in the studio. One of the most underrated players in rock, he has plenty of room to shred throughout. "Black Blade" opens strong and hits hard with a twisted lyric by science fiction writer Michael Moorcock. (Tell me that you wouldn't dream up a demon-possessed, blood thirsty sword to take out everyone that made fun of your last name)

Massive walls of guitars blast out a huge riff in the bizarre, multi part "Monsters", which features seriously weird excursions into acid jazz. This track crystallizes all of the elements that made these guys great, yet doomed them in the accessibility sweepstakes. Stand out tune that must be heard to be believed.

Eccentricities in arrangement and lyrical themes are part of BOC's charm.

Songs involving strange phenomena ("Unknown Tongue") mix with shaggy dog tales ("The Marshall Plan") about a kid whose girl ditches him at a concert to chase the band. He exacts revenge by becoming a rock 'n' roll guitar god, whose blistering lead work supports inside jokes flying like beer bottles at a dive bar near closing time. Definite highlight.

Has anyone ever seen Eric Bloom and Jeff Lynne together in public?

Recovering from an identity crisis on "Mirrors" that had them veering onto the same path (at times) as The Cars, this album was a return to form, worthy of repeated spins to catch what might have slipped by the first few times.
Posted by Sean Coleman at 2:46 PM No comments: Links to this post