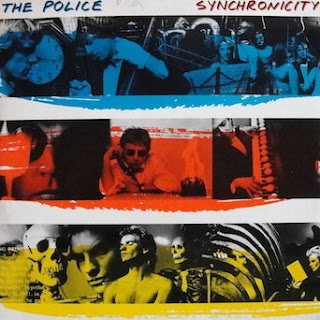 The last recorded statement from this legendary trio manages to be exciting, dark, jarring, clever and accessible all at once. Neatly avoiding the aural traps that would forever freeze their contemporaries in time, Synchronicity plays as fresh today as it did upon its release. Far from radiating mindless good cheer, the subject matter ponders extinction, spiritual decay, betrayal and relationships in turmoil. All was expertly woven together by the principal author of this intriguing song cycle. Copeland and Summers each chipped in with one of their own compositions, supporting Sting's endeavors with their usual imaginative, impeccable instrumental magic.

Cigar to Hugh Padgham for a pristine production job. Listening now to my vinyl copy in awe.

Austerity in arrangement is the key to the joyous aural experience, allowing every snare hit, bass line and guitar figure to punch through spectacularly in the mix. The virtuosity of all three musicians is slightly muted in favor of subtlety. Copeland is most notably reserved on the second side of the disc, keeping time and adding flourishes where required. He is not filling every empty space with dexterous high-hat work or flying across the kit, yet when he does break out (the outro of "O My God", the entirety of Synchronicities I and II) it is electrifying. Summers puts on a masterclass in tasteful, atmospheric coloring, leaving no blemish on any track. The sounds that he coaxes from his guitar and accompanying effects deployed are always in service of the song. Special mention goes to the dazzling set of runs that he rolls across "Synchronicity II". He also raises the ghost of Plastic Ono Band with "Mother", which is bizarre and a step ahead of its time. The Mother Complex in waltz time, complete with primal screaming, also fits into the Jungian concepts that inform much of this LP, albeit unintentionally.

Without question, this is pretty much a Gordon Sumner showcase. His mindset going into the writing process was not a happy one. His marriage was on the rocks and relations with his bandmates were fractious, at best. All parties have expressed their opinions on the difficulties that clouded the sessions. For Sting, his creative outlet became a source of healing. Four singles hit commercial paydirt upon release, though by far the most successful was the "tune that shall not be named". It is subversive in tone, possessing dark undercurrents that are not the norm for a worldwide, number one smash hit. Deserving of all acclaim, its power lies in a direct simplicity that is difficult to achieve in songcraft.

Every cake you bake, every leg you break

There is a palpable tension that builds through side one of Synchronicity. Listeners are treated to abrupt, 180 degree turns as the change-ups are relentless, much to the credit of all involved in sequencing. The rush of images and aggressive playing of the opener dissolves into tribal, world beat ("Walking in Your Footsteps") and a sobering message about the fragility of existence. That paranoia creeps into "Miss Gradenko" which playfully examines forbidden love under the guise of a totalitarian regime and a feeling of impending disaster is what makes "Syncronicty II" so compelling even as of this writing. Long shadows are cast, though the melodies are brilliant. Sting's bassmanship is particularly sharp with sparkling lines underpinning both "O My God" and the aforementioned "Miss Gradenko". Side two provides a break from the claustrophobia-inducing tone that pervades the beginning of the set. Though the material is less experimental, it is minor-key morose in nature. Beautifully executed, "King of Pain" and "Wrapped Around Your Finger" manage to transcend the root core of hurt/betrayal that inspired both cuts. They are nothing less than triumphant highlights in a stacked deck. The moody closer ("Tea in the Sahara") ends on an anticlimactic, dour note. With an enchanting storyline that took a cue from The Sheltering Sky, the image of the beguiled sisters burning under the desert sun with nothing more than broken promises and cups filled with sand is grim.

This ambitious and smart offering is timeless, succeeding on every level. The men who created it were aware enough to know that they would not be able to carry on as they were. Sting had the vision, though it was unfair to assume that the massive talents of Summers and Copeland could be sublimated, relegating them to silent session players. To their credit as a team, they moved away from the reggae-fied sound that brought them to prominence and continued to stretch creatively. Synchronicity stands as their finest work and a fitting swansong for a group that accomplished a lot in a very short window of time.
Posted by Sean Coleman at 5:17 PM