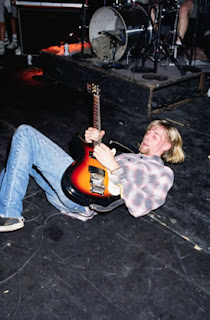 Have you ever dropped a ton of bricks on a carton of eggs? Swung a ball peen hammer at a rice-paper wall?

This is the impact that Kurt Cobain, Krist Novoselic and Dave Grohl had on the soporific musical landscape of 1991.

If you did happen to be alive and have functional ears at this time, here's a little reminder of some of the shit that clogged the charts:

Bryan Adams (Everything I Do) I Do It For You
Color Me Badd I Wanna Sex You Up
C+C Music Factory Gonna Make You Sweat (Everybody Dance Now)
Paula Abdul Rush Rush
Timmy T One More Try
EMF Unbelievable
Extreme More Than Words
Hi-Five I Like The Way (The Kissing Game)
Surface The First Time
Amy Grant Baby, Baby
Boyz II Men Motownphilly
Stevie B Because I Love You (The Postman Song)
Mariah Carey Someday
Bette Midler From A Distance
Whitney Houston All The Man That I Need
Jesus Jones Right Here, Right Now
Color Me Badd I Adore Mi Amor
Janet Jackson Love Will Never Do (Without You)
Marky Mark and The Funky Bunch feat. Loleatta Holloway Good Vibrations
Madonna Justify My Love

All apologies to Charles Dickens.

Without wading into a quagmire of editorializing around Cobain's exit from this dimension and the brief explosion that many of us are still aware of at the 20 year mark of his aforementioned acceptance into the choir invisible, there are some important items to ponder, namely:

1) In fusing the Beatles with Black Sabbath, he created a very intoxicating hybrid for folks that enjoyed melody intertwined with an anvil being dropped on their skulls.

2) Hearing "Smells Like Teen Spirit" in 1991 did something for me (and countless others) that no other contemporary noise had done for ages: It gave me goosebumps and I wanted to hear more.

3) The raw, screaming visceral attack of this music also carried a careful plan along with its subversion. The guy behind it was a hell of a lot deeper than most would suspect.

4) Few knew at the time that it would all end in spectacularly macabre fashion.

I remember where I was and who informed me of Cobain's death back in the spring of '94.

Being roughly the same age as him, I felt that this was a missed opportunity. He could have done much more and taken his vision/music in an interesting direction. More importantly, rather than feeling envious of those who had experienced the golden era of musical creativity first hand(the sixties), there was hope that something relevant, vibrant and exciting could happen in our time as well.

A bright comet attracts much attention before flaming out.

On a positive note, he left some exceptional material for listeners to take up and draw inspiration from, though it's always tough to think about what may have been.

Posted by Sean Coleman at 12:13 AM No comments: Links to this post 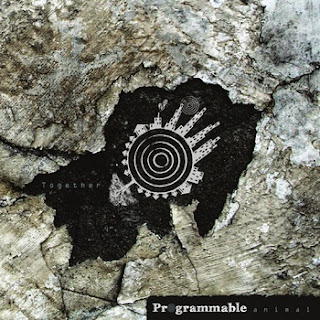 Brand new EP release by Chicago based band, Programmable Animal. This is a taster in advance of the full length disc that they plan to unleash this summer. It is quite an adventurous, five track odyssey to embark on as a listener and one for which you must be prepared to commit. While the interplay amongst the instruments in the mix trades on ambient, "found" sounds, the six piece ensemble keeps the aural sands shifting throughout. Embracing the frenetic, double-bass drum attack of metal on one hand, the tunes also turn on a dime to allow a wash of synth-driven textures to take over the space between your headphones. Production values are high with a dark mood pervading the arrangements. At times the vocals are purposely wrapped in gauze only to break free at critical moments in startling fashion. All parts are extremely well thought out, while the technical aspects of the performances are first rate.

Warning: This is not a soundtrack for the morning, nor should it be approached in a casual manner. Rather, it demands serious listening as purple twilight gives way to night time. Introspection mixes with raw emotion, yielding plenty of great turnarounds and sonic rewards when you drill down to listen with a generous ear.

Highlights are "Together", "Dark" and the epic closer, "Fall Eye".

Pretty cool spin. Get it for yourself here

Find out more about Programmable Animal

Join them on Facebook and stay tuned for new music! 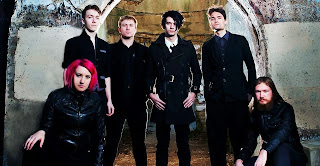 Posted by Sean Coleman at 11:45 PM No comments: Links to this post