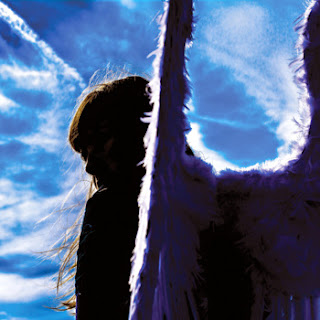 Recording software has made an enormous impact on contemporary music production. Through the manipulation of noises as expressed in ones and zeroes, there is much opportunity to "fix" performance. The result? Homogenous product, with voices and instrumental touches virtually indistinguishable from one another. In many instances, this intervention is absolutely necessary as the "talent" just isn't there. Instead of using available technical resources to enhance the material, laptop engineers now sublimate it.

Would you smother a gourmet meal in ketchup?

Growing dissatisfied with such trends, many artists are approaching the recording process from another angle. The warmth of analog is felt in every note in the new EP from DRLNG. Committing all four songs on Icarus to tape, a lush soundscape is created that is dependant upon precision playing, strong melody and the dulcet tones of lead singer Eliza Brown. The quartet is rounded out by Martin Newman (guitars), James Newman(bass) and Mickey Vershbow (drums). The material is thoughtful and well crafted, with the highlight (for me) being the title track.

Full marks go to all involved here, especially in terms of how they have carefully chosen to put the songs first and not succumb to layering and tracking to the point where the music loses all personality. The band have issued Icarus as a limited edition vinyl release (300 copies pressed) in addition to downloadable format. In truth, this recording is tailor made for your turntable, as it would best allow listeners to appreciate how these arrangements breathe outside of the confines of digital mastering.

I look forward to hearing a full length release from DRLNG, though in the meantime you can purchase the Icaras EP right here. Be sure to add this to your collection.

True talent isn't always recognized by the masses. Ingenuity shouldn't toil in the long shadow of mediocrity, though this is reality for those who cut an individual path. With that in mind, the spotlight searches out (and locates) Mr. Brian Hines, who is better known by his adopted stage name, Denny Laine.

As a founding member of the Moody Blues, he first came to prominence singing lead on a tune that was previously recorded by Bessie Banks called "Go Now". He left the group in 1966. Most rock fans saw this multi-talented soul return to the spotlight when Paul McCartney asked him to join Wings in 1971, where he would remain until their dissolution in 1981.

While his term with Wings was indeed high profile, the material that he had recorded in the interregnum between leaving the Moodies and accepting McCartney's offer has largely gone unnoticed.

Laine formed the Electric String Band in late 1966, which included Trevor Burton (formerly of The Move) and drummer Viv Prince. Four classical players, Wilhelm Martin (violin), John Stein (violin), Clive Gillinson (cello) and Chris Van Campen (cello), were recruited to achieve his vision. Utilizing strings to play live, he also forged a sound that would be picked up in earnest by ELO when they formed out of the remnants of The Move in the early seventies. Though mainstream success eluded them in their short time as a functioning unit, they did manage to commit material to tape that was released in the form of two singles. 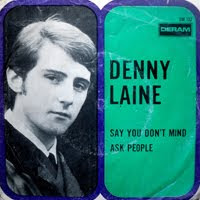 "Say You Don't Mind" was the first and it is extremely fine. Denny performed the song on early Wings tours, though you can hear the original 45 right here. As a record, it is definitely bathed in the psychedelic production values of 1967, though the tune is pretty strong. Laine's vocal is immaculate and the chord progression has some very intricate twists. John Paul Jones handled the string arrangement.

Curiously, there is more locked in the vaults from this timeframe. Produced by Denny Cordell, "Why Did You Come" was slated to be the third single but never saw the light of day. Thanks to their appearance on John Peel's radio program in October of '67, you can now have a listen. Similarly, another lost composition ("Guilty Mind") is presented from the same show. For those who are not acquainted with this phase in Laine's career, it would be a revelation to see these tracks re-mastered and brought into the 21st century marketplace. Better still if there were more quality gems from these sessions in the can, waiting to be dusted off and properly issued.

Opportunities missed, Electric String Band had a series of lineup changes before passing into the mists of time, with Laine disbanding them for good in February 1968.

While he is still plying his trade, recording and gigging, it is a shame that many more listeners haven't been exposed to his music. Deservedly, he should be recognized for his pioneering work from the late sixties.

For more on the artist, check this out
Posted by Sean Coleman at 11:11 PM No comments: Links to this post