NOT TO BE TAKEN AWAY 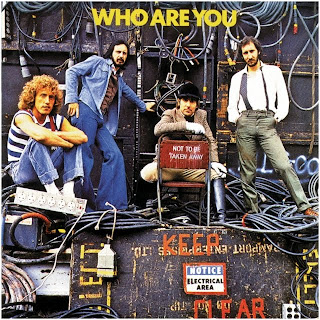 In the interregnum between The Who By Numbers and the release of Who Are You, popular music trended toward lightweight, inconsequential fare programmed for the dance floor. With disco hijacking much of the precious needle-time that radio programmers had to spare, "Rock" began to morph into a soft shadow of its former self, complete with a complacent spare tire around the middle and nothing new on offer.

Safe, corporate-sponsored sludge coated the airwaves, though there was a movement in music that began to bubble up between the cracks that brought a different type of energy to the table.

Bashing away on their instruments, howling, cursing and spitting in the face of the mainstream, the messages of punk ranged from being overtly political in nature to downright blackly humorous and vulgar. Raw, sweaty and primitive rock 'n' roll was back, with a do-it-yourself attitude that excluded no one. These snotty young upstarts didn't give a fuck and had nothing to lose.

This made quite an impression on Pete Townshend.

In my imagination, I invented punk rock a thousand times...I'm sure that I invented it, yet it has left me behind. If anything was ever a refutation of time, my constant self-inflicted adolescence must be...I prayed for it, and yet it's too late for me to truly participate. I feel like an engineer. Just let me...watch.

Who Are You (the LP) had absolutely nothing to do with punk, though the arrival of this wonderful noise served to free Pete from his obsession with having to single-handedly, fly the flag of rock and roll. Seeing that these kids were more than just alright, Townshend looked to them to deliver the angst and explosions from stage. Something different was in order for The Who. His demo work in preparation for the sessions took up the synthesizer experiments that he had been working with during the early 70s. New ideas in hand, it was time to pull his band mates together to work them out in the studio.

One small detail remained: Townshend was not up for playing live or touring around this project. Annoyed, Roger and John were not on board with this. The fourth member in this equation could not have possibly hit the road in the shape that he was in. Since their last tour had ended in the fall of '76, Keith had fallen into a very ugly spiral of drink and substance abuse. Directionless without any group activity, his bad behavior continued unchecked. Not surprisingly, this took a heavy toll on his health and skills as a musician.

Reconvening after a long layoff, the challenge ahead was to tackle the new material. Stylistically, these compositions were miles away from what had come before. Tricky time signatures, jazz-like chord progressions and layered arrangements would amount to the most "Un-Who like" record they had ever made.

"New Song" announces the change in the works immediately. Message-wise, Pete reminds listeners of why he is shuffling the deck:

Dismissing out of hand the robotic thump so ubiquitous at that time, "Sister Disco" is saved by an inventive arrangement and Entwistle's lightning quick fingers. John contributes three of the nine tunes found here, going the extra mile with his performance on 8 string bass for "Trick of the Light", which is so forceful that it almost precludes the inclusion of another guitar. Both he and Townshend were featured on bass when they performed it live on the '79 tour, prefiguring (perhaps the inspiration for) Spinal Tap's jokey "Big Bottom".

Roger really takes hold of these songs, putting a snarly edge on the Gilbert and Sullivanesque "Guitar and Pen". His passionate delivery on "Music Must Change" also further elevates the piece, decorated by Townshend's jazz fingering. Moon could not get his head around the 6/8 time required here and his performance was excised from the final mix. Struggling to regain his touch, Keith was a shadow of his former self behind the kit. Glyn Johns struggled with this, at one point removing all of the drummer's cymbals so that he would not saturate the takes by riding them constantly. In the final stages, it was clear that Moon would soon be dropped from the band as he simply could not function. Tensions were high between Johns and Daltrey as the producer tried to push the singer toward a different way of phrasing. Glyn left the completion of the project in the hands of his assistant, Jon Astley, claiming a work commitment with Joan Armatrading. It was very likely that the atmosphere during the sessions left a bad taste.

Conceding to those fans that yearned for the expected from the Who, "Who Are You" closes with six minutes of the old "strum and drang". The lyric was derived from an infamous encounter that Pete had with Steve Jones and Paul Cook of the Sex Pistols. Mistaking one of them for Johnny Rotten, he cornered them, ranting about the state of music, drunk on only a couple of shots of whiskey. Having just come out of the last round of legal proceedings against the Who's former managers with a very sizable royalty cheque in his pocket, he ripped it up and spat upon it during his tirade. Exiting the bar, he slumped in a nearby doorway and passed out. Rudely prodded awake by a policeman's baton, Townshend was given the option to get up and stumble home to bed or be brought to jail.

Who Are You was well received, though its merits were overshadowed by the death of Keith Moon just weeks after it had hit the shelves. This is where the Who legend ends for me. He was their resident pranskster, heart and soul and percussive genius who powered the band's music with a style unlike anyone before him. Seemingly indestructible, he burned very brightly for a short time before flaming out.

Following his passing, they soldiered on for a few more years, though they lacked the unpredictable energy that he brought. In short, they were more of a pop band which the post-Moon efforts (Face Dances and It's Hard) bear out upon repeated spins.

Numerous farewell and "hello again!" tours have been undertaken over the last thirty years, much to the detriment of their legacy. Despite this, it is their output from the 60s and 70s which continues to win new converts.
Posted by Sean Coleman at 6:22 PM 1 comment: Links to this post 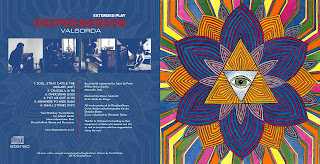 Keeping the flames from the hard rock temple, UK based DeepSeaGreen are unleashing Valsorda, an EP that features six weighty slabs of uncompromisingly heavy, original music. Coming just over a year after their self-titled debut, the band put down these tracks over a few days in Northern Italy in March 2011. Translating the excitement of live playing in a studio environment is generally a tall order, though they pull it off successfully with electricity crackling from every pore of the disc.

Brothers Jon and Daniel Jefford with Trent Halliday and Marco Menestrina have been honing their chops since 2008. Tight and precise, they steer each of these blues/rock workouts expertly, at times shifting gears in the manner of early Sabbath.

Highlights are "Soul, Stray Cats and the Cosmos" which boasts fantastic, multi-part riffs and the groovy closer, "Small Stones", though everything they do here is more than engaging. The key is that they have taken a refreshing approach to recording, which is to simply plug in, set up and put the songs across. Having taken the time to plan the arrangements and rehearse beforehand, they hit the studio floor running, capturing the energy in every take.

Good things come to those who rock.

Vaslorda is as close to fine as it gets. Check it out for yourself here

Posted by Sean Coleman at 10:36 PM No comments: Links to this post

TRISTAN CLOPET-A CHAT WITH MY BRAIN

Tristan Clopet has just released "A Chat With My Brain", a taster single from his first full length disc (Name It What You Want) due out on May 31st.

Setting the bar quite high, this killer track combines a powerful hook with high-flying vocals, all masterfully blended by producer Raymond Richards.

Crank it up and pass it on!
Posted by Sean Coleman at 8:05 PM No comments: Links to this post