THE WHO LIVE AT THE FILLMORE EAST 1968 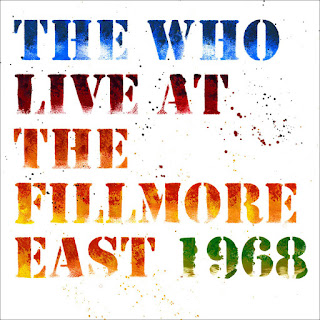 Long in circulation as a bootleg recording, the audio document of The Who laying waste to the stage of the Fillmore East in April 1968 caught the quartet in excellent form and fidelity. Tight from months of road work, their sets were no less than beautifully executed sonic assaults on the lucky crowds in attendance. Lauded as one of the greatest live rock bands of any era, the illicit issue of this material in the mid 70s only served to solidify such opinions.

This single, black market disc was duly redistributed over time in various formats, yet only told part of the story.

The April 5th and 6th shows were taped in their entirety, though the capture of the first night was botched and unsalvageable. Barring technical issues that obliterated large parts of "Substitute" and "Pictures of Lily", the second attempt was magic. The unofficial version that originally leaked out to collectors is truncated, however. "Relax" and "My Generation" both fade out prematurely, while the beginning of "A Quick One" is also unceremoniously cut, picking up the action with the "Ivor" sequence.

Tasked with dusting off the original four-track tapes and utilizing 21st century technology to mix them for proper release, they did a fantastic job. The performances are incandescent, showing a powerhouse band in a crucial phase of transition. Maximum R & B was abandoned at the side of their touring highway, growing smaller in the rearview mirror as the unique songwriting vision of Pete Townshend coalesced. Reconciling studio arrangements with the precision attack that the instrumentalists brought to their live work, the results remain astonishing a half century on.

In the initial rush of what came to be known as the "British Invasion" in the early sixties, groups would generally have a half hour turn on stage after their opening acts. Front of house sound was treated as an afterthought as amplification was limited to what the players themselves had onstage. Vocals were run through columns that pointed toward the audience, monitors were non-existent and the brief was to turn up, play aggressively and shout to be heard over the crowd. This worked out fine for small clubs, though the ability to project the music to larger venues filled with screamers wasn't possible at that time. Bill Graham was one of the early champions of giving artists a proper platform to deliver their message. He viewed rock concerts as theatrical performances, thus the musicians he promoted were equipped with the best sound and lights available. Having hit on a winning formula in San Francisco with the Fillmore, he gambled on renovating an abandoned movie theater in New York City in 1965 and the Fillmore East showcased some of the greatest bands of that era.

Are we there yet?

The Who had made their US debut roughly a year before, playing short sets in front of rotating crowds as part of a package gig (promoted by DJ Murray the K) in New York with Cream and a few other notable acts. Set length was 15 minutes. Constant touring followed with an appearance at the Monterey Pop Festival in June helping to raise their profile in the States. Between gigs they had to squeeze in session time to complete their inventive concept LP The Who Sell Out which was released at year end.

Having put hundreds of hours into their craft, the beast that was Townshend, Daltrey, Entwistle and Moon now stretched their show well beyond a perfunctory turn of 30 minutes. The concept of extended jams were coming into vogue and "stacks" replaced the lone amplifier that hitherto had been the only source of noise for guitarists/bassists. The revolution of signal phase distortion raised the game, giving birth to ROCK and a genuinely mind-bending experience for concert goers.

"My Generation" swallows two full sides here, clocking in at 33 minutes. Kicking off with the stop/start motif, Entwistle solo bursts and key signature change toward the chaos that closes the studio recording, they take an abrupt detour into improvisational madness. The lads throw up a compelling wall of noise: Moon flailing around his kit as Townshend coaxes an array of sounds from his axe, while Entwistle solos as much as his counterpart on the four-string. They lose each other in the sonic hedge maze at times, though the germs of themes that would be integral to Tommy show up as they bomb the faithful back to the Stone Age with sheer intensity. The casual fan may only take one pass through this, yet it reveals them to be far heavier than their records belied up to that point in time. Similarly, "Relax" is a revelation extended out to nearly 12 minutes of psychedelic bliss, with a quick shot of "Day Tripper" thrown in for fun. Never in solidarity with the hippy bands that came out of California during this era, the Who made an exception in their approach with this deep cut from Sell Out. Special mention goes to their take on "A Quick One (While He's Away)". It weighs in as the third longest piece from the Fillmore gigs and was a genuine surprise. The ending still grants forgiveness to all but goes on for quite some time in the outro as Entwistle gives a mini-master class on how to work every inch of the fret-board. It is different from the arrangements they did at Leeds, on the BBC, Monterey Pop and even the superb take from the Rock and Roll Circus film.

There once was a note, LISTEN!

Pretty much everything etched into the grooves is a highlight reel. You get a spotless version of "Tattoo" and Townshend's offering to the American Cancer Society, "Little Billy", which went unused until it was pulled from mothballs for Odds and Sods in 1974. The scattershot drum pattern of "Happy Jack" hits a home run as does "I'm a Boy". The caffeinated, "run and gun" Eddie Cochran covers ("Summertime Blues", "C'mon Everybody") along with a few other selections from the vaults ("Fortune Teller", "Shakin' All Over") would remain in their set lists for another couple of years.

Switching to a gear that was hitherto unknown for them, the transitory period of their stage show from 1967 to 1970 wasn't well documented. This slab of brilliance fills in the gap, showing the pre-Tommy Who to be already one of the best in the business. An exciting release, Live at the Fillmore East 1968 is highly recommended. Best appreciated in vinyl format.
Posted by Sean Coleman at 5:06 PM No comments: Links to this post