Great cover of the Syd Barrett song "Opel" by Joseph Bridge. He is ably assisted by Keith Scott (Bryan Adams' guitarist) whose tasteful fretwork will also grace Bridge's upcoming full length release, "Marvin's Sanitarium", which is due out later this year.

Posted by Sean Coleman at 3:43 PM No comments: Links to this post 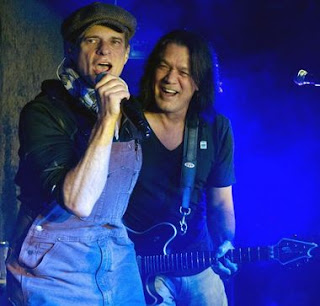 TATTOO was officially released today and as a big fan of David Lee Roth era VH, I say crack a can of Bud and enjoy the shit out of this. Their first full length disc with Roth since 1984 ("A Different Kind of Truth") will be released on Feb 7th.

Posted by Sean Coleman at 6:23 PM No comments: Links to this post

Simply one of the most accomplished guitarists of all time, Lenny Breau developed a technique that few have been able to fathom. In his hands, the instrument sounded like four people playing simultaneously with bass, rhythm and lead work executed by each finger on his picking hand.

Musicians speak of Breau in tones reserved for deities, with some of the acknowledged masters stepping back in awe of his abilities.

Yet, he remains criminally underappreciated.

This record is one of the very few that were released during his lifetime. Caught in the act at Shelley's Manne-Hole, 1969, Breau's set is a stunning exercise in live jazz guitar backed by Ron Halldorson on bass and Reg Kellin on drums. Find this album or CD and you'll be giving yourself a gift that will leave your jaw on the floor in amazement with every spin.

Breau was killed in the summer of 1984, the victim of a murder that remains unsolved. Sad end for someone so prodigiously talented.

Posted by Sean Coleman at 8:30 PM No comments: Links to this post