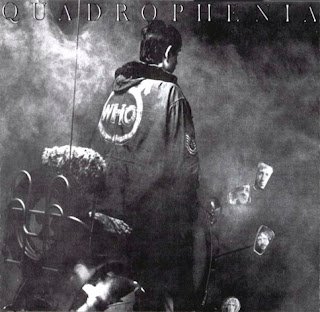 Peter Townshend, rock's most tireless supporter, had long been telling anyone within earshot that the music had to continuously evolve and challenge listeners. By 1973, there were a number of ambitious projects undertaken by artists of that era, though he walked the talk in delivering this two disc masterwork.

Quadrophenia is without equal in the entire Who catalog.

Consistent in its excitement factor, the music burns with incredible intensity ("The Real Me", "The Punk and the Godfather" "5:15", "Drowned"). The backdrop to Townshend's subject matter (the Mod movement) isn't exactly universal, though the emotions evoked by each piece certainly are. Far more successful than Tommy in framing a linear storyline which has a proper resolution, Quadrophenia also manages to retain an element of open-ended wonder with respect to its protagonist's future.

Claiming that he did most of the guitar work late at night, while "pissed out of his brain", Pete nonetheless complimented his tunes with top-notch lines. Roger turned in a number of heartfelt vocal performances that are right on target, Entwistle wrote out and dubbed on over 50 horn parts while contributing absolutely jaw-dropping basslines and Keith was in great form, though not quite his usual exceptional self. Moon's substance abuse had begun to erode his prodigious skills around this time. Publicly, he seemed to be indestructible, but his antics masked some very deep seated problems that would soon turn into very real headaches for the band and its management.

Ultimately, the theme involving Jimmy being a "Mod" is transcended by the fact that he is a misfit, who is gripped by the same self doubt and insecurity that extends its shadow over every human being at one time or another. Through the course of the album, his character is at odds with his parents, mates, co-workers and girlfriend. He goes to Brighton, a Who concert, battles rockers, scores pills, seeks and loses women, gets a job and loses that and contemplates the past, suicide and finally has the epiphany (through the employment of that trusty, age-old literary device: the cleansing power of water) that he will carry on.

This, of course, is mightily condensing the mad rush of images that are conveyed by the songs presented here. The prospective listener has to take up the liner notes, immerse themselves in the plot and find their own signposts to guide them.

Your engagement and full attention are required. What you will glean from the grooves of this disc is entirely subjective. For me, the music itself remains as the key driver to pulling a rush of different emotions to the surface whenever I play this record. There is a degree of solipsism involved in that last statement that could take this essay in a very dangerous direction. "Is It In My Head?" indeed. Suffice to say that Jimmy's inner struggles are expressed through a series of events that make perfect sense to him. Left unchecked, this character's behavior could have been written to take a mental trajectory that would be tough for anyone to follow. Townshend chose a path for Jimmy that was far easier to digest. Feeling misunderstood or out of sync with other human beings is something that many can relate to and it is by virtue of this fact that Quadrophenia escapes the gravity of inscrutability.

Townshend worked to ensure that the four shades of Jimmy Cooper were assigned to each band member, though no real room is created for them to take up different roles, the exception being Keith's vocal turn in "Bell Boy".

So you have the following:

"The music is the best music that I've ever written, I think, and it's the best album that I will ever write."

No argument with that here.

If you have never encountered this record before now, here is a song by song synopsis of the story taken from an online post:

* "I Am the Sea/The Real Me" – The opera opens with Jimmy Cooper's introduction with his four personalities. The listener then gets a quick look at his visits to a psychiatrist, his mother and even the local vicar. Mental security is unfortunately not obtained by the protagonist.
* "Quadrophenia/Cut My Hair" – Jimmy recalls an argument with his parents that culminated in his leaving home. We also hear a news broadcast mentioning riots in Brighton between the Mods and the Rockers, events at which he was present the previous week.
* "The Punk and the Godfather" – Jimmy goes to a rock concert (Supposedly The Who themselves). He queues up, pays his money and then decides he is going to see the band backstage as they come out the stage door. Sadly, the group is rude to him. He realises that there is nothing really happening in rock and roll; it is just another thing in his life that has let him down.
* "I'm One" – Jimmy contemplates how he has not really got much going for him, but at least he has the Mod lifestyle.
* "The Dirty Jobs" – Suitably disenchanted with his former "religion", he gets a job as a dustman. Unfortunately, his extremely left-wing views are not appreciated by his workmates and he is forced to pass on to greater things.
* "Helpless Dancer/Is It in My Head?" – The listener gets a real look at where Jimmy's aggression comes from, as he switches into one of his multiple personalities (The Tough Guy). Jimmy has a conscience that bites fairly deep. His frustration with the world only makes him angrier than he already is. The listener sees that he also possesses self-doubt; he worries about his own part, and feels that his outlook is clouded by pessimism.
* "I've Had Enough" – Jimmy finally snaps when he sees the girl he likes with one of his friends. In a desperately self-destructive state, he smashes up his scooter and decides to go to Brighton where he had such a good time with his friends chasing Rockers the week before (as recited through the news broadcast earlier in the story).
* "5.15" – This song recites Jimmy's train journey down to Brighton, sandwiched between two city gents and notable for the rather absurd number of amphetamines he consumes in order to pass the time. He goes through a not entirely pleasant series of ups and downs as he contemplates the gaudier side of life as a teenager.
* "Sea and Sand/Drowned" – Arriving at Brighton, Jimmy's mood heightens. He talks about the rows at home and is a little sarcastic as he recalls the evening on the beach with his former girlfriend. The Mod scene is already falling apart and all he can do is stay in Brighton just to remember the days when the Mods came to Brighton; it was only three weeks ago, but he is already living in the past. It is here that Jimmy contemplates killing himself by drowning in the water.
* "Bell Boy" – He meets a former Ace Face who now holds the position as a bell boy at the very hotel the Mods tore up. He looks on Jimmy with a mixture of pity and contempt. The two argue, as Jimmy feels the Ace Face has "sold out". Jimmy is now feeling that everything—even the Mod lifestyle—has let him down.
* "Doctor Jimmy" – Jimmy begins to damage himself so badly on drugs and alcohol that he gets to the point where he is so desperate that he will take a closer look at himself. This part of the story shows the lunatic within him. The chorus line "Doctor Jimmy and Mr. Jim" is an ambiguous reference to "Doctor Jekyll and Mr. Hyde", which closely links to the multiple personality theme running through the story.
* "The Rock/Love, Reign O'er Me" – Jimmy steals a boat and takes it to a rock in the middle of the sea. Here, when he comes down off his high, he finds the boat has drifted away and that he is now stranded, alone and forgotten. As a storm rages around him, Jimmy has an epiphany. After all the different people he has been, he finally knows for sure who he is: himself.

Taking the album to the stage proved to be difficult. The Who failed to gel on the tour to support Quadrophenia, with considerable technical obstacles that presented themselves from the first dates. It would also be the last truly classic Who effort of the 1970s.
Posted by Sean Coleman at 10:58 PM 1 comment: Links to this post