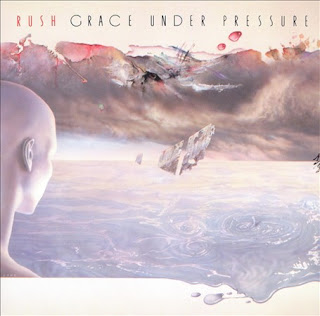 Rush have the distinction of being one of those bands that draw extreme reactions at the mere mention of their name. Plenty of love has been directed their way by musicians, which is no surprise as all three group members are virtuosos on their respective instruments. Others wince upon hearing Geddy Lee’s vocals and have little time for musical complexity, perfectly content with 4/4 time and love me/love my dog lyrical subject matter.

Even for those who do enjoy the output of this venerated trio, opinions differ over the ambitious creative avenues that they have traveled during a recording career that is (as of 2013) closing in on 40 years. 1984 would be prove to be transitional.

When Geddy, Alex and Neil set to work on what would become Grace Under Pressure, one member of the team would not be joining them: Terry Brown. As it is with many partnerships, each side had vastly different ideas about what they wanted to achieve going forward. Brown openly disliked some of the material on Signals and the group was generally unhappy with the sonic results of that disc.

So they sat down and had "the talk", parting ways after a decade long association.

Unceremoniously ditched by the "new guy" that they had chosen to direct these sessions, the band hit Le Studio and took up production duties on their own with assistance from Peter Henderson.

Their rhythmic "bromance" with The Police continues here. First evidence came with the reggae stumble that they dropped into the middle of "The Spirit of the Radio" back in 1980. Sting, Stewart and Andy would show up frequently in the mix from here on in ("Vital Signs", "New World Man") though this admiration comes to full stylistic fruition on Grace Under Pressure. More about that later.

Why should I care/If I have to cut my hair?/I have to move with the fashion or be outcast

Submitting to the double-edged shears of early eighties coiffure, the lads were now sporting fashionable new lids. Hell, Neil's moustache used to take over the drum solo for him in the 70s when he needed a break. That was now part of the past, along with multi-part, long form pieces. Short hair, shorter songs. 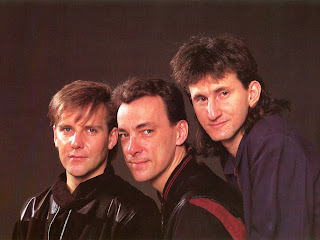 And what of the new material?

Peart's lyrics range from being topical ("Distant Early Warning") to touching ("Afterimage"), harrowing ("Red Sector A") funny/paranoid ("Red Lenses") with a dollop of grim futuristic vision thrown in ("The Body Electric"). Arrangements are sharp, though the synthesizer noises are redolent of the time period. Rescue from Roland comes with exquisite playing that underpins every cut. Despite the frosting, this is still fucking Rush. Tight grooves with fine melodies are favored over extended flights of fancy. Muscular ska powers "The Enemy Within", which is where we pick up that conversational marker involving Police influences. Interesting parallels can be drawn between the two. Both trios feature a bassist/lead singer who sang in a distinctive upper range. Each boasted a flashy rhythm section whose skills slightly overshadowed the guitarist. As stage acts, both were unbeatable. Rush paid close attention to the Police model in editing their material, with "Between the Wheels" flying the synth sounds in from "Spirits in the Material World" and the deployment of heavy chorus effect on the guitar in the style of Andy Summers.

They do retain their identity while incorporating these aspects into the writing.

Pure excitement happens in the exploding chorus of "Distant Early Warning" where everyone gets to put their chops on display as they break free from the straight jacketed verses. Lifeson's solo is a model of taste and restraint, which renders endless six string wanking obsolete in one brilliant passage. You could frame those notes! Similar fun happens in the mid-section of "The Body Electric" as those ones and zeros coalesce into pure human passion. Neil and Geddy effortlessly shift gears into a funky time signature, leaving Alex to his own devices. His leads are much more prominent than they were on Signals, stealing back some of the space taken up by the synths. Tightly edited, well written-this disc is quite likeable.

How did you take in this set for the first time?

Thank you for asking, italicized text. You (and the depth of your slightly-leaning-to-the-right questions) never let me down. Spring of 1984: Loaned my cassette copy of Judas Priest's Defenders of the Faith to a buddy in exchange for Grace Under Pressure. That weekend, I was left at home alone with the cutlery, smoked a bit and listened to the new stuff intently. Fell asleep with this album in headphones on consecutive nights. Loved what I heard then and still do.

This is your brain on Rush

Ultimately, the new sounds met with their share of detractors. Some fans simply didn't get it. Without blinking, these guys realized, early on, that survival meant changing the game plan. After their debut, Zeppelinisms were discarded as it could neither sustain them creatively nor provide listeners with anything unique. Instead of going the safe route, Rush reached a bit higher. Would they occasionally trip in doing so? For sure, though they would have been playing "In the Mood" in bars forever had they not taken the opportunity to broaden their horizons. Grace Under Pressure was yet another bold move forward. 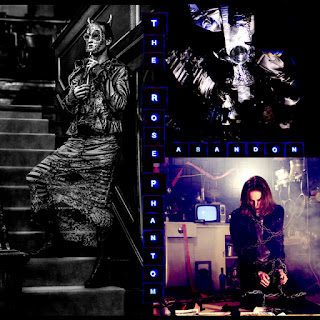 Taking a cue from the New Romantic movement of the early 80s, The Rose Phantom has released an incredibly well produced set of strong, melodic songs. Understanding that synthetic backdrops can only succeed if the listener has a hook to hang their proverbial hats on, each selection is carefully arranged for maximum sonic impact. Mining ground similar to that of early Gary Numan, Tears for Fears and Depeche Mode, technology is nicely bevelled with raw human emotion. It must be stressed that only the positive characteristics of the aforementioned artists are present, with themes and lyrical subject matter belonging solely to the artist.

Epic soundscapes underpin every cut on Abandon. Great care is taken to ensure that individual instruments have a definitive presence in the mix, with every note placed perfectly. The vocals are not buried in pitch correction software, but instead are allowed to breathe, which is a plus for a contemporary recording. It is an expressive voice that is on display here, lending power to every track. Highlights abound: "Here it Is", "New Dreams" and the brilliant opener, "All I Want", which is built on a foundation of ominous, well deployed keys and a haunting chorus. Gripping listening, though don't let that stop you from enjoying the rest. There is an added bonus of subliminal layers of sound throughout the disc. Whispered words and interesting instrumental passages designed to catch your attention on the first pass only to send your brain back to spin the songs again. Guaranteed that you will, as there is quite a bit to take in.

Equating this record with a color or mood, I would point to the shade of a sky at dusk as nocturnal urges slowly lead the senses down a new path, destination to be determined. There are definite rewards in staying the course.

Commitment to uniformity in style and execution is commendable, without detours into a musical version of multiple personality disorder. The Rose Phantom owns their vision, delivering a consistent and satisfying song cycle.

Overall the production is immaculate, perfectly complementing the writing which is bolstered by strong performances on all counts. For those of you out there who still like good melodies, as opposed to "noises" haphazardly dropped on top of "beats", you will really enjoy Abandon. All of the pop sensibilities that drove the best electronic music of a bygone era married to modern technology. Produced and engineered by "Danegerous" Dane Morrow and The Rose Phantom, the disc was mastered by Aidan Foley at Masterlabs (U2, Foo Fighters, Dead Can Dance).

Posted by Sean Coleman at 8:39 AM No comments: Links to this post