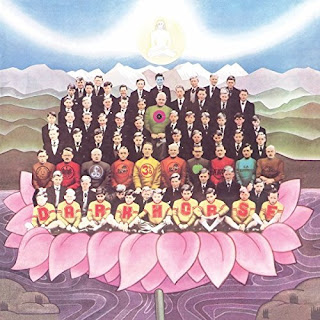 George Harrison turned a corner with his third studio release. Featuring an array of session players, notably members of the LA Express, the result plays a lot better now than it did to those eagerly awaiting its arrival in the shops back on this date in 1974. While it is not the best LP in his discography (that honor typically goes to All Things Must Pass), it is quite worthy of investigation as he explores a few different sonic avenues. There is a looser feel to some of the tracks ("Hari's On Tour (Express)", "Maya Love") and the author isn't shy about chronicling some of the painful recent events that had cast a shadow upon his personal life. Substance abuse ("Simply Shady"), his marital breakdown/separation ("So Sad", the bizarre cover of and lyrical updates to "Bye Bye, Love") are laundered and left to freely twist in the breeze.

Despite the rough patch, a sense of humor remains. The title cut makes a number of amusing allusions to his status as the quiet, economy class former Fab who sneaks up to pull away from the others in field, running on a dark race course. It features some beautiful, Harrisonoid changes, with a jazzy arrangement lifted by the flute of Tom Scott. Definite highlight and deservedly got the nod as a single release. His voice was not in the best shape for these sessions, though the slight frog in the throat delivery comes very close to that of his old pal Eric Clapton on this one. This actually helps, rather than hinder, the end product. Soul informs the stunning "Far East Man", adding yet another dimension to the overall eclecticism of this disc. This was a co-write with fellow raver, Ron Wood and one that he hoped might pique the interest of Frank Sinatra in terms of having Ol' Blue Eyes cover it. He passed, though you should not as it ranks with "Dark Horse" and "Maya Love" as a standout here. The only real clunker is "Ding Dong, Ding Dong" which was intended to reap some airplay as a would-be seasonal favorite. Lavishly produced, it bombs the assignment due to Harrison's inability to provide a strong vocal performance. In the end, it should have been elbowed off of the completed project.

Why did this effort receive such a critical pasting when it first appeared?

Refusing to play to type, Harrison deliberately went in a 180 degree direction from his work up to that point. Delving into jazz, soul and taking a more spontaneous approach to his craft were bold moves. The record-buying masses aren't keen on change. George put his foot down on providing the musical comfort food that his Beatle-obsessed followers were craving and in doing so, created some very compelling soundscapes for Dark Horse. Listen with fresh ears to the closer ,"It is 'He' (Jai Sri Krishna)". Deeply introspective and exquisitely crafted, it is several summers ahead of what his contemporaries had on offer at that time. Ragged in places, though disarmingly honest overall, Dark Horse is a far better record than its detractors would have you believe. Spinning it again today has revealed further nuances that have only served to reinforce that opinion. Revisit your vinyl copy (if you have one) and hear for yourself.