MASTER OF REALITY AT 46 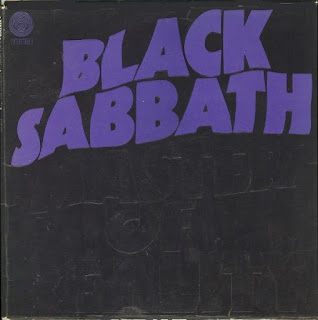 Seizing an opportunity to spend more time on recording their third LP, Black Sabbath invented a genre of music that has been widely copied (though never matched). Detuning his guitar to C sharp on a handful of tracks would prove to be a masterstroke for Tony Iommi, giving the band an aural fingerprint unlike anything that had come before. Master of Reality was released on July 21st, 1971, though it has aged quite well. From the opening cough that announces "Sweet Leaf" through to the last section of the brilliant, multi-part "Into the Void", there is an unshakeable confidence in every aspect of the disc. Bands like Kyuss built entire careers from this template. The one weak spot is "Solitude", which could have easily been replaced with something more representative of the other monsters that inhabit side two. The production is quite dry, which only serves to hammer home the dark tone that pervades all subject matter presented. Following the tribute to inhaling left handed ciggies, which is interrupted by an inspired, three-piece instrumental melt-down at its midpoint, there is the synthesized drone that heralds "After Forever". Burrowing into the deepest part of the frontal lobe before the riff kicks down the door, this startling composition sports lyrics celebrating liturgy and light. Quite a jarring juxtaposition to the sonic blast crater that the musicians create. Darkness takes back center stage with the crushing advance battalion of guitars that storm your speakers in "Children of the Grave". Another instant classic, which speaks to the escalation of the nuclear arms race and the fear stoked by the mere threat of using such weapons. Bill Ward's timbale assault helps to create nervous tension, though that creepy audio deployed toward the run-out grooves is unnecessary.

The two long form pieces which grace the second side that are not called "Solitude" are sublime. While the shockwaves they produce will loosen fillings, liquify your brain and soften the hardest of arteries, melodic figures remain a key ingredient. Personally, I would rank "Into the Void" as one of the best things that the quartet ever committed to tape. Hats off to Geezer for his storyline involving humankind deserting a battered Earth in the hope of finding a more hospitable world.

Is this an important release?

Absolutely. Like it or not, they brought something new to the table in terms of listening experience. Rather than continue to mine the blues based seam that they enjoyed in their early development as a gigging entity, the group (led by Iommi) went a step further. The first six Sabbath discs should have a place in any decent music collection, though Master of Reality is the turning point that truly made them unique in their era. Taking a much different approach on Vol. 4 the claustrophobic, gloriously sludgy sounds found on this record would begin to vanish.