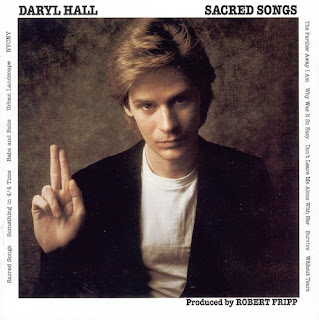 Born out of a mutual admiration society that was formed by two musicians of estimable talents, Sacred Songs is inspired. Daryl Hall set out to make his first solo album unencumbered by expectation, inviting Robert Fripp to handle production duties. Their pairing works like a Swiss watch. Hall is the main composer/bandleader, though Fripp also plays guitar throughout, has a co-wrting credit on "NYCNY" and contributes an austere, Frippertronic instrumental ("Urban Landscape"). Record company executive meddling syndrome (RCEMS) nearly relegated this stellar disc to the vaults back in 1977. Fortunately for listeners, reason prevailed over crass commercial interests.

Conversational marker on that point for a moment.

Opening in conventional territory, the title track would slot in comfortably amongst the power pop gems that Nick Lowe and Dave Edmunds turned out in the late seventies. Pub rock with soul. Turning a corner, "Something in 4/4 Time" is sublime, with a great hook and peerless vocal performance that makes it stand out from the pack. Subversive, bitter wit sums up the ultimate compromise in sacrificing artistic ambition to grab the attention of the masses.

Unwittingly, you are being primed for the 180 degree jolt that follows with "Babs and Babs". Fading in on the bass line that anchors this spectacular tune, a lyrical conversation is set up. Fripp takes a solo and then the entire production lifts off the ground, heading for the stratosphere in a brief interlude of ethereal "Tripper"-tronics, supported only by the drums which are heard faintly from the clouds. Snapping back to reality, we return to the narrative with trippy soundscapes creeping like fog, enveloping the track through to the outro. Startling in execution, there is a brief respite in the form of the aforementioned "Urban Landscape" which provides a soft landing pad before the onslaught that is "NYCNY". Nervous tension is built in a tight, guitar centric wig-out with time signature shifts out of a prog wet dream and outstanding vocals from Hall. Brilliant in all respects, it is a fitting closer to a very ambitious side one. The second side is heralded by the co-mingling of keyboards and guitar loops that suggest psychedelic sunrise, dissolving into the brief, yet lovely, snippet that comprises "The Further Away I Am". The rest of the program floats gently back to recognizable ground, while maintaining the quality that permeates every groove here. "Why Was it so Easy" is one of Hall's most underrated creations, boasting a beautiful melody, wistfully open-ended lyrics and per usual impeccable vocals. There are subtle interpolations of Fripp's signature sounds in "Survive" and the closer, "Without Tears". Displaying dizzying heights with vocal range, while supporting himself on piano, Hall fully commits to a piece which seems to end before it begins, trailing off with a musical question mark. Fitting for a disc that delivers surprises at every turn.

There are subtle stylistic nods to production tricks that were deployed on some very English records forged at EMI in the late sixties. The hypnotic riff of NYCNY is snapped off mid-bar to end side one abruptly, while "Don't Leave me Alone With Her" has a full fade with seconds of silence before it comes roaring back to play out. Blink and you may miss both of them, though someone was clearly having fun with the final mixes.

With respect to that conversational marker, this disc was held back from release for three years before RCA finally gave it the green light in 1980. Apparently, the reason for initial executive indisposition toward putting this out when it was ready in '77 was the perceived lack of a hit single. Shame on them.

Much is made about great "lost albums" that send collectors into frenetic searches, only to find the chase more romantic than the catch when they finally sit down with their acquisition.

Sacred Songs is a different story.

Mixing art with accessibility is always a tightrope act, though Hall pulls it off. Given the speed with which these songs were recorded, there had to have been a very easy dialogue amongst the musicians in support. The playing is spotless, production is clean and Hall's vision for his compositions is clear. It is a pity that a follow up was not undertaken as this partnership had great promise. If you find Sacred Songs on vinyl, grab it. Guarantee that you will return for repeated listens.