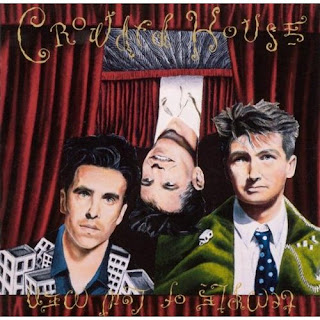 Popular music took an extremely unfortunate sonic detour into technocratic mediocrity in the eighties, with the advent of digi-crap, synth pads and annoying drum sounds. Worse still was the gratuitous amount of reverb that most of the productions of that period were drowned in.

Talentless dolts that never would have made it past a hailstorm of flying beer bottles toward the stage became liberated from such pesky tasks as playing their instruments, singing on pitch and in most cases, crafting a decent song. Crass commerce won the day, with dumb, day-glo videos distracting listeners from the fetid stench emanating from their speaker grills. This is really where things went horribly wrong with the so-called “music biz”, creating a very nebulous and disparate atmosphere that allowed many pretenders (all apologies to Chrissie Hynde) to clog the charts with more garbage than ever thought possible.

Thankfully, there were artists that chose to eschew the trappings of prevailing trends, writing and producing music that would escape the gravity of the era in which it first appeared.

If you asked me to bet on an individual who would make the top of the class as a contemporary pop tunesmith, I’d tell you that the smart money would be on Neil Finn.

Cutting his musical teeth as part of his older brother Tim’s band (Split Enz), Finn flowered as a writer, penning several of the group’s hits in the early eighties before that aggregation’s rotating lineup sputtered out. Following the Split Enz farewell tour, he and drummer Paul Hester joined forces with bassist Nick Seymour to form The Mullanes in 1985. Relocating to LA, Capitol records encouraged them to change their name to Crowded House. “Don’t Dream It’s Over” connected as a hit single from their self titled first LP in 1986, though it took some time before radio discovered it. Lucky it was, as listeners were treated to well crafted, edgy, melodic pop which owed a debt to the golden age of mid-sixties mixed with Finn's own particular vision.

Dark shadows loomed over the subject matter of his compositions for the immaculate follow up disc, Temple of Low Men. Forced to capitalize on the momentum gained from their first outing, Neil delivered under pressure.

Breaking the sophomore jinx has proved difficult for many bands, as the old saying rings true.

You have your whole life to write your first record and little or no time to produce the second one.

Produced by Mitchell Froom, who also contributed on keyboards, the disc contains none of the grating synths or clangy drum noises that were all the rage in the late 80’s. The decision not to obfuscate the end results with the shallow sounds of that time period proved to be wise, ultimately giving the material a much longer shelf life. Instead, great care was taken to capture warm, stripped down takes from the three instrumentalists (four with the addition of Froom) who played with taste and restraint, always in service of the song. All selections are thoroughly engaging with nary a note going to waste in the entire program.

Gelling as a trio, the musicians create an intimate soundscape, augmented by Froom's atmospheric parts. Spooky vibes permeate the opener ("I Feel Possessed"), with icy retro keyboard textures sweeping over a choppy, stop-start beat in the verses that perfectly complements the sentiments expressed in the lyric. Describing the claustrophobic element of an all consuming relationship succinctly, even when the musical tension snaps in the hooky chorus, the ominous fact remains.

I feel possessed when you come round

Touches of cynicism and introspection are everywhere, with the listener getting a sense that the author of these lines could be expressing serious doubts about newfound success, partnerships and a host of other possibilities. This desultory, minor-key unease is leavened by truly great melodies for which Finn has a natural touch. Humor, however black it may be here at times, is the other crucial ingredient in the successful blend of personalities within Crowded House. Paul Hester was generally the ringleader when it came to the infusion of silliness onstage or alleviating the "serious quotient" that often makes obligatory promotional interviews fairly joyless for entertainers.

Their skills at putting their material across in a minimalist fashion served them well.

"Kill Eye" comes across almost as a bizarre, lost White Album cut. Chord changes swirl over a dense, insistent pulse rife with extraneous noise. Easily one of the more experimental journeys taken on this sometimes nervous soundscape. Just as you think you're headed in one direction, the ride jolts abruptly and peels into a 180 degree turn. "Into Temptation" is an unsettling exploration of human weakness, painted so vividly that it caused the author's wife at the time to question the inspiration. The arrangement features mellotron parts flown in from twenty years in the past. They join soft acoustic guitars and brushed snare in a triumph of aching economy. To me, this ranks with Squeeze's "Tempted" and Lennon's "Norweigan Wood" in terms of evoking the raw emotion of remorse in the wake of infidelity.

You laugh at yourself while you're bleeding to death

Chalking up another tale rife with bitter wit, "Mansion In the Slums" presents some of the most sarcastic lines on the album, though it is done with such melodic aplomb that they sneak by on first spin. Meditating on the age old traps of greed and ego, there is no preaching involved. The dark undercurrent is subtle, yet the message is delivered.

Who can stop me? With money in my pocket. Sometimes, I get it free. The best of both worlds.

The laughs just keep on coming, though it wins my vote for the stand out in a class of high achievers. "Better be Home Soon" scored as a single, though the enticing melody and heartfelt plea for the return of a love interest is tempered with dismissive ultimatums involving the fact that the author is "right" and may decide to bail even if the object of their desire does come back.

Strong contributions from everyone involved makes the hard medicine go down fairly easily. "Never be the Same" and "Love This Life" provide real bite without ever straying into turgid, humorless territory. One thing that floored me at the time was the lack of impact that Temple of Low Men had in comparison to its predecessor. They had joked about titling it as "Mediocre Follow Up" or "Krakatoa", though it is nothing less than a spotless ten songs. Quietly beautiful song craft doesn't always translate into mass success. Fairing respectably chart-wise, it certainly deserved much more of a response from record buyers at that time.

Brimming with invention and energy, the music has aged remarkably well, sounding every bit as fresh as it did when I first picked it up. There is something substantial lurking beneath the surface of every cut. Highly recommended listening.