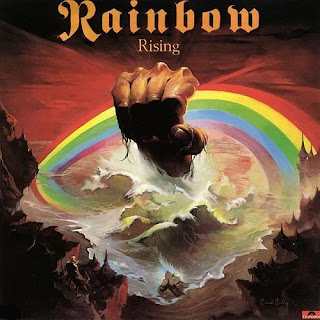 Forging ahead in grand style, the two principal members of Rainbow wrote six new songs together and as the calendar page flipped over to usher in 1976, Ronnie and Ritchie had fired the rest of the band.

When the magicians clapped their hands, not only did a dove materialize but also three new hired guns: Cozy Powell, Jimmy Bain and Tony Carey now filled the drum, bass and keyboard slots. Dream lineup in place, they recorded the Rising album in just one month. As with the first disc, the legendary Martin Birch handled production/engineering duties and the final product clocked in at just 33 minutes.

This is where the similarities end.

Lauded as one of the finest works of the heavy metal genre, there is zero filler in this most impressive set.

Rock was starting to show some bloat by this stage. The advent of the power trio in the late sixties saw the role of the rhythm guitarist vanish through the magic of signal phase distortion, walls of amplifiers and PA systems designed to blast the eardrums of thousands. The early seventies gave rise to acts who invented LOUD. Sabbath, Purple, Zeppelin... all delivered volume by the truckload. As the decade wore on, these groups would move away from the sonic styles that made them famous. With "heavy" giving way to soft rock, disco and homogenous, corporate, soulless garbage, there had to be a successor to the recently abdicated metal throne.

This incarnation of Rainbow would not disappoint.

Built on the sheer strength of the players involved, the opener ("Tarot Woman") is prefaced by over a minute of synth noodling with Blackmore's intro riff faded up into the mix as everyone kicks in hard.

"Beware of a place, a smile on a bright shiny face. I'll never return, how do you know? Tarot woman"

Ritchie's solos are tasteful and Dio provides his own harmony vocal to punch home the chorus. It's a mesmerizing performance all around. The remainder of the first side is no less gripping, with every measure taken to keep the arrangements tight, yet each musician has room to showcase their talents. The drum fills in "Run With the Wolf" are plentiful, inventive, though they do not overpower the song. Even better, the running time of each selection is quite economical. Business is stated quickly, with a hard edge to balance the near pop format, replete with extremely effective hooks.

Epic pieces are saved for the mighty second side.

"Stargazer" gets the full orchestral treatment, drifting close to Zep's "Kashmir" in places (you'll hear it) and prefigures the territory that Iron Maiden would later explore further ("To Tame A Land" and "Powerslave" ) with guitar parts that have a middle eastern flavor.

Closing with the supercharged "A Light in the Black", each instrumentalist really gets to stretch out, with dextrous, flame-thrower solos tossed out by both Carey and Blackmore.

It really doesn't get much better than this. Dio hurls vocal Molotov cocktails, making the most of every syllable, wasting not a word. Rising is clearly the very best LP to be issued in the Dio-era of Rainbow and this line-up is the main reason for that. Jimmy Bain would soon be dumped from the band by the ever mercurial Blackmore, though he would be again recruited by Dio in the early 80s when the singer formed his own group.

The next item on the Rainbow project list involved capturing their live show for release.
Posted by Sean Coleman at 10:52 PM

Excellent review Sean! A lot better than mine! In my opinion this album is one of the most underrated in the heavy metal/hard rock genre. Ronnie James Dio's vocals gives me the goosebumps on "Stargazer" and the interplay between Carey and Blackmore on "A Light in Black" is priceless!

This was great. You really have a gift with writing reviews.

I like the pic of your son (he's getting so big!)