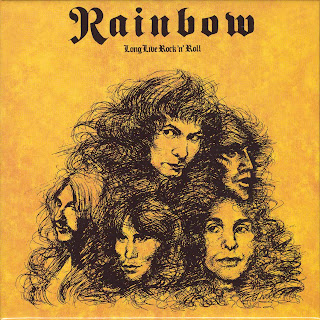 Personnel changes would be the only constant during the period that Rainbow was active. Following the Rising tour, it was three up, two down.

Well lads, let's get to work on the new album. Uhhh, except you, Mark. You're fired!

Blackmore decided to handle the bass parts himself, for the most part, with Bob Daisley called in to take the honors on three tunes ("Kill the King", "Sensitive to Light" and "Gates of Babylon"). When the dust settled, the finished product fell a bit short of their last studio effort. Indeed, there is an overall sense that the creative interplay between Dio and Blackmore is on the wane, the result being workmanlike.

A lesser opus, if you will.

Containing a mix of the very fine ("Kill the King" "Gates of Babylon") and play by the numbers ("Lady of the Lake" "LA Connection") Long Live Rock 'n' Roll is a bit too uneven to earn the "classic" stamp. Dio turns in his usual spotless vocal performance, though Blackmore's playing doesn't have the fire he had previously displayed and many of the riffs come off as fairly generic. Disappointing for someone of his capabilities. The signature, mystical quality of the lyrics seems to be submerged in favor of more mundane fare. "Sensitive to Light" sounds as if it could slot in comfortably on a Nazareth LP, with the exception of the lead vocals.

The Devil makes an appearance, as per usual, though the Goat-Footed One's presence is fleeting as are the themes that evoke mist, swords and sorcery. Dio's natural affinity for such subject matter was now at odds with Blackmore's desire to lean in a more mainstream direction. This rift would widen, leading to RJD's depature from the Rainbow fold in 1979. The revolving cast of musicians would render the band unrecognizable as they soldiered on into the eighties.

"Rainbow Eyes" closes out this set in curious fashion. The execution, structure and pace are undeniably pretty, though this track really belongs at some second rate Renaissance Fair, being woefully out of step with everything else here.

Far too medieval and not enough evil.

The next move for this powerful singer would surprise many and forge another winning, albeit short-lived, writing partnership.

Never paid any attention to Ritchie Blackmore until I came across Blackmore's Night. Lots of history to listen to.