IN THROUGH THE OUT DOOR AT 40 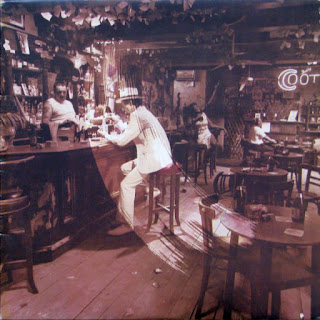 New music from Led Zeppelin was eagerly awaited by their fan base in the summer of 79. Three years had passed since the issue of Presence and The Song Remains the Same soundtrack. They had not set foot onstage since the ill-starred US tour in 1977, which had been cut short due to the tragic death of Robert Plant's son, Karac. All group activity came to an abrupt stop as the once mighty dirigible lost altitude, floating gently back toward earth. At this point, it was uncertain that the quartet would ever regroup again. This was kept quiet as Plant took time to grieve with his family.

While they were away, the sonic landscape shifted. Punk, new wave, and pub rock offered back to basics, streamlined fare that hit listeners hard. Lengthy sets, interminable solos and spectacle were replaced by short blasts of adrenalin from groups that made up for in energy what they lacked in chops. Radio was dominated by disco, soft rock and pop. The dinosaur tag was slapped on those artists/bands that came to prominence in the previous decade and who were now considered out of touch.

How would Zeppelin respond, creatively, to these developments?

Their return to business would be a fairly glacial process, though the offer of free studio time that came from Abba members Björn Ulvaeus and Benny Andersson would be too good to pass up. The now defunct Polar Studios was be no means conveniently located, though it did provide a new environment in which to work. Convening in the last months of 1978 to start the project, winter weather in Stockholm ensured that the players would be woodshedding without distraction. Despite this fact, certain indulgences were still impeding half the team, leaving them not quite match fit. (We'll insert a conversational marker on that point.) They soldiered on, finding their feet and rediscovering their chemistry as a functioning unit.

The contents of In Through the Out Door would serve to both delight and confound listeners on first pass. The key element common to all of their albums is clever sequencing. Page especially knew the power of an attention grabbing first track bookended by a dramatic closer. "In the Evening" would continue that tradition in grand style. Deploying a Gizmotron, Jimmy sets up a hazy, atmospheric drone that has a middle eastern flavor. Hypnotic as it is exotic, the minute long intro creates a spacey feel, building expectation of what's to come.

Plant breaks the spell, leaving Bonham to kick down the door with authority. Over his four on the floor stomp sits an exquisite, rotating riff punctuated by dive-bombing whammy bar action. All perfectly complimented by the innovative synth touches of John Paul Jones. Page's solo is preceded by a brief, but glorious, noise explosion that he created by depressing the tremolo arm toward the body of his Strat as far as it could go before quickly releasing it. He references this trick in a 1990 interview with Guitar World magazine, stating that he wanted to shake up anyone listening to the tune and make them go, "what the hell was THAT?!?". There is even a quick nod to Clapton's figure from "Outside Woman Blues" in the outro passage to ice the cake. Outstanding work from all involved.

Now is an appropriate time to return to that aforementioned conversational marker. The material that follows can scarcely be described as "Quintessential Zeppelin". This is where devotees of the band who appreciated their "scorched-earth" approach to rock were puzzled. Similarly, if you were in search of acoustic fare there wasn't any to found. One main factor in the musical knuckleball tossed out here is that John Paul Jones had a larger hand in the writing than he had previously. He had also come into possession of a Yamaha GX-1, an analog polyphonic synthesizer organ that figured prominently in the overall sound. He stepped forward because Page had partially checked out, his contributions greatly scaled back in comparison to all efforts that had come before. He played brilliantly, though mainly to add color instead of being the driving factor behind these compositions. Be mindful of this as you listen.

"South Bound Saurez" is a light, piano driven piece that would have sounded more at home on an early Elton John record. Not a bad tune, though nothing that sticks in the brain or bears repeated spins. Zep aficionados were not seeking such detours nor were they hoping for the lads to suddenly morph into the Atlanta Rhythm Section. "Fool in the Rain" is far superior, boasting a strong melody that supports a clever narrative where the protagonist is so anxious about being stood up on an important date that he blanks on the agreed upon meeting place. Nifty 12/8 meter is employed, with the piano and bass playing slightly against it. The instrumental star of this piece is Bonham, who flawlessly executes a deep pocket groove that is worthy of every scrap of praise which has been heaped on it over the years. His technique is stunning. Percussionists can easily go to Youtube and marvel at his work on this cut in isolation. Cigar goes to Jones (with an assist from Robert) for the arrangement, featuring that cool, freewheeling samba breakdown. Plant nails his vocal, making this an absolute highlight. Again they aren't playing to type, though that doesn't matter when the song itself is so strong. Rounding out the first side is "Hot Dog", which is notable for Page's tricky riff, barrelhouse flourishes on the 88s from JPJ and comedic, cornpone delivery from Plant. His Elvis worship comes into play here as does Jimmy's love of the Sun Records sound. While this is a fine example of their versatility and ability to comfortably slip into another genre, the track is dispensable. "Wearing and Tearing" which had been committed to tape during these sessions, but left in the vault, (eventually released on Coda in 1982) would have been a much better fit.

Side two begins with the sprawling, proggy "Carouselambra". Dominated by the stabbing, icy synths of Jones, this multi part vehicle is interesting in places, yet it would have benefited from judicious editing as the running time outlasts the strength of the concept. Zep were rarely tedious with their studio work, the lone exception being made here. By contrast, "All My Love" is a triumph. Taking care with all possible loose ends, the lyric is a fulsome, heartfelt tribute to Plant's son. Out of tragedy, healing is achieved in creative expression. Beautifully sung, delicate guitar decoration is woven in seamlessly in with the keys. All is topped by a stately, classically influenced solo from JPJ. It is the closest that they ever came to a pop song and is another standout. Page was dismissive of this approach in later interviews, going as far to say that it really wasn't their style. He plotted with Bonham to ensure that their next project moved them squarely back into the hard rock camp. This would sadly not come to fruition. In Through the Out Door did close out in far more familiar, bluesy territory. "I'm Gonna Crawl" is soulful, nodding to the Stax sound. Plant pours some real emotion into the mic. And Jimmy? If the master doesn't bring you to the verge of tears with his expressive solo, you don't have a heart. It almost seems as if he is roused from a soporific state, taking the reins belatedly to remind us that his gifts are still intact. Ending on a single note from Jones that sounds like a musical question mark, there is a feeling of unfinished business hanging in the air for a moment. With that, the prodigiously talented aggregation that guided a generation on a magically mind-blowing, decade-long sonic journey took their final recorded bow. Pity was that no one realized it at the time. All future plans ended with the shocking death of Bonham the following year.

EPILOGUE: IN THROUGH THE OUTTAKES

Forty years have passed since the release of this often misunderstood LP. Points can be made for the fact that though it was uneven as a whole, they were at least making an attempt to expand their horizons, experiment with new technology and deliver an end product that was moving with the times. For better or worse, the synthetic layering (which seems woefully dated now) prefigured what was to come in the eighties. All four members of Zeppelin had large music collections, covering a broad range of styles. It should come as no surprise that they would add new colors to their creative palette. Commercially, the disc flew off the shelves of record retailers with alarming speed. Music executives of the era credited this platter with single handedly rescuing an industry that was flagging as the seventies drew to a close.

Page has been protective of their legacy, acting as curator over the years when it has come to the three R's of this iconic band: Remixing, Repackaging and Re-releasing. The 2015 reissue didn't yield very much in the way of aural goodies. Essentially, the second disc features an alternate mix of each song from the original set. It would have been nice to hear demos or tracks that never saw the light of day in any format. Even better, there is live documentation of a handful of these tunes that could have been cleaned up and offered for consumption. Only extremely hardcore fans would play the 2015 extras more than once. If you see a vinyl copy in good shape for five to ten bucks, grab it. No need to shell out anymore than that. There are six different cover photo variations out there as well, just to add to vinyl collectors fun. Happy hunting.

This gig from June 30th, 1980 is one of then best you'll hear as far as late period, live Zeppelin goes. Captured without a net in Frankfurt, they are firing on all cylinders. Far more solid than their Knebworth performances. One week later, they played their last show with Bonzo.