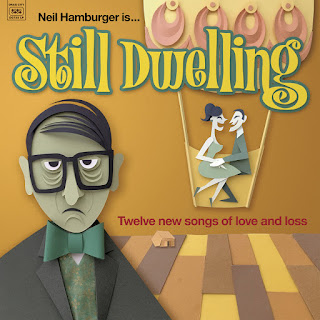 Commitment to a persona, without so much as a wink, is commendable. Neil Hamburger is an inspired product from the fertile imagination of Gregg Turkington. On stage, he inhabits this character perfectly, often challenging his audience with material that is intentionally offensive, groan-worthy and insanely funny. Possessed of a razor sharp wit, he also expertly destroys would-be hecklers while moving, at a glacial pace, through each set up. Hamburger delivers all and sundry in a very distinctive voice, which he deploys on his latest recording, Still Dwelling. For the uninitiated, Turkington steps up to the mic, singing as Neil Hamburger on all twelve tracks. This is not an easy task, though he makes it seem effortless. For the prospective listener, do keep this in mind when you delve into this very fine disc.

Featuring an impressive list of guest contributors, meticulous production, arrangements and impeccable playing, you will be drawn in by the lush soundscape that lifts every song. The choice of covers had to have been an assiduous process as each selection takes you on both a genre and era-hopping journey. Two original compositions ("The Luckiest Man in the Room" and the closer, "Little Love Cup"), co-written by Turkington and his long-time collaborator Erik Paparozzi, round out the set.

Special mention must be made of the masterful job that Erik Paparozzi does in wearing multiple hats as producer/ arranger/multi-instrumentalist. Assuming the roles of Phil Spector, Brian Wilson and one-man Wrecking Crew (pun intended), he raises the ghost of those legendary recordings that came out of Gold Star and Sunset Sound in the sixties. What is most impressive, is that he did not have the luxury of sitting behind the glass at the board with a crack team of session players ready to do his bidding. He alone lays down all of the bed tracks and painstakingly overdubs a laundry list of additional instrumentation. Deserving of every superlative, this is genius level work and the main reason why the end product has such a warm, cohesive sound.

"Backwards Traveler", which originally featured on Wings' London Town LP, is a clever way to open the proceedings as it sets the tone for the trip back in time that you are about to take. Different from McCartney's arrangement, taken at a faster pace and wisely opting to drop the transition into "Cuff Link", it gives Hamburger a flashy vehicle to establish himself as master of ceremonies.

Highlights abound, though "Everything's Alright" takes things to yet another level of excellence. In addition to the aforementioned exquisite musical underpinnings, Jack Black (as Judas) and Mike Patton (as Jesus) lend their vocal talents to the mix. Their voices bring a sense of balance to this stunning, over the top slice of musical theatre. Former touring keyboardist for the Who, John Bundrick ("Rabbit" to his friends) makes the first of his four contributions, shining brightly with his nimble work on the 88s. Andrew Lloyd Webber himself would surely approve.

Paul Simon's "Homeward Bound" has been covered before, notably by Glen Campbell on his 1967 album, By the Time I Get to Phoenix. His rendition is earnest and smothered in strings. Flipping the script, it is arranged here as a country vehicle. Hamburger brings a genuine a road-weary feel, audibly sighing at times while half-speaking the lyrics, with which he takes a couple of pointed liberties. ("On a tour of one night stands/my suitcase and my jokes in hand" and "Tonight I'll tell my gags again"). Those dusty, maudlin ballads where the narrator spins a deliberately sad tale with a cast of thousands wailing away on backing vocals are parodied here in grand style.

A deep sense of pathos is conveyed convincingly on "Standing on the Corner". Where the original was jaunty, this version has you wondering why the protagonist seems so morose. Key to the desultory atmosphere is the brilliant string arrangement, courtesy of Petra Hayden. Minor key sad, you almost forget about the objectifying nature of the lyrics until the truly creepy, half-whispered delivery of the line, "Brother you can't go to jail for what you're thinking". Imaginatively reinvented, the whole thing works like a Swiss watch. The back nine of Still Dwelling continues with some very pleasant surprises. "Crazy On You" has to be heard to be believed. A galloping drum pattern is interpolated by short breakdowns, with sweeping orchestration (handled by "Rabbit") and choral backing. The coral sitar substituting for the guitar solo is particularly inspired. You can almost picture Hamburger, comb-over and bow tie askew, prodding his finger wildly at those whom he vows to unload on.

Gonna go crazy on you and you and YOU!!

Further ramping up the derangement factor, he also delivers a truly unhinged vocal take on "World Without Love". Gives fresh perspective to that opening line.

Please lock me away

The grand slam moment in this highly entertaining program is the marriage of the Midnight Cowboy Theme with John Lennon's "Isolation". After hearing this beautifully executed piece, you may even be moved to do an A/B comparison with "Let's Go Away for Awhile" from Pet Sounds. Why? Not because the melodies are anything alike, but rather that this is the vibe that radiates from the speaker grills as the music washes over you. It is a very high complement to all involved that this feel is captured perfectly. It isn't a stretch to imagine this wafting from dashboard of a 1967 GTO convertible, racing along the Pacific Coast Highway at sunset.

Closing out on an unexpectedly touching note, "Little Love Cup" offers a tender message to be good to one another.

You'll never be lonely, if love everybody you know.

Signing off with a touch of show-biz schmaltz, the mantra that you're left with is concise: No one loves a hater.

This extremely fun journey through the past is quite clever with nuances that reveal themselves upon each new spin. Love and loss through the lens of truly talented people who have a deep understanding of music history combined with a subversive sense of humor. I would highly recommend that you seek out a vinyl copy of Still Dwelling as this format will allow you to take in every note as it was intended to be heard. Support the artist and grab this for yourself right here