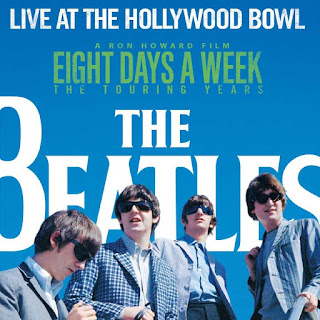 Fourth time around would best describe the prep that went into getting this time capsule to its present state.

Capitol Records' Voyle Gilmore had the first crack with his team on hand to capture the Beatles Hollywood debut on August 23, 1964. Utilizing a remote sound truck parked several blocks from the venue, they plugged directly into the stereo board at the Bowl. Primitive equipment (3 track machines) mostly picked up gale force screaming that saturated the tapes, with VU meters constantly buried in the red. This exercise was repeated a year later, though technical issues with Paul's microphone on the August 29th show rendered it useless. The set on the following night turned out to be much better and was recorded without incident. Some work was done to prepare a disc for official release at that time. Unhappy with the overall sound quality along with their collective performances, the group vetoed the plan.

Phil Spector, following his work with the output from the Get Back sessions, was asked to do a similar salvage job on these concerts in 1971. His efforts never escaped the Apple vaults.

Overwhelming odds were in favor of the project simply being left for dead.

In early 1977, the legendary producer and engineer were tasked with delicately transferring the original masters to 16-track tape for filtering, equalization, editing and mixing. Their major obstacle was finding a 3 track machine that actually worked. With much luck they did so, though it was barely functional. Cold air had to be constantly directed on it to avoid overheating and destroying the precious tapes. Their painstaking work paid off, bringing an exciting document to the masses. All four Beatles received a copy, though only Lennon rated it as fit for public consumption. (Harrison thought that it wasn't very good) Nonetheless, it was shipped to record retailers in May of that year, sailed to number one in the UK, number two in the US and sold over a million copies. Contrary to myth, they were a solid live act. Caught in relatively decent form here, it is to their credit that there were no major train wrecks considering that they were playing to 17,000 screamers without monitors for reference. Highlights include "She's a Woman", "Things We Said Today" and Lennon laughing in the middle of "Help!", overwhelmed by crowd reaction (or nerves) Everything is taken at a much faster tempo.

Cover art features a clever mock up of concert tickets that bear no resemblance to the originals. Here's what a lucky fan would have actually presented for admittance to the 1964 show.

In 1984, the official Hollywood Bowl set went out of print. The vinyl is easily found in second hand record stores and I still have my copy from the early 80s. Bootlegs are out there, too, if you want to hear all three concerts in their entirety. Hollywood Bowl Complete is a good one. (They even got the tickets right.) 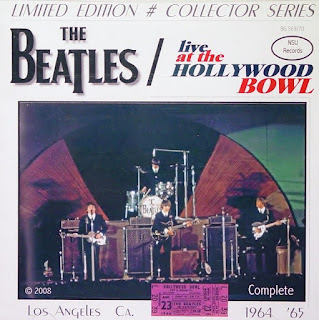 For die-hard collectors, Capitol also released "In-Store Only" 8 -track tapes with five songs from the album to record outlets. These listening post promos are now nearly impossible to find. 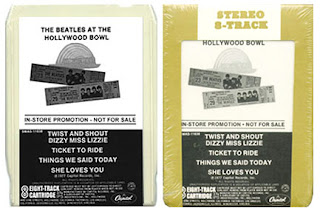 When the Beatles catalog was repackaged for sale in CD format in 1987, Hollywood Bowl did not make the cut. Since that time, Apple has acted as curator to the most dissected, well loved and marketable collection of music in rock history. Everything from BBC sessions to the Anthology cutting room floor material had been dusted off and dangled in front of willing consumers in the nineties. The re-mastering of their work for the digital age was another massive roll out in 2009, yet this one remained under glass in the museum.

Giles Martin, with the aid of 21st century advances in recording technology, picked up where his father had left off four decades earlier. Take a moment to find out how this came together.

The general consensus is that the audio update allows the listener to properly hear bass and drums in the mix. "Ticket to Ride" is a completely different aural experience here as are "She's a Woman" and "Dizzy Miss Lizzy". Overall, the track sequence is identical to the 1977 issue, with four bonus tunes that are tagged on to keep things interesting for the casual fan. Hardcore collectors will likely view this as a missed opportunity to have all three concerts out there, though technical gremlins made certain performances unsalvageable. The energy (and volume) of the crowd still resonates even though over 50 years have passed. Their reaction gives the set an electric thrill, even as they threatened to overwhelm all attempts to preserve these shows for posterity. Very worthwhile addition to your collection.
Posted by Sean Coleman at 1:54 PM