FORGOTTEN MUSIC THURSDAY-ROD STEWART: AN OLD RAINCOAT WON'T EVER LET YOU DOWN 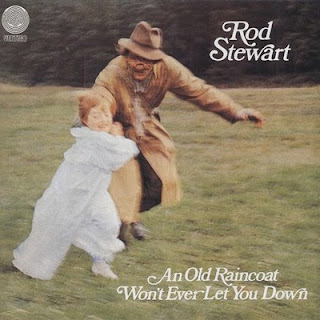 Quite good it is, with a supporting cast of musicians who would figure prominently in his next steps as an artist. Two of these characters, Ron Wood and Mick Waller, had shared a spot with Stewart in Mach I of the Jeff Beck Group. Organist Ian McLagan, who lends his nimble fingered talents here, would become a band mate and remain so into the mid-seventies, as Wood and Stewart had recently joined the Small Faces following the departure of Steve Marriott. This lineup change prompted them to re-brand themselves as The Faces.

Did you get all of that?

Having honed his signature larynx dipped in whiskey 'n' ciggies vocal delivery during his time with Jeff Beck, the voice is in fine form. Eight songs comprise the disc, four of which are his own compositions, title track included, while the remaining selections are well chosen covers. The first of these interpretations received the distinction of kicking off the proceedings. Turning the Stones' "Street Fighting Man" inside out, the arrangement here bears no resemblance to the version that graced Beggars Banquet. Quirky and extremely well executed, the musicians toy with every aspect of the tune. Ron Wood adds tasty slide and bass runs with exaggerated "eyebrows" that follow inserted full stops after each chorus. Following a brief instrumental detour, everything stops on a dime and does a 180 degree turn. Suddenly, the listener is now back in familiar territory as the lads faithfully reproduce the melody line and feel of the original. This doesn't last. In a moment of inspiration, we are treated to a brief bass solo which dives straight into a direct quote of the hammered, introductory piano figure from "We Love You". My assumption here, though the last bit is likely a tip of the hat to Brian Jones who had passed away the previous summer and whose composing fingerprints were undoubtedly all over the aforementioned, trippy piano part. If Mick and Keith were not impressed by this homage, if not somewhat envious, then shame on them. Only a comatose individual would fail to appreciate the humor and invention that went into this stunning rendition.

It gets even better...

Before we continue, one observation must be made by your humble scribe.

This disc is a treat because it is unpretentious and the musicianship is first rate but loose in an incredibly relaxed sounding manner. Human beings, not machines, are swept up in a joyous act of playing, yet there is focus with an end result that is very easy on the ears.

Why do we not hear this type of production today? Have we become so soulless in the pursuit of achieving a homogenized product that we can't accept a more adventurous approach to music making? Just take a listen to the robotic, auto-tuned, plastic, repetitive garbage that is being pushed on the masses. No taste, very little thought and zero personality. It is disposable, icy digital noise made for people who secretly hate music.

Worse than that, this mediocrity is expertly marketed to cover all aforementioned shortcomings and make the perpetrators seem as if they have produced a work of genius. Another tag that is tossed around far too liberally and applied to people who would be hard pressed to name a chord, let alone find/shape one on any instrument.

You have a choice as to what you put in your brain.

Well, look at the time! Let's get back to what Rod, Ronnie and friends lovingly cooked up for your listening pleasure.

Decorative instrumental touches abound, our session crew reimagines "Man of Constant Sorrow" in such a way that words fail to do it justice. Listen and find out for yourself, if this hasn't already been taken into your purview. There's no greater evidence of what made the rhythm section so special on Jeff Beck's Truth than what Waller and Wood bring to the title cut. Don't know about old raincoats, but this is three minutes of bluesy groove with barrelhouse piano courtesy of McLagan that won't let you down.

All told, this gem sails by and makes its statement in a mere half hour. Closing with a delicately different take on Ewan MacColl's oft-covered standard, "Dirty Old Town", it provides classy finish to an eclectic, understated set. For all that, it is Gasoline Alley and Every Picture Tells a Story that seem to garner all of the attention in terms of Rod's early solo ventures. This one never manages to escape the long shadow cast by those projects, both of which fared much better in the sales/chart sweepstakes. Lacking a an obvious single that could be extracted for radio exposure, this fine project was destined for the back of the dusty closet, joining the ranks of unjustly forgotten music from that era.

Trivia time! This LP was released in the UK on the same date as Black Sabbath's self titled debut (Friday, Feb 13th, 1970) by the same label (Vertigo Records). Curiously, it was issued in the US in the fall of 1969 as "The Rod Stewart Album" with a different cover. Regardless of what iteration you encounter, it is well worth having in your collection.
Posted by Sean Coleman at 12:22 AM