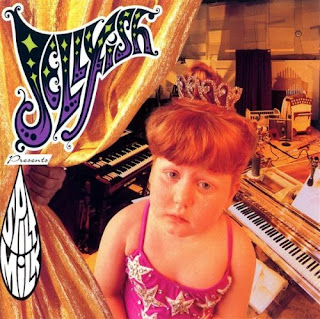 Jellyfish put together a sophomore disc that was smart, catchy and expertly performed. It is nothing less than a mind-fuck of epic proportions, marrying Brian Wilson's most earnest wet dreams with Queen at the apex of their mid 70s, multi-tracked glory. The work that went into this project could easily generate enough power to light ten major cities for a decade.

Aptly titled, the band may have unwittingly foreseen the futility in releasing a record that celebrated the stylistic charms of rock's "psychedelic" past in the era of back to basics grunge. Who's crying over Spilt Milk? Not me! I feel fortunate to have been recently steered toward this remarkable recording. (Thanks Andy!)

Better late to the party than never.

Wait just a moment. You there, casually reading this... Come closer!

OK, if you tend to get a little uncomfortable with the Jeff Lynne approach to production that shaped ELO's output in the seventies, then some elements of Spilt Milk may not be to your taste. If you crave an overall sonic experience that equates to a long bomb pass resulting in an incredible 80 yard touchdown, then this was designed for you. Another great bonus: Spilt Milk will forcefully pick you up by the lapels, shaking loose any musical lethargy that you've been experiencing.

Blending mastery in vocal arrangement with lush instrumentation, "Hush" is a seductive opener, boasting enough charm to lure birds from the treetops. Setting the mood perfectly, this beautiful soundscape fades as the ground suddenly drops out from beneath your feet. Four pop-rock gems are lined up, fired off in rapid succession, leaving the listener breathless. Swept away in a tide of fist pumping anthems, you could easily miss the clever wordplay that goes by at lightning speed. Ambitious, yet easy to assimilate, this run of tracks follows a concept and is nothing short of compelling. You hear the influences that shape "Joining a Fan Club" or "The Ghost at Number One" but there is a visceral energy in their execution that brings something entirely fresh to these songs. So much so that it silences the inner voice of the record store snob and simply begs to be heard on its own terms.

Closing out this spectacular set is "Brighter Day" which ties up every loose end in brilliant fashion.

You are left wanting more...

Core band members Andy Sturmer and Roger Joseph Manning, Jr. held the creative cards, deploying many of the weapons that made 60s/70s pop so durable. They also managed to toughen their work with just enough edge to keep things sounding contemporary. Differences of opinion led to the ultimate crime of a group breakup before they could capitalize on the strength of what they had done and start to build a larger following around it.

Spilt Milk ended up consigned to the realm of forgotten music as its very essence was fighting against the tide of what was popular in 1993.

Trends come and go...this one is timeless.