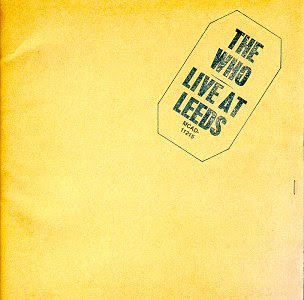 While the deaf, dumb and blind kid more than kept the band in the public imagination throughout the remainder of 1969 and into the new decade, The Who rode the crest of this monstrous wave on tour. Their relentless schedule served to sharpen their already brilliant live act, bringing them to a virtually unrivaled playing peak. Few groups of the time combined harmony, melody and yet still managed an all out assault on the audience in terms of decibel levels. Dynamic, tight and breathtaking on stage, they brought Tommy to the Metropolitan Opera house in New York and played a very memorable set at Woodstock, setting every venue on fire with their intensity.

Pushing into 1970, they had decided to review tapes of North American gigs to see what might be deemed worthy of releasing. Townshend was disappointed by what he had heard, claiming to have tossed the whole pile of recorded shows in a bonfire. Back in 1968, they had similarly considered putting out a document of a concert that they did at the Filmore East. This did not materialize, though the show has long circulated on bootleg in excellent sound quality.

So it happened that they decided to allow their February 1970 stops at Leeds University and Hull to be captured for posterity. Due to technical deficiencies, the Hull tapes didn't make the grade. Leeds yielded a winner, resulting in one of the finest live albums of the era, often cited as the greatest of all time, bar none.

The six songs that were issued from this date were just a fraction of the full set, though all carried the impact of a sledgehammer brought down on a box of cupcakes.

Mose Alison's "Young Man Blues" was chosen as the lead-off track as the trio burned behind Daltrey's blustering vocal. Moon made it seem like ten people were playing, his hands a mere blur and he kept up a furious pace, pinwheeling across the skins at the speed of a dentist's drill. Keep in mind that he would sustain this momentum for two hours plus.

This version was filmed in July 1970

Roaring through old Who favorites ("Substitute", "My Generation") as well as rock and roll covers ("Summertime Blues", "Shakin' All Over"), the original record culminated in an absolutely devastating "Magic Bus".

Any self-respecting rock fan should have a copy of this in their collection.

The cover was stamped in the manner of a bootleg release and was seen at the time to be somewhat of a stop gap measure (albeit an excellent one) that would keep their fans satiated until the follow up to Tommy materialized.

Speaking of pirate recordings, the complete show at Leeds made the rounds for years, warts and all. In the mid-90s, with the advent of far more advanced audio-post technology, the imperfections that wrote off many of the performances on the master tape were fixed. This paved the way for an expanded Leeds disc to hit the market. Great news for fans, though the die-hards knew that a full performance of Tommy was still in the vault. This officially saw the light of day in 2001 when the "Deluxe Edition" came out, thereby delivering the entire package for hard core collectors.

As of fall 2010, the lost Hull show was cleaned up and boxed with the Leeds sets. Apparently, the group had long thought that the Hull gig was far superior to that of Leeds and so the 40th anniversary edition was unveiled.

According to legend, Entwistle's bass signal was "lost" on pretty much all of the Hull recording. Seems like it was "found" just in time to mark another milestone. As with the live tapes that supposedly found their way into the pyre, it's very likely that this was an apocryphal tale.

Labels: the who live at leeds

I never get tired of listening to this album.