FLOWERS IN THE DIRT 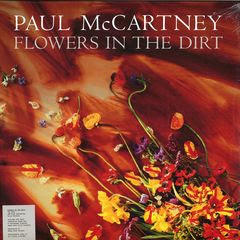 Upon its release in June 1989, this record was greeted far more warmly than anything McCartney had done since Tug of War. There was sound reason for such sentiments. Following Tug of War, his output during the decade of MTV was patchy and not terribly focused.

Pipes of Peace had the same basic ingredients as Tug of War (George Martin handling production, superstar duet action on two tracks) yet much of the material was weak. After hearing "The Other Me", it put me off from purchasing anything bearing his name for several years.

Give My Regards to Broadstreet had nothing new to offer, save for "No More Lonely Nights". The soundtrack to a poorly received feature film recast Beatles, Wings and (oddly) recent solo stuff with a ton of big name session players lending their talents. Overall, it was a fairly pointless exercise.

The "Spies Like Us" single begged the question: What happened to the guy who wrote "Live and Let Die"?

Press to Play, despite the promise of teaming with Eric Stewart, failed to make much of an impression and was seen as another misstep. Reportedly, endless tinkering in the studio drained the content of any initial spark that was present during writing sessions. More effort should have gone into song craft and the final product was met with commercial indifference.

One of the most successful artists of the 20th century was again at a crossroads. He had been written off before in the early 70s. Those who had underestimated his ambition were pleasantly surprised by Band on the Run, a subsequent run of hits and the enormous success of the Wings Over America tour.

Would he have enough left in the tank for a third act?

Compiling a retrospective hits package for issue in November of '87 was the first step back in the ring. He also included a song ("Once Upon a Long Ago") which had been submitted to director Rob Reiner for use in The Princess Bride. Though rejected for the film, McCartney deemed it worthy to put out as a taster single to help promote All The Best. For the first time in nearly five years, I went out of pocket for a new McCartney record. Flipping to the B-side for a listen, there was a little gem called "Back On My Feet" that immediately caught the ear. Co-written with one Declan McManus, this was the first road test of a new writing partnership that would spawn some very fine songs.

Still have that single. 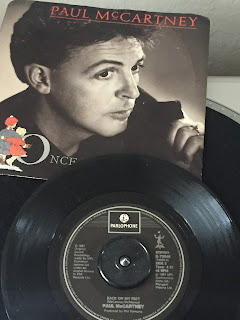 Though it is purely coincidence, the lyrical subject matter would suggest the mindset of someone who is temporarily down but has the resolve to rebound.

Give me your hand again/'Til I land again

"My Brave Face" is 45'ed and shipped out to tease the upcoming Flowers in the Dirt. Backed with a great tune called "Flying to My Home", both had been co-written with Elvis Costello. Spinning a narrative around a character who is missing their partner, the melody is solid. The hook is bolstered by a well placed guitar figure that echoes the verse. No doubt inspired by having a wordsmith like Costello to bounce ideas around with, it amounts to his sharpest work in years. There are more than a few nods to his past in the arrangement, though it comes across fresh and still holds up quite well.

As for the rest of the pack, there is much to be desired. Exquisite melodies ("Distractions", "Put It There" and "Don't Be Careless Love") mix effortlessly with punchy pop ("This One", "Figure of Eight"). In fact, "This One" could very well be the highlight of the set. Catchy, confident and riding on an infectious chorus, it bears all of the hallmarks of what this gifted man is truly capable of. For balance, "You Want Her Too" brings a bit of shade to the table with Costello playing sarcastic counterpoint to McCartney's hopeless romantic. His influence is a steadying presence here. Though he does not contribute to "We Got Married", he likely kicked Paul in a direction that freed him to craft a minor-key, dramatic storyline around a long term relationship that is not viewed through the usual rose-colored lenses.

Strength follows strength throughout the program with a few exceptions. "How Many People" and "Motor of Love" should have been elbowed as they lack the quality of all that comes before. Closing honours rightfully belonged to the majestic "That Day is Done". Similarly, in the spirit of revision to improve the overall listening experience, I would have put "Flying to My Home" in place of "Rough Ride". It is a far superior construction. The production, while considered top class for that period, tends to unjustly date stamp much of what drifts out of the speakers. Part of the problem is "too many cooks" syndrome with no fewer than four big names (plus McCartney himself) occupying the directors chair during the gestation period of this disc. That said, the result exceeded all expectations, setting the table for McCartney to return to the business of touring for the first time in a decade. More importantly, he would be doing so behind a a stellar new album.

"When I'd got the call to say Paul wanted me to write some songs with him for his next record, I didn't know what to expect, but as his last cowritten hit had been with Michael Jackson, I wondered whether I should be taking some dancing lessons."

These lines from Costello's book, Unfaithful Music, (which is a terrific read) are a glimpse into the wit and way with words that likely brought about this pairing.

He was not a contemporary of McCartney in the sense that they did not come to prominence in the same era, though he had long established his own style, had success and respect from his peers. Well aware that he was not in the same class as McCartney in terms of the business (few could make that claim) there would always be a sense of being a junior partner in the arrangement. His talent would never be in question and Elvis brought out the best in his co-writer. Neither man is known for their ability to suffer fools, yet the two were very productive during the time that they set aside to write together. Though it was fleeting, some magic definitely happened. The missed opportunity was a full blown, joint project. You can read about it elsewhere, though differing opinions on the overall production direction roundly dashed ice water on the plan to have Costello quarterback the sessions.

Luckily, Paul is a thoughtful curator of his recorded legacy and the recent addition to the ongoing Archive Collection offered all of those pristine demos along with a remastered version of Flowers in the Dirt. Unlike some material of this nature, these songs are an absolute pleasure to listen to. All are of very high calibre and tease what an alternate universe iteration of this LP may have sounded like. While the full band treatment of "My Brave Face" adds crucial elements to it that aren't fleshed out in the embryonic take, the stripped down approach still works. "Don't Be Careless Love" in skeletal form beats the album cut by a country mile. Again, with minimal retakes and bare bones augmentation this disc would have been one hell of a surprise had it been followed through properly. The consolation prize is that we have it here (in part) in excellent fidelity. Highly recommend adding this one to your collection.